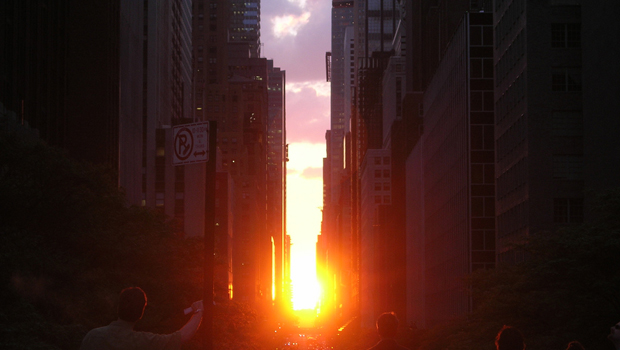 (CBS) Lo! The Manhattan solstice is upon us!

It's "Manhattanhenge" time again. Two times a year the setting sun aligns precisely with the neat grid of the streets of New York City's most densely populated borough, "creating," says celebrity astrophysicist Neil deGrasse Tyson, "a radiant glow of light across Manhattan's brick and steel canyons, simultaneously illuminating both the north and south sides of every cross street."

Tyson, director of the Hayden Planetarium at New York's Museum of Natural History, popularized the term, a takeoff on Stonehenge, where on the summer solstice "the Sun rises in perfect alignment with several of the stones, signaling the change of season."

Other cities with a regular grid, like Chicago and Toronto, also have their own 'henges, but, says Tyson, Manhattan is "ideal" because it has "a clear view to the horizon...across the Hudson River to New Jersey."