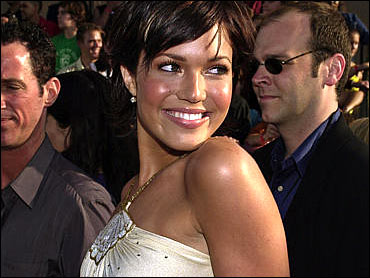 Pop star Mandy Moore continues to act as well as sing. In the new movie "Chasing Liberty," she plays the teenage daughter of an American president trying to experience life without her ever-present Secret Service agents.

A lot of people are comparing the film to the 1953 classic "Roman Holiday." But Moore says, "There's no way we can be Gregory Peck and Audrey Hepburn." As in "Roman Holiday," Moore plays a girl on an odyssey through Europe, discovering herself with her boyfriend, Ben, played by Matthew Goode.

This is the first romantic comedy she has been in, Moore tells The Early Show co-anchor Hannah Storm. "I'm such a girlie girl. I am such a romantic. It is the sort of film I would go to with my girlfriends, even if I were not involved in them. So it was nice to be on the set; you are in a gondola in Venice under a moonlit sky."

But not all is traditional romance; there is a bungee-jumping scene, which called for a double. Moore explains, "Insurance purposes. But Matthew and I were both up to doing it because it looked fun."

Moore also used a double for another key scene in which the character strips down and jumps in a river.

"I used a butt double because that was the main focus," Moore says, "I'm a pretty modest girl, and it called for my character to strip down and jump into the river and splash around. She was a little tipsy (in the scene), and I decided that was a part of the script I would call in a body double for, and she did a great job."

Having grown up in the public eye, Moore has had to make all sorts of decisions about her career and personal life. She started her singing career at age 14. Soon, she'll be 20.

Asked how she envisions herself and her future in terms of her image, Moore says, "There's always pressure in this industry, when I show up at a magazine shoot and they say, 'Show up in bikini tops and six-inch heels,' which is not me and never will be. I've had a pretty good sense of self from a young age, not to say that others don't. Obviously, they're doing what makes them comfortable. I don't have that kind of confidence. I would rather be able to hide behind the suits and look back 10 years from now and saying maybe that's not the style but I feel semi-confident." She made the cover of Cosmo this month, revealing a mature image.

Her relationship with tennis star boyfriend Andy Roddick has thrust her into the spotlight as well.

Moore says, "I think it's difficult for both of us, but probably for him more so, because he's never been used to people asking about his personal life. I think being in this industry you sort of open yourself up a bit more for that kind of scrutiny. It's odd. It's weird to talk about each other. It's weird for people to want to know bits and pieces of your relationship. And you want to keep a lot of that to yourself because once you admit you're dating, people feel you owe it to them to answer any question."

In addition to the movie, Moore also has a new album of songs called "Coverage," released a few months ago. It features cover versions of songs from the '70s and '80s.

Moore's other projects are the indie film "Saved," which is out in March and the voiceover in an animated film, "Racing Stripes."