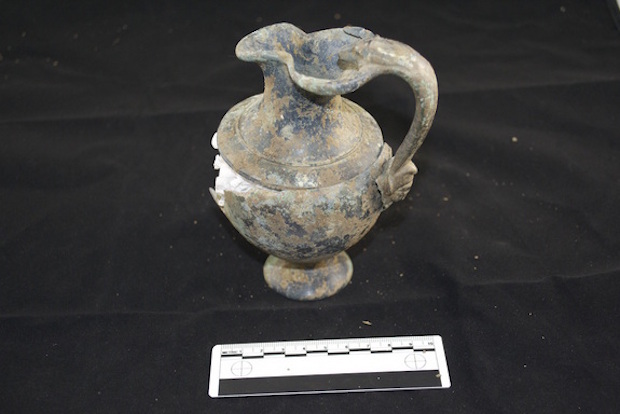 A man in England went exploring with a metal detector and made the discovery of a lifetime: an exquisitely preserved Roman-era grave filled with artifacts, including bronze jugs, mosaic glassware, coins and hobnails from a pair of shoes, all dating to about A.D. 200.

The grave likely belonged to a wealthy individual, said Keith Fitzpatrick-Matthews, the archaeology and outreach officer for the North Hertfordshire District Council. Once Fitzpatrick-Matthews and his colleagues located the grave, they also found evidence of a nearby building, likely a shrine or temple, attached to a villa.

The man with the metal detector, Phil Kirk, found the grave in a field in Kelshall, a small village located between London and Cambridge. He had once found a Roman coin in the same field, and had a hunch that there were more Roman artifacts nearby, Fitzpatrick-Matthews said. [See Photos of the Roman-Era Artifacts]

In October 2014, Kirk hit the jackpot. His metal detector led him to a buried bronze jug that stood roughly 10 inches (25 centimeters) tall. Next, he pulled out a bronze patera (a dish used for pouring wine or blood libations) and two other jugs.

Elated with what he had found, Kirk contacted local experts and told them about the findings. They returned to the spot later that month and in November and found even more artifacts: a bronze pin, an iron lamp, glassware and bottles of different shapes, including octagonal, hexagonal, rectangular and square, Fitzpatrick-Matthews said.

The hexagonal bottle held an unusual and macabre surprise.

"It quickly became apparent that the large hexagonal bottle was stuffed full with cremated bone," said Fitzpatrick-Matthews, who hadn't realized they were digging into a grave. "Suddenly, that explained everything. We were looking at a wealthy burial."

The entire grave measures about 6.2 feet by 5.2 feet (1.9 meters by 1.6 meters), and contains a plethora of Roman artifacts. They found hobnails, which are small iron nails used on the soles of leather sandals. The sandals had straps that people would tie around their legs, but the sandals must have decayed over the ages. Only the hobnails remained.

"The idea of providing footwear in a Roman grave is that the journey to the underworld, taken by the soul after death, is taken on foot to the River Styx, where you're ferried across," Fitzpatrick-Matthews told Live Science. "It's a walking journey, so you need a pair of footwear. Anybody who could afford it was buried with their best sandals." [In Photos: Ancient Roman Cemetery Unearthed]

The archaeologists also found mosaic glass plates, possibly from Egypt or western Europe; a small piece of lava; and the remains of a wooden box containing two glass cups. A silver coin, called a denarius, sat inside the box and likely slowed the wood's decomposition, Fitzpatrick-Matthews said. The coin features Emperor Trajan, who ruled Rome from A.D. 98 to A.D. 117.

A second coin helped them date the grave. The worn bronze coin sat inside the cremation urn. It likely served as payment for Charon, the man thought to ferry people across the River Styx, Fitzpatrick-Matthews said. Emperor Marcus Aurelius issued the coin in the A.D. 170s, he said.

"You never find these things in Roman burials, except in this one," Fitzpatrick-Matthews said. "The fact that it's worn means it was a good 20 to 30 years old by the time it got into the ground, which gives us a really nice date for the burial ground -- about 200."

"Everything is absolutely perfect, except for this wretched coin of Trajan," which is about 100 years younger than the other artifacts, he said. "Who knows what it's doing there. It may have been completely accidental, and have fallen into the box without anybody really noticing."

The entire grave was lined with flint, which partly smashed the artifacts under its weight, but also preserved the burial. The farmer who owns the field recalled his family noticing that area, and how the plow was unable to dig into the earth there.

The newly discovered grave fits with other clues of an earlier civilization on the farmer's property. In 1954, the farmer's family found Roman pottery in the field and donated it to a local museum.

In 2013, a circular hole about 23 feet (7 m) deep suddenly appeared in the field. Fitzpatrick-Matthews remembers looking at the hole, about 3.2 feet (1 m) in diameter, and realizing that it was the remains of a Roman well.

Now, having found the grave, the group decided to look for more clues. They found postholes, suggesting the grave neighbored a building, probably a shrine or a temple, which was attached to a villa.

"Whoever had this burial was quite clearly extremely wealthy. They've been buried with the second-century equivalent of bling," Fitzpatrick-Matthews said, referring to the lavish artifacts.

The field is about 2.5 miles (4 km) from the nearest Roman town. It's possible the buried individual worked in the town, made a lot of money and built an estate out in the country, Fitzpatrick-Matthews said.

He plans to send several bone samples from the urn to an expert, who will attempt to determine the individual's age and sex.

The archaeological findings belong to Kirk and the farmer, but Fitzpatrick-Matthews hopes to acquire funds to buy, preserve and display the artifacts in a local museum, he said.

"Once you take ancient metalwork out of the ground, it starts to degrade," he said. "We need to stabilize it again. That's done with chemical treatments."