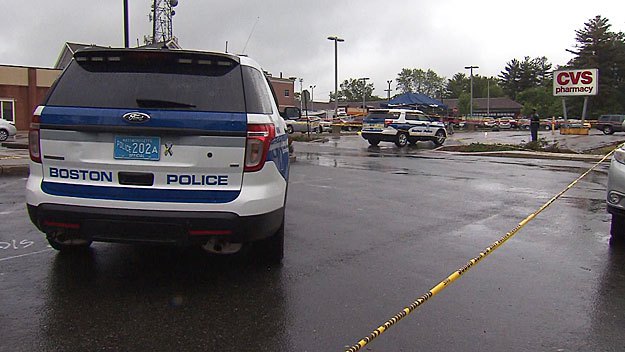 BOSTON -- A man under 24-hour surveillance by terrorism investigators was shot and killed outside a pharmacy Tuesday after he lunged with a knife at a city police officer and an FBI agent, police said.

Police Commissioner Williams Evans said members of the Joint Terrorism Task Force approached 26-year-old Usaama Rahim in the city's Roslindale neighborhood just after 7 a.m. to question him about "some terrorist-related information" they had received when he came at officers with a large military-style knife.

He said officers repeatedly ordered Rahim to drop the knife, but he continued to move toward them with it. He said task force members fired their guns, hitting Rahim once in the torso and once in the abdomen. He was taken to a hospital, where he was pronounced dead.

Evans said a "level of alarm" prompted authorities to try to question him Tuesday.

"Obviously, there was enough information there where we thought it was appropriate to question him about his doings," Evans said. "He was someone we were watching for quite a time."

Evans said the officers didn't have their guns drawn when they approached Rahim. He said police have video showing Rahim "coming at officers" while they are backing away.

That account differs from one given by Rahim's brother, Ibrahim Rahim, who said in a Facebook posting that his youngest brother was killed while waiting at a bus stop in Boston to go to his job.

"He was confronted by three Boston Police officers and subsequently shot in the back three times," he wrote. "He was on his cell phone with my dear father during the confrontation needing a witness."

Ibrahim Rahim, a former assistant imam at a Boston mosque, could not immediately be reached for more comment.

Ibrahim Hooper, a spokesman for the Council of American-Islamic Relations, said the group will monitor the investigation.

"We have a number of questions: Why exactly was he being followed? What was the probable cause for this particular stop? Were there any video cameras or body cameras of the incident? How do you reconcile the two versions of the story, the family version being that he was on his normal commute to work at a bus stop?" Hooper said.

Boston voter registration records for Usaama Rahim list him as a student. Records indicate that as recently as two years ago he was licensed as a security officer in Miami but do not specify in what capacity.

On Tuesday afternoon, authorities raided a home in Everett in connection with the case.

The officer and the agent involved in the shooting were evaluated at a hospital for what Evans described as "stress," though they weren't physically injured.