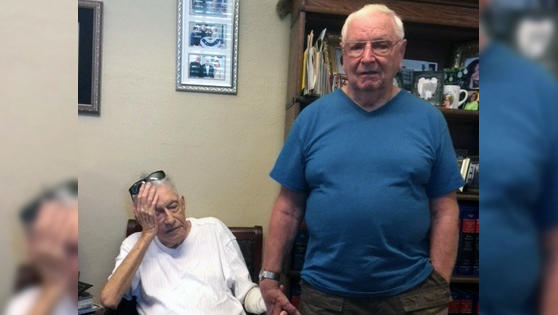 NEW ORLEANS -- A south Mississippi funeral home went back on an agreement to cremate an 86-year-old man after he died and paperwork showed he was gay, according to a lawsuit in state court.

Picayune Funeral Home had told a nephew in Colorado that Robert Huskey's body would be picked up and cremated for $1,795, and paperwork would be handled after his death, according to the lawsuit. But, it said, when the faxed-in form identified John Zawadski as Huskey's husband, the nursing home where Huskey died was told the company did not "deal with their kind."

"It was devastating. It was like losing an arm and throwing it in the garbage," said Zawadski, 83, who met Huskey in 1965 in Anaheim, California. The two lived together in California, Colorado, Wisconsin and Picayune, Mississippi, and married there on July 17, 2015, shortly after the U.S. Supreme Court struck down laws against same-sex marriage.

The funeral home's court papers deny the lawsuit's allegations. It "was filed without substantial justification, is frivolous, and is groundless in fact and law," say the papers filed March 28.

"This is not a civil rights case or a discrimination case," attorney Silas McCharen said in an email Tuesday, noting that the suit "sets forth only state law-based tort and contract claims."

Henrietta Brewer, who owns the funeral home with Ted Brewer, "denies she ever spoke the words 'deal with their kind' to anyone, including anyone at the nursing home ... Picayune Funeral Home has never refused to provide funeral services based on sexual orientation," McCharen wrote.

Although the suit asks for monetary damages, Zawadski said it has one aim: "That nobody else has to put up with this."

Huskey died May 11, 2016. The lawsuit was filed March 7. Lambda Legal, an LGBT nonprofit, joined it more recently and held a news conference Tuesday in a New Orleans suburb with Zawadski. He and Lambda Legal attorney Beth Littrell spoke with the Associated Press by phone from Slidell, Louisiana.

Littrell said she's never heard of a funeral home refusing service because of sexual orientation. "That doesn't mean it has never happened. It means it's the first time that we have heard about and we have sued about it," she said.

"It's shocking, it's unbelievable, it's disgusting that even in somebody's death people can still hold prejudices," said John Gaspari of Denver, who is related by birth to Zawadski but grew up also knowing Huskey as an uncle and is executor for both men's estates.

The lawsuit said the couple moved to Mississippi in 1997 after retiring as special education teachers. Huskey had heart bypass surgery several years ago, and eventually even hospice service wasn't enough to let Zawadski care for him at home, the lawsuit said.

Gaspari said he took on funeral arrangements to spare his Uncle Jack.

"I thought everything was taken care of," he said in a phone interview from Denver. Then a nursing home staffer called to say the funeral home wouldn't take Huskey's body -- and why.

"I was just kind of in shock -- What? What are you talking about?" Gaspari said. Then he got angry. In the meantime, "I had to scramble and try to find an alternative."

He found a crematorium in Hattiesburg, about a 75-mile drive from Picayune, but the nursing home said it had no morgue and couldn't keep Huskey's body until the crematorium's hearse arrived. So he had to find a third funeral home that would take the body immediately and hold it for an hour or two.

Huskey's body was cremated in Hattiesburg, but Zawadski said the change of location forced him to scrap plans for a memorial luncheon afterward with their friends.

Gaspari said, "My uncles didn't travel much without each other, and kissed each other good night each and every night. They never went to bed angry with each other. And something like this happens."