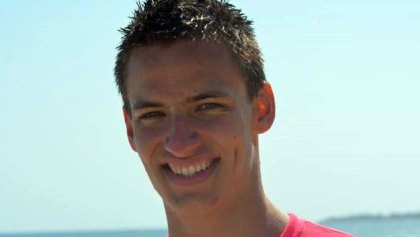 DENVER -- The family of a Tulsa man who shot himself Saturday night in Keystone, Colorado is blaming his suicide on his ingestion of edible marijuana candies, CBS Denver reports.

"It was completely a reaction to the drugs," Kim Goodman said about her son Luke's Saturday night suicide.

The 23-year-old college graduate was in the midst of a two-week ski and snowboard vacation with family members. Saturday afternoon he and his cousin, Caleb Fowler, took a bus from Keystone to Silverthorne where Fowler says they bought $78 worth of edibles and marijuana.

"He was excited to do them," Fowler told CBS4.

When the young men got back to Keystone, Fowler said they began ingesting the edible pot. He said his cousin favored some peach tart candies, each piece of candy containing 10 mg of the active ingredient in marijuana, the recommended dose for an adult consuming an edible.

But when Goodman consumed several and experienced no immediate effects he kept gobbling them up.

"Luke popped two simultaneously" after the first two didn't seem to do anything, said Fowler.

Then he said Goodman took a fifth candy, five times the recommended dose. His mother says her son likely didn't see the warning on the back of the container which says, "The intoxicating effects of this product may be delayed by two or more hours ... the standardized serving size for this product includes no more than 10 mg."

"He would make eye contact with us but didn't see us, didn't recognize our presence almost. He had never got close to this point, I had never seen him like this," Fowler said.

Fowler says Goodman became "pretty weird and relatively incoherent. It was almost like something else was speaking through him."

When family members left the condo Goodman refused to join them. After they left he got a handgun that he typically traveled with for protection, and turned it on himself.

Summit County Coroner Regan Wood says the preliminary cause of death is a self-inflicted gunshot wound. As for the impact of the marijuana edibles, she said, "That's what we've heard consistently."

She said the impact the edibles had on Goodman will be more clear when toxicology results come back in a few weeks.

"It's still under investigation," said Wood.

While definitive answers may be weeks away, Kim Goodman, Luke Goodman's mother, told CBS4 she knows why her son took his own life.

"It was 100 percent the drugs," she said. "It was completely because of the drugs -- he had consumed so much of it."

She said her son was well adapted, well-adjusted and had no signs of depression or suicidal thoughts.

"It was completely out of character for Luke ... there was no depression or anything that would leave us being concerned, nothing like that."

Caleb Fowler echoed the feeling saying he fully believed the ingestion of so much marijuana laced candy triggered the suicide.

"He was the happiest guy in the world. He had everything going for him."

A year ago a Wyoming college student jumped to his death from a Denver hotel balcony after eating a marijuana cookie. Witnesses said Levy Thamba Pongi was rambling incoherently after eating the cookie. The Denver coroner ruled "marijuana intoxication" was a significant factor in Pongi's death.

Luke Goodman's family is now planning a memorial service for Friday in Tulsa. His mother says she remembers her last interaction with her son.

"I would love to see edibles taken off the market ... I think edibles are so much more dangerous," she said.