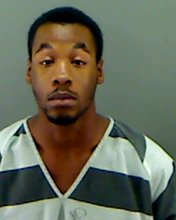 LONGVIEW, Texas - A nurse died and four people were injured Tuesday in a stabbing attack at an East Texas medical complex.

A 22-year-old man has been charged with murder in the stabbings, which happened around 7 a.m. Tuesday at the Ambulatory Surgical Center of Good Shepherd Medical Center in Longview.

Officer Kristie Brian, a Longview police spokeswoman, said it's not yet clear what led to the attack.

The slain nurse, Gail Sandidge, had been on the hospital staff since 1978, hospital CEO Steve Altmiller said at a Tuesday afternoon news conference. "She was protecting her patients by an act of courage, and she lost her life as a result," he said.

Of the four others wounded, one was in critical condition, one was in good condition and two were treated at the hospital and discharged, Altmiller said.

Templeton was at the hospital with his mother when he went on a knife-slashing rampage, Longview police said. Templeton fled on foot but was caught nearby, subdued after a brief struggle and arrested, Brian said.

Neither Templeton nor the arresting officers were injured, Brian said. A knife believed to have been the weapon used in the attack has been recovered, she said.

Surveillance video was being reviewed by the hospital's security team and would be turned over to police, said Kenny Jernigan, Good Shepherd's security director.

Good Shepherd Medical Center is a 425-bed acute-care hospital about 120 miles southeast of Dallas. All surgeries scheduled for Tuesday and Wednesday were postponed and were being rescheduled, Altmiller said.