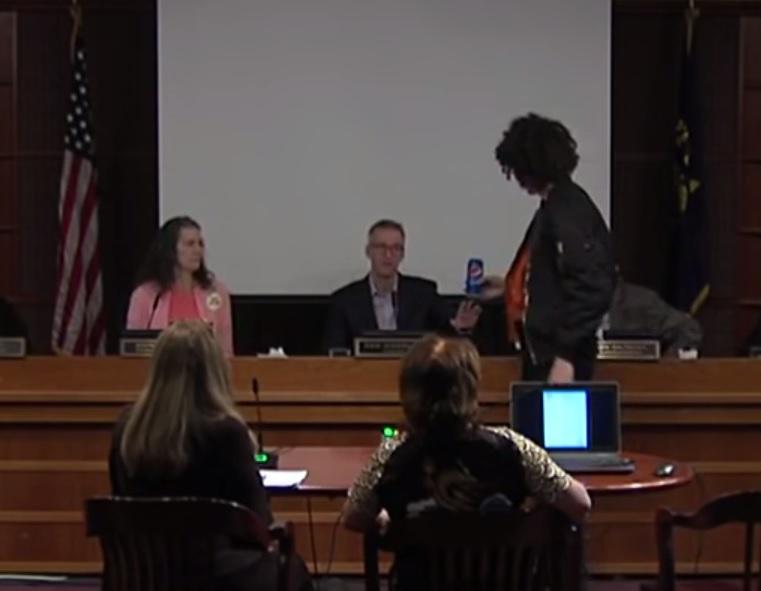 Fresh off the controversy swirling around the new Pepsi advertisement this week, a man who was at a city council meeting in Portland approached Mayor Ted Wheeler with a can of Pepsi causing a brief moment of panic on Wednesday.

The city council was discussing an ordinance that would allow the city to more easily tow boats left on city docks. In this part of the meeting, a man who was testifying started to go off on a tangent prompting the mayor to interrupt him. It was at that point he got up to approach the mayor to pull the soda can out of a jacket pocket.

“Woah, woah, not a good move, not a smart move. Don’t do that again,” Wheeler said.

The tense moment was caught on camera in a YouTube video posted online. It occurs around the two hour and 51 minute mark in the clip below:

The man initially identified himself as a former journalist with the Boston Herald, something the newspaper has since refuted.

Security personnel quickly took the can of soda and escorted the man out of the room.

Apparently this wasn’t the first time a Portland City Council meeting experienced a security scare. Mayor Wheeler has enacted tighter security measures after city hall was put on lockdown last month because of a protest over a fatal police shooting.

Wednesday’s incident concerning the Pepsi can comes after Pepsico announced it would pull an advertisement starring Kendall Jenner.

The ad was mocked after it invoked protest imagery and showed Jenner making peace with police officers by offering a can of Pepsi. It’s unclear what the people are protesting -- they hold signs that say “Join the conversation” while others simply have hearts or peace signs on theirs.

The two-minute spot focuses on Jenner in the middle of a photo shoot, donning a platinum wig, as protesters walk by, piquing her interest. Finally, she tears off her wig and joins them before confronting an officer with soda. When he takes it, everyone present smiles and cheers.