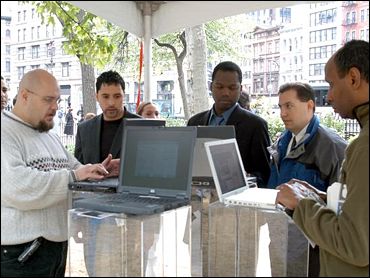 Police have arrested a man for using someone else's wireless Internet network in one of the first criminal cases involving this fairly common practice.

Benjamin Smith III, 41, faces a pretrial hearing this month following his April arrest on charges of unauthorized access to a computer network, a third-degree felony.

Police say Smith admitted using the Wi-Fi signal from the home of Richard Dinon, who had noticed Smith sitting in an SUV outside Dinon's house using a laptop computer.

The practice is so new that the Florida Department of Law Enforcement doesn't even keep statistics, according to the St. Petersburg Times, which reported Smith's arrest this week.

Innocuous use of other people's unsecured Wi-Fi networks is common. But experts say that illegal use often goes undetected, such as people sneaking on others' networks to traffic in child pornography, steal credit card information and send death threats.

Security experts say people can prevent such access by turning on encryption or requiring passwords, but few bother or even know how to do so.

Wi-Fi, short for Wireless Fidelity, has enjoyed prolific growth since 2000. Millions of households have set up wireless home networks that allow people to use the Web from their backyards but also reach the house next door or down the street.

Prosecutors declined to comment, and a working phone number could not be located for Smith.