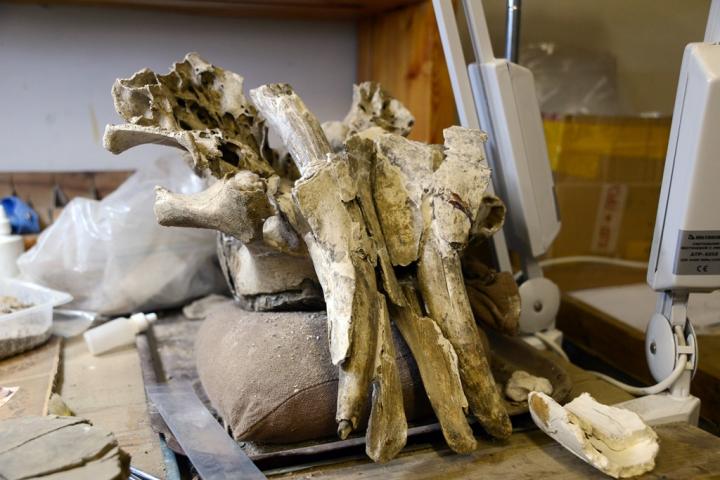 Researchers studying the bones of extinct woolly mammoths have discovered that the even when the massive beasts roamed the Earth tens of thousands of years ago, they had tired, old bones.

Over the course of ten years, scientists from Russia's Tomsk State University analyzed more than 23,500 bones and teeth of mammoths from northern Eurasia and discovered that they commonly showed signs of osteoporosis and other skeletal and joint diseases -- a strange finding that may provide a vital clue to the mysterious disappearance the megaherbivores after the last ice age.

It is not yet understood what killed off the mammoth. Climate change and hunting by humans top the list of theories. The new research, published in the latest issue of the journal Archaeological and Anthropological Sciences, adds another possibility: a diet low in vital minerals.

The authors posit that changing ecosystems at the end of the Late Pleistocene (which ended about 11,000 years ago) transformed the geochemical landscape, leading to a wide-ranging depletions in calcium, magnesium, sodium, selenium, zinc and other elements that are vital for healthy bones, muscles and skin.

As the post-Ice Age climate became more humid and warm, the mammoths' habitat gave way to a more acidic landscape that didn't provide these necessary minerals. As a result, the researchers found that animals of all sizes and ages suffered "mineral starvation," which led to osteoporosis, osetomalacia (a softening and bending of the bones) and arthrosis, which is similar to arthritis, as well as cartilage atrophy and bone fractures.

"It is highly probable that this severe natural condition lasted for more than 15,000 years and may have proven fatal for the largest representative of the terrestrial fauna at high latitudes," lead author Sergey Leshchinskiy said in a statement. "The woolly rhinoceros and cave bear may have suffered the same fate."

As acidic swamps replaced chemically favorable ground at the tail end of the Ice Age, mammoths may have been in a state of chronic mineral deficiency as much as 10 months out of the year.

Mammoths with broken bones and weak spines were less capable of feeding sufficiently and had trouble keeping up with the herd. As a result, the authors argued, were killed by predators or hunted by humans.

The fossils they studied came from excavations in regions characterized by their high macro- and micro-element content -- oases where mineral-starved mammoths may have congregated to supplement their spare diets by licking rocks, eating dirt and drinking from mineralized springs. These salt lick areas appear to have been hotbeds of activity at the end of the Pleistocene, eventually becoming "mammoth cemeteries."