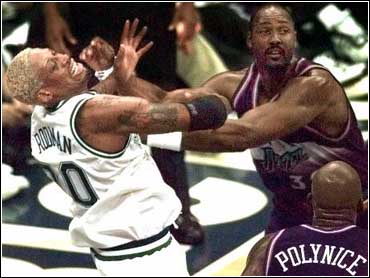 Rodman was tossed for the second time in his five games with the Dallas Mavericks, this time following another go-round with longtime sparring partner Karl Malone as Utah cruised to a 92-85 victory Thursday night.

Rodman was ejected with 4:02 left. The Jazz had to wait a bit, though, because Rodman once again took his time leaving the court following his second technical.

Rodman had a slow exit from his previous ejection and it led to a one-game suspension. He considers the league out to get him, so he probably wouldn't be surprised if it happened again.

"David Stern and Rod Thorn, they need to get their ass kicked. It's ridiculous. Just let Dennis Rodman play," he said. "I'm not throwing cheap blows. I'm not out there trying to kill anybody."

Rodman and Malone got a double foul for tripping each other early in the third quarter. Soon after, Rodman got a technical for arguing an illegal defense.

Malone was running up the court away from the ball when he and Rodman got tangled again in the fourth quarter. Rodman was called for a foul and whatever he said to the official who called it earned him his second technical.

"The referees have got to understand, people are not here to see them," Rodman said. "I do my thing. I don't take any cheap blows. I try to help the team win. I can't do that if I'm getting kicked out. It's unfair to me."

Once teammates and coaches convinced Rodman to leave the court, his traditional jersey-toss into the stands triggered a courtside fight between the team doctor and a fan.

"Dennis always has a knack of keeping the attention focused on him, even when he's walking down the street," Utah coach Jerry Sloan said.

The Mavericks are 1-4 in the games Rodman has played. The won the game he missed while suspended and had won seven of eight before he arrived.

Rodman has led Dallas in rebounding all five games, but he's scored only 10 points and made just three field goals while picking up four technical fouls. His only point against Utah came on a first-quarter free throw with his eyes closed. He was laughing so hard afterward that when he tried it again, the shot ticked the front of the net, narrowly avoiding an airball.

His 12 rebounds against the Jazz were his fewest this season.

"Dennis has a rep, whether it's a good one or a bad one, that was put on him before he was on the Mavericks and it's probably going to follow him for the remainder of his career," said Michael Finley, who scored 14. "If you had to choose who is in the wrong between him and the guy he's guarding, they're going to pick Dennis even though it's not him many times."

Malone came to Dallas a marked man because a month earlier he tussled with center Shawn Bradley, then went chest-to-chest with coach Don Nelson. Malone and Nelson ended up getting fined $10,000 and Nelson was suspended for one game. Rodman's recent signing with the Mavericks made things even more likely to escalate.

Malone knew what to expect and was ready for it. Afterward, he wasn't interested in talking about the game or Rodman.

"It is just the Dallas Mavericks on the schedule," Malone said. "I think they are playing better anyway. He just added another dimension to it."

Jeff Hornacek said the Jazz were ready for Rodman.

"You go into the game knowing that those things are going to happen. That's his game," Hornacek said. "He is trying to get guys off their focus. On most people he plays against, he does a terrific job of getting those guys' focus off, but we have played him enough to where we don't let it affect us."

Physical and verbal jabs were thrown throughout the first half, but they seemed to mainly motivate the Mavericks and their sellout crowd. Dallas overcame several deficits, but never led by more than three.

They had tied the game at 72, but Utah was up 77-72 when Rodman was tossed. The lead grew to 10 and was never lower than five the rest of the way.

Bryon Russell led the Jazz with 25 points and Malone had 18 points, 10 rebounds and six assists.

Hornacek scored 14 and had a season-high seven rebounds. Greg Ostertag, a Dallas-area native, had a season-best six blocks.