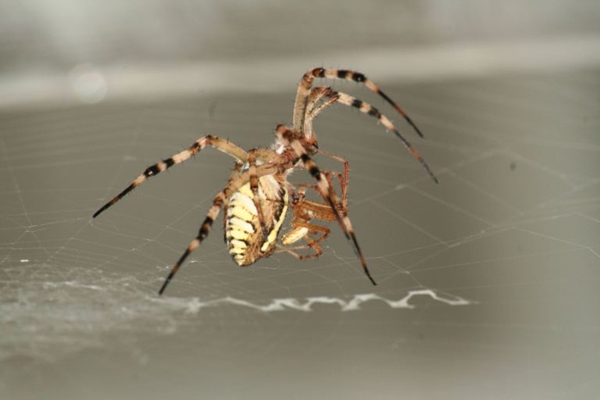 (By Adam Hadhazy This story originally appeared on LiveScience)

Male spiders that get to have sex only once or twice in their lives are far more interested in a female spider's virginity than in her size, according to a new study. The finding surprised scientists, who noted that larger females tend to be more fertile.

Most male wasp spiders have only a single shot at love because their female partners eat them right after copulation. Even those (doubly) lucky guys that escape this sexual cannibalism, however, can mate only one more time before their skirt-chasing days are over.

That's because during sex, the male will intentionally snap off one of his two genitalia inside his lady friend in an attempt to keep her from getting impregnated by future suitors.

This cringe-inducing strategy often pays off: Males that penetrate and "plug" a female first have a threefold edge in ultimately becoming daddies.

Therefore, for wasp spiders, scoring a virgin female evolutionarily trumps having sex with a plumper partner that could produce more eggs and offspring.

The study's findings illustrate an unusual battle of the sexes in the animal kingdom. "Usually the general wisdom is that the male sex has a large number of sperm cells, so the male is rather unlimited [in fertilizing] as many females as he can find," said Jutta Schneider, a professor of behavioral ecology at the University of Hamburg, Germany, and a co-author of the study published in the October issue of Animal Behaviour. "But it's very different in these spiders."

How spiders hook up

Though male wasp spiders have testes that produce sperm, they lack penises. Instead, the arachnids ejaculate into a small web and then store this sperm in special forelegs called pedipalps, which "look like boxing gloves," said Schneider.

To initiate mating, a male spider enters a female's web and vibrates it. She next assumes a characteristic copulation position - face down, body up - in the center of her web. Then the male approaches from the front and thrusts a pedipalp into one of the two genital ducts in her belly.

Here's where things get dangerous.

"At the second of genital contact - it's very easy to observe - the female suddenly bends, and it looks like he stabs her," Schneider said. "Then he has only seconds to complete his mission before she starts to take silk out of her spinnerets" in order to ensnare him.

Over 70 percent of male wasp spiders end up as a post-coital meal this way.

For the experiment, researchers placed two females - one heftier than the other - before roving male spiders in the laboratory and in nature.

Regardless of how voluptuous they were, most female spiders received a randy male visitor or two. But contrary to the researchers' expectations, virgins emerged as the clear favorite. Among 21 pairs of females wherein one female went from virgin to non-virgin, the virgins attracted and mated with 12 male spiders. Only one male opted to have sex with an experienced partner.

Key to the male's ability to be choosy is the fact that virgin females send out a pheromone - an airborne chemical messenger - that alerts a male to their chastity. This signal shuts off upon mating. (Although a female is still a "one-sided" virgin after her first coupling, males apparently cannot tell when one of her two ducts remains unplugged.)

Not just any maiden will do

Maydianne Andrade, an evolutionary ecologist at the University of Toronto, Scarborough who was not involved with the study, described it as "well-designed" and "convincing."

"Theory suggests males may be very choosy about female body size or condition, since this determines egg number," Andrade said in an e-mail. "But this study says no - either males pay no attention to female body size, or the effect is so weak that it pales in comparison to the male's preference for virgins."

Yet the males did not mate with virgins indiscriminately, the researchers noted.

"The males were not indifferent - they would not just go for any virgin female and mate with her," Schneider said. Many females that they encountered "were left virgin."

In another recent study in Biology Letters, Schneider and colleagues suggested a reason why. Male spiders, it seems, can detect if a potential paramour is actually one of their sisters who, like them, never wandered too far from the shrub of their birth.

Nature strongly selects against inbreeding, Schneider said, so it would make sense that some subtle biological cue would put the kibosh on incest.

For this other experiment, lab researchers paired up sibling and non-sibling spiders of opposite genders. It turned out that when having sex with a sister, brother spiders copulated for a shorter period of time than with a non-sibling -- lessening the likelihood of being devoured, and increasing the chance of later mating with a more reproductively compatible female.

Schneider suspects that intercourse between siblings does not occur in nature; males can pass on a sister's web to instead flirt with the unrelated spider girl next door.