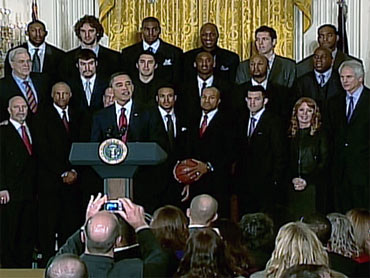 As it turns out, women aren't the only ones who go through these mid-life changes. So do men. But, is there really such a thing as male menopause?

That's among the topics explored in the new book, "From Boys to Men: A Woman's Guide to the Health of Husbands, Partners, Sons, Fathers and Brothers."

It was co-written by The Early Show medical correspondent Dr. Emily Senay, who says that, while men are spared hot flashes and crying jags, they do go though hormonal changes that can leave even a tough guy reeling.

It's part of what's called andropause or male menopause. And, when a man suffers from it, it is the women in his life who are usually the first to notice that something is wrong.

Randy Lannacone lost 200 pounds, saved his life, and rescued his marriage from his mid-life crisis.

"I had gained so much weight, I wasn't able to shower," says Lannacone. "I was walking around with an oxygen bottle. I was in bad shape. I was on the way out. But I just figured I was going to die."

For three years, his wife and law partner Jeanne Lannacone sought out one specialist after another, trying to get to the root of Randy's obesity, diabetes and depression.

During that time, Randy Lannacone's weight surpassed a life-threatening 400 pounds. Finally, Jeanne gave him an ultimatum.

"I said, 'You either check yourself into a hospital, or I want you out of here,'" says Jeanne Lannacone.

Threatened with divorce, Randy landed in New York City's Mount Sinai Hospital and in the care of Dr. Natan Bar-Chama, director of Male Reproductive Medicine. He determined that the culprit in Randy's case was an almost non-existent level of testosterone -- the hormone that gets a bad rap for turning men into overly-aggressive iron-pumping, speed-loving, risk-taking womanizers.

"Testosterone is a critical hormone for men," says Bar-Chama. "It is involved, obviously in libido, the desire for sexual activity. But that's just the tip of the iceberg."

Because testosterone helps to maintain the male body, it is important to mental aptitude, bone density and healthy weight. Normally, men begin to lose about one-percent of testosterone a year, beginning at age 40. Most don't have serious symptoms, but for some, like Lannacone, levels sink so low that their entire lives are affected. Often it takes a man's wife or girlfriend to see the difference.

"He's not able to step back and see the impact of lethargy and fatigue and diminished libido and depression, says Bar-Chama. "If you have a low testosterone, your muscle mass is going to diminish, your fat adipose tissue is going to increase, and subsequently, you're at risk for cardiovascular disease, diabetes, and the severe medical problems associated with those conditions."

And, according to Bar-Chama, a man will not be able to lose an ounce without testosterone in his body.

What turned things around for Randy Iannacone were large injections of testosterone because his case was extreme. But for most men, a blood test can determine if there's a need for small doses of the hormone, which can be delivered pain-free.

Things are looking up now for Randy, who credits the wife he almost lost with helping him to find a reason to live.

"Jeanne was motivated by love: love for our daughter and love for herself," says Randy Lannacone. "Obviously that reflected on me, because her motivation was not out of malice. It was out of love."

There is still a lot of research to be done before testosterone therapy would ever be recommended broadly. But, Senay says, men should be aware of the effects of low testosterone because those men with truly low testosterone may benefit from therapy.

To read an excerpt of "From Boys to Men," click here.

Wednesday: Dr. Emily Senay discusses how parents can talk with boys about sex.