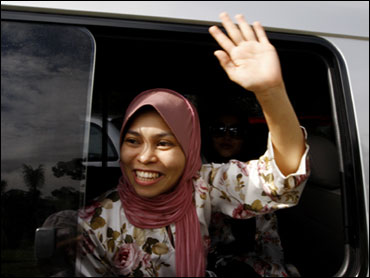 Malaysia abruptly granted a Ramadan reprieve to the first Muslim Malay woman to be sentenced to caning for drinking beer, but insisted Monday the thrashing would still take place after the Islamic holy month of fasting.

Kartika Sari Dewi Shukarno, a 32-year-old mother of two, had been en route to a women's prison for the caning when Islamic officials who took her into custody drove her back home and released her.

Mohamad Sahfri Abdul Aziz, a state legislator in charge of religious affairs, later said the Attorney General's office advised that the caning should be delayed for compassionate reasons until after the Muslim fasting month of Ramadan, which began Saturday.

"The sentence is not being canceled," Mohamad Sahfri told The Associated Press.

Amnesty International condemned the sentence, and many critics had said the caning would harm Malaysia's reputation as a moderate Muslim-majority country.

Kartika was arrested in a raid for drinking beer at a hotel lounge in December 2007 and accused of breaching Malaysia's Shariah law, which forbids Muslims from consuming alcohol.

The law provides for a three-year prison term and caning for Muslims caught drinking, but most offenders are fined. Drinking is legal for non-Muslims.

Kartika was sentenced to six strokes of a rattan cane by the Shariah court in July in what was considered a warning to other Muslims to abide by religious laws.

In an interview with the AP last week, Kartika said she wanted to be caned because "I want to respect the law."

Kartika's sister, Ratna, said Kartika was "very stressed" because of the unexpected delay.

Islamic authorities had insisted that the purpose of the caning is to educate rather than punish. They say the rattan cane supposed to be used on Kartika would be smaller and lighter than the one used for men and that she will remain clothed.

Men convicted of crimes such as rape and bribery in Malaysia are caned on their bare buttocks, breaking the skin and leaving permanent scars.