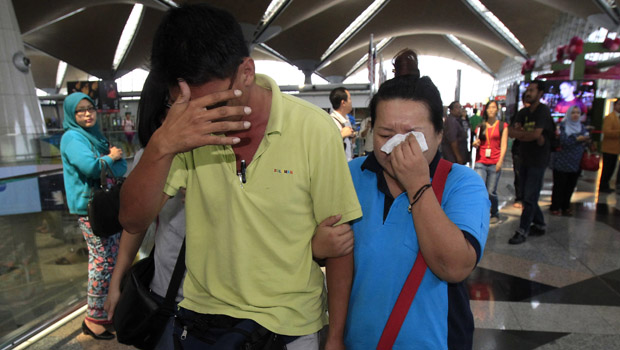 KUALA LUMPUR - Malaysia Airlines said it was "fearing the worst" on Sunday for a plane carrying 239 people that went missing more than 24 hours ago, as the government said it was investigating four passengers who may have held false identity documents.

There were no reports of bad weather and no sign of why Flight MH370 would have vanished from radar screens off the coast of Vietnam about an hour after it took off from Kuala Lumpur bound for Beijing early on Saturday morning.

European officials said it appeared two people on board were using stolen passports and Malaysian Transport Minister Hishamuddin Hussein said authorities were also checking the identities of two other passengers.

He said help was also being sought from the FBI. However, an attack was only one of the possibilities being investigated.

"We are looking at all possibilities," he said. "We cannot jump the gun. Our focus now is to find the plane."

It was not immediately clear if the Chinese person's identity was among those being investigated.

There were no confirmed signs of the plane or any wreckage on Sunday, well over 24 hours after it went missing. Search operations continued through the night, officials said.

Foreign ministry officials in Rome and Vienna confirmed Saturday that names of two nationals listed on the manifest of the missing Malaysia Airlines flight match passports reported stolen in Thailand.

And on Saturday Vietnamese air force planes spotted two large oil slicks close to where the Boeing 777 went missing earlier in the day, the first sign that the aircraft carrying 239 people had crashed.

Malaysia's deputy civil aviation authority chief, Azhaddin Abdul Rahman, told reporters that the air search, which had been suspended for the night, resumed Sunday, in addition to a sea search that continued through the darkness.


Neither European was on the plane, which disappeared less than an hour after it took off from Kuala Lumpur bound for Beijing, officials said. The Italian was traveling in Thailand and the Austrian was located in his native country. In Washington, the State Department confirmed that three Americans were aboard the jet. Spokeswoman Jen Psaki said in a statement that officials from the U.S. Embassies in Kuala Lumpur, Malaysia and Beijing were in contact with families of the passengers.


A Malaysia Airlines passenger manifest provided to CBS News identifies one of the Americans as Philip Wood, an IBM executive from North Texas.

And an Austin, Texas, technology company known as Freescale Semiconductor confirmed that it had 20 employees from Malaysia and China on the flight.

The father of the Italian man told The Associated Press that his son's passport had been stolen about a year and a half ago while traveling in Thailand.

"He deposited it with rental car agency, and when he returned the car it was gone," Walter Maraldi said by telephone from his home in the northern Emilia-Romagna region.

The Italian man had a new passport issued in Thailand to continue his trip, his father said. The Italian Interior Ministry issued a statement that the man also reported it stolen on Aug. 1, 2013, after his return to Italy, and that the stolen document had been entered into the Interpol database.

Walter Maraldi said authorities could not tell him whether the stolen passport or a counterfeit copy was used by a passenger to board the aircraft.

The father said his son Luigi Maraldi, 37, called his parents from Thailand to tell them he was fine after hearing news reports that an Italian with his name was on board the missing airplane.

Austrian Foreign Ministry spokesman Martin Weiss confirmed that a name listed on the manifest matches an Austrian passport reported stolen two years ago in Thailand. Weiss would not confirm the Austrian traveler's identity.

"We have no information on who might have stolen the passport," Weiss said.

The oil slicks were spotted late Saturday off the southern tip of Vietnam and were each between 6 miles and 9 miles long, the Vietnamese government said in a statement. There was no confirmation that the slicks were related to the missing plane, but the statement said they were consistent with the kinds that would be produced by the two fuel tanks of a crashed jetliner.

U.S. safety officials said a team of experts was en route to Asia to be ready to assist in the investigation. The team includes accident investigators from National Transportation Safety Board, as well as technical experts from the Federal Aviation Administration and Boeing.

Malaysia Airlines CEO Ahmad Jauhari Yahya said there was no indication that the pilots had sent a distress signal, suggesting that whatever happened to the plane occurred quickly and possibly catastrophically.

Ignatius Ong, CEO of Malaysia Airlines subsidiary Firefly airlines, said the plane was last inspected 10 days ago and was "in proper condition."

Two-thirds of the plane's passengers were from China, while others were from elsewhere in Asia, North America and Europe.

At Beijing's airport, authorities posted a notice asking relatives and friends of passengers to gather at a nearby hotel to wait for further information, and provided a shuttle bus service. A woman wept aboard the bus while saying on a mobile phone, "They want us to go to the hotel. It cannot be good."

Relatives and friends of passengers were escorted into a private area at the hotel, but reporters were kept away. A man in a gray hooded sweatshirt later stormed out complaining about a lack of information. The man, who said he was a Beijing resident but declined to give his name, said he was anxious because his mother was on board the flight with a group of 10 tourists.

"We have been waiting for hours and there is still no verification," he said.

The plane was last detected on radar at 1:30 a.m. (12:30 p.m. ET Friday) around where the South China Sea meets the Gulf of Thailand, authorities in Malaysia and Vietnam said.

The plane "lost all contact and radar signal one minute before it entered Vietnam's air traffic control," Lt. Gen. Vo Van Tuan, deputy chief of staff of the Vietnamese army, said in a statement.

The South China Sea is a tense region with competing territorial claims that have led to several low-level conflicts, particularly between China and the Philippines. That antipathy briefly faded Saturday as China, the Philippines, Vietnam, Singapore and Malaysia all sent ships and planes to the region.

Najib said Malaysia had dispatched 15 planes and nine ships to the area. The U.S. Navy was sending a warship and a surveillance plane, while Singapore said it would send a submarine and a plane. China and Vietnam also were sending aircraft to help in the search.

It's not uncommon for it to take several days to find the wreckage of aircraft floating on the ocean. Locating and then recovering the flight data recorders, vital to any investigation, can take months or even years.

"In times of emergencies like this, we have to show unity of efforts that transcends boundaries and issues," said Lt. Gen. Roy Deveraturda, commander of the Philippine military's Western Command.

The plane was carrying 227 passengers, including two infants, and 12 crew members, the airline said. It said there were 152 passengers from China, 38 from Malaysia, seven from Indonesia, six from Australia, five from India, three from the U.S., and others from Indonesia, France, New Zealand, Canada, Ukraine, Russia, Taiwan and the Netherlands.

In Kuala Lumpur, family members gathered at the airport, but were kept away from reporters.

"Our team is currently calling the next of kin of passengers and crew. Focus of the airline is to work with the emergency responders and authorities and mobilize its full support," said Ahmad Jauhari, the airline CEO. "Our thoughts and prayers are with all affected passengers and crew and their family members."

Fuad Sharuji, Malaysia Airlines' vice president of operations control, told CNN that the plane was flying at an altitude of 35,000 feet when it disappeared and that the pilots had reported no problem with the aircraft.

Malaysia Airlines has a good safety record, as does the 777, which had not had a fatal crash in its 19-year history until an Asiana Airlines plane crashed in San Francisco in July 2013, killing three passengers, all teenagers from China.

Airliner "black boxes" - the flight data and cockpit voice recorders - are equipped with "pingers" that emit ultrasonic signals that can be detected underwater. Under good conditions, the signals can be detected from several hundred miles away, said John Goglia, a former member of the U.S. National Transportation Safety Board. If the boxes are trapped inside the wreckage, the sound may not travel as far, he said. If the boxes are at the bottom of an underwater trench, that also hinders how far the sound can travel. The signals also weaken over time.

Air France Flight 447, with 228 people on board, disappeared over the Atlantic Ocean en route from Rio de Janeiro to Paris on June 1, 2009. Some wreckage and bodies were recovered over the next two weeks, but it took nearly two years for the main wreckage of the Airbus 330 and its black boxes to be located and recovered.

The tip of the wing of the same Malaysian Airlines Boeing 777-200 broke off Aug. 9, 2012, as it was taxiing at Pudong International Airport outside Shanghai. The wingtip collided with the tail of a China Eastern Airlines A340 plane. No one was injured.

Malaysia Airlines' last fatal incident was in 1995, when one its planes crashed near the Malaysian city of Tawau, killing 34 people. The deadliest crash in its history occurred in 1977, when a domestic Malaysian flight crashed after being hijacked, killing 100 people.

In August 2005, a Malaysian Airlines 777 flying from Perth, Australia, to Kuala Lumpur suddenly shot up 3,000 feet before the pilot disengaged the autopilot and landed safely. The plane's software had incorrectly measured speed and acceleration, and the software was quickly updated on planes around the world.

Malaysia Airlines has 15 Boeing 777-200s in its fleet of about 100 planes. The state-owned carrier last month reported its fourth straight quarterly loss and warned of tougher times.