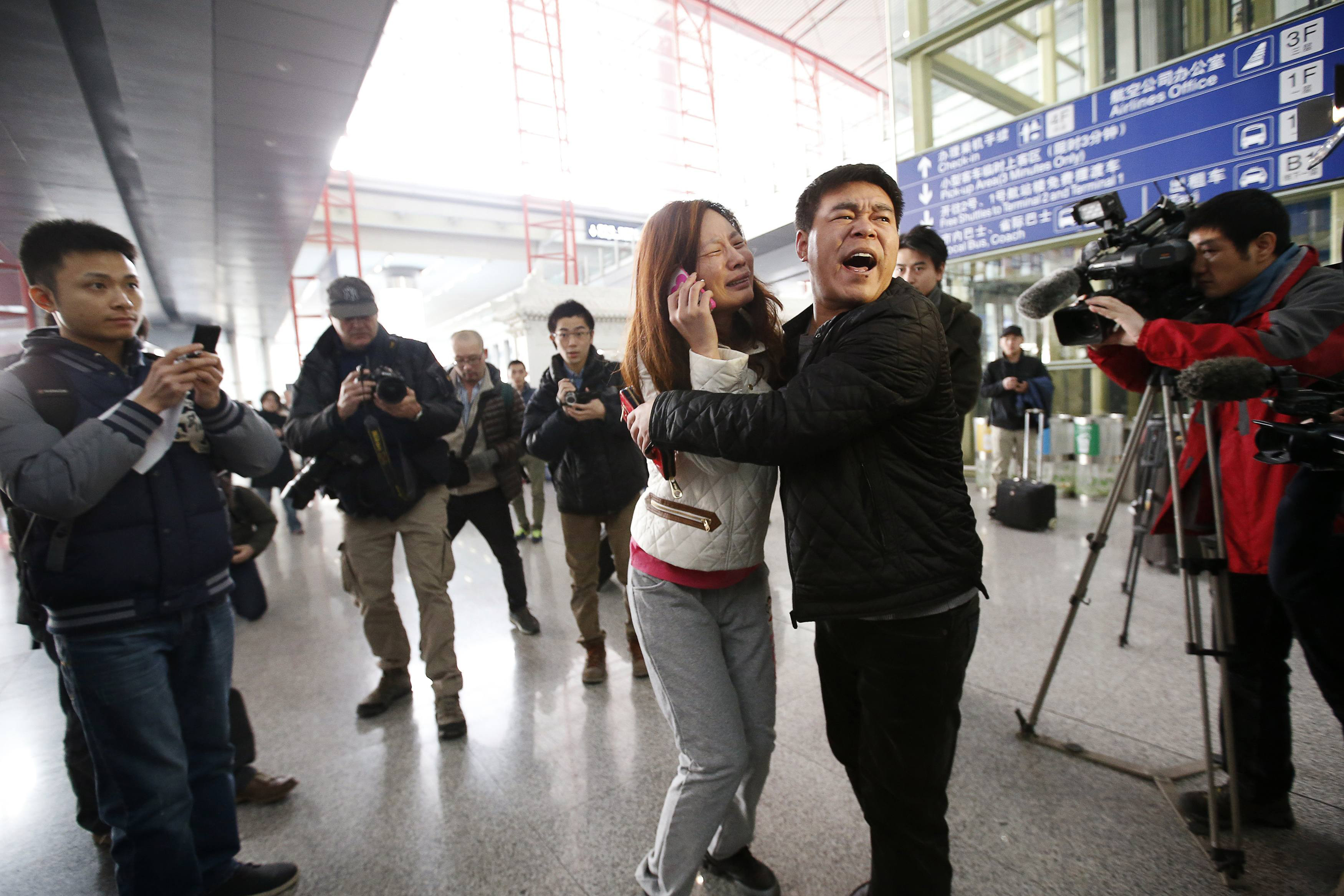 A Malaysia Airlines flight carrying 239 people from Kuala Lumpur to Beijing went missing over the South China Sea on Saturday, prompting China to send ships to scour the water for possible wreckage.

The airline, speaking several hours after the plane had been due to land in the Chinese capital, said it was still too early so say whether the aircraft had crashed. It said there had been no distress signal and it cited early speculation that the plane may have landed in Nanming in southern China.

As news of the disappearance filtered through to distraught friends and relatives who had been waiting for the flight to arrive in Beijing, Malaysia Airline said it was still investigating and took no questions at a brief news conference.

"Our team is currently calling the next-of-kin of passengers and crew," the airlines' group chief executive officer, Ahmad Jauhari Yahya, said in a statement. "Focus of the airline is to work with the emergency responders and authorities and mobilize its full support."

"Our thoughts and prayers are with all affected passengers and crew and their family members," he said.

The airline said that the Boeing 777-200 aircraft had 227 passengers, including two infants, and 12 crew members on board.

It said the passengers were of 13 different nationalities, including 153 from China and four from the United States.

Flight MH370 departed from Kuala Lumpur at 12:41 a.m. Saturday local time, according to a statement from the airline. It was scheduled to land in Beijing at 6:30 a.m.

The plane last had contact with air traffic controllers two hours after it took off 120 nautical miles off the east coast of the Malaysian town of Kota Bharu, the airline said on Saturday.

Malaysian and Vietnamese authorities were working jointly on search operations in the area. China has dispatched two maritime rescue ships to the South China Sea to help in rescue work, state television reported.

An official at the Civil Aviation Authority of Vietnam said the plane had failed to check in as scheduled while it was flying over the sea between Malaysia and Ho Chi Minh City.

No signal had been picked up from the plane in Vietnam, a Vietnamese rescue official said on Saturday.

"We have been seeking but no signal from the plane yet," Pham Hien, director of a Vietnam maritime search and rescue coordination center in Vung Tau, told Reuters by telephone.

Vietnamese and Chinese media had reported that a signal from the plane had been picked up. The reports did not identify what kind of signal.

"The information on local media about the signal near the Cape Ca Mau was inaccurate," Pham said.

In Beijing, Chinese Foreign Minister Wang Yi told reporters, "We are extremely worried. We are doing all we can to get details. The news is very disturbing. We hope everyone on the plane is safe."

China is helping to locate the aircraft, Chinese state television said on one of its official microblogs.

The flight was piloted by Captain Zaharie Ahmad Shah, a Malaysian aged 53, according to the airline. He has a total of 18,365 flying hours and joined Malaysia Airlines in 1981.

Distressed family members of those on board had begun gathering at Beijing airport on Saturday.

Chang Ken Fei, a Malaysian waiting at Beijing airport for friends to arrive, said: "I got here at seven (a.m.). At first I thought the plane was just delayed as normal, so I came a bit later. I've just been waiting and waiting. I asked them what was going on but they just tell us, 'We don't know.'"

If the plane is found to have crashed, the loss would mark the second fatal accident involving a Boeing 777 in less than a year, after an unblemished safety record since the jet entered service in 1995.

Boeing said it was aware of reports that the Malaysia Airlines plane was missing and was monitoring the situation but had no further comment.