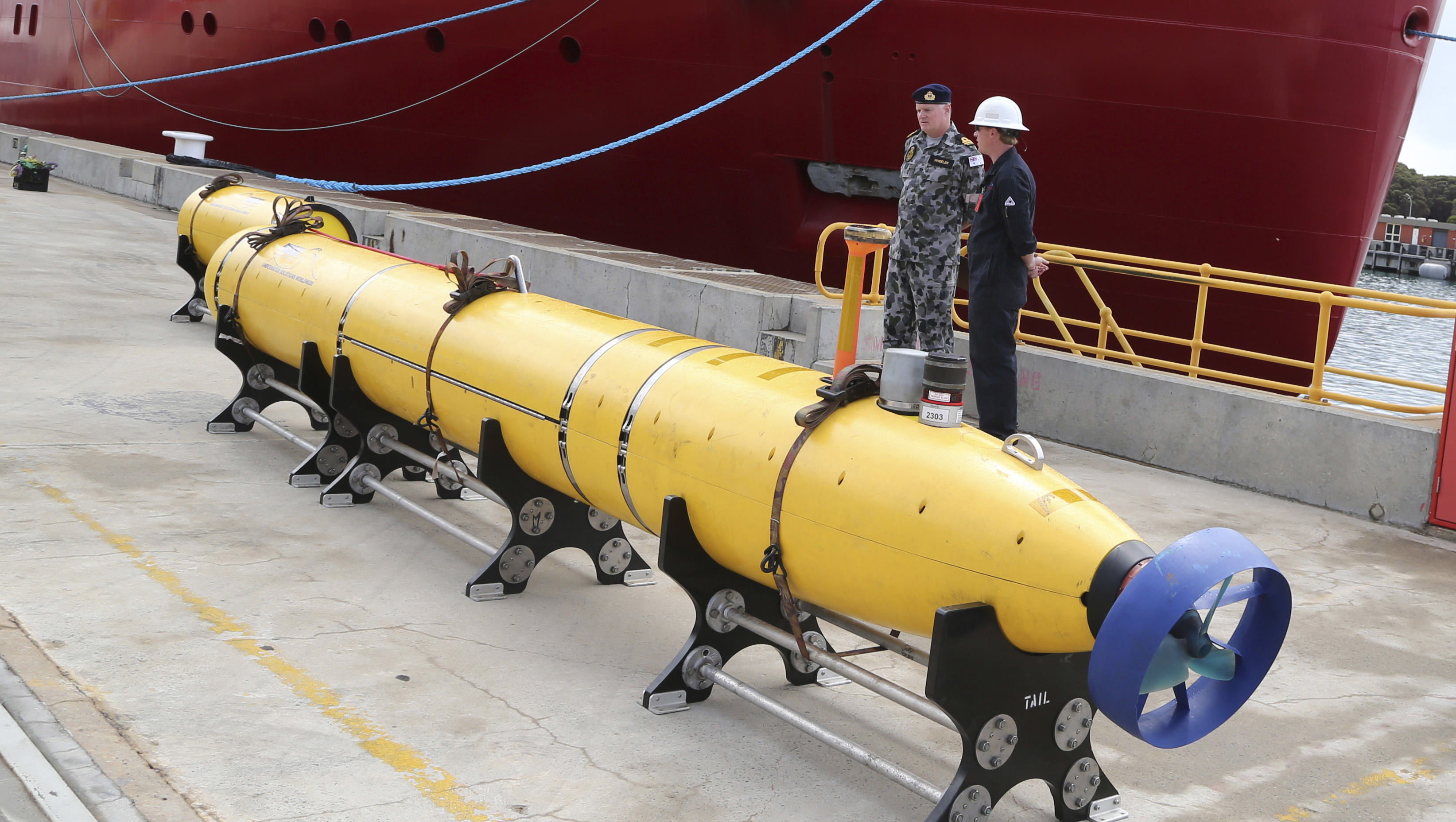 PERTH, Australia -- A U.S. Navy device designed to detect a plane's black box underwater was ready to be taken Monday to the remote scene where search teams are racing to find the flight data recorders from Malaysia Airlines Flight 370.

The Australian Maritime Safety Authority, which is coordinating search efforts in the vast Indian Ocean, said the Australian warship Ocean Sield was to depart from Perth on Monday morning with a black box detector and an autonomous underwater device that searches for debris underwater.

The ship was expected to take three or four days to reach the search area, which is roughly the size of Poland and located 1,150 miles west of Australia. And time is fast running out.


Every plane's black box is fitted with a low-frequency acoustic beacon that, when activated after a crash, emits a unique, continuous "ping" for searchers to detect. The beacon has a battery life of roughly 30 days.

A host of environmental factors, from depth and temperature of the water to the relative damage done to the equipment, can affect both the life of the battery and the ease of the search.

That gives the people searching for Flight 370 a little more than a week, perhaps 10 days at most, to not just pinpoint the place where a 240-foot plane may have gone down in a roughly 200,000-square-mile area, but also find it on the ocean floor

Flight 370 vanished on March 8 while en route from Kuala Lumpur, Malaysia, to Beijing. Malaysian officials say they believed the Boeing 777 crashed into the Indian Ocean and that all 239 people on board perished.

More
Although crews have spotted many pieces of debris in the ocean, authorities have not been able to confirm that any of it came from Flight 370.

The frequency acoustic beacon has a range of up to 12,000 feet, or 2.2 miles or so, and the Ocean Shield will be towing a ping locator with the capability to do search and recovery operations down to a depth of 20,000 feet.

The ship's captain, Nicholas Woods, said the Ocean Shield can "stay out there for an extended period. It means we will be on location for as long as it takes to achieve a positive outcome."

Data on Flight 370's black boxes may help investigators solve what has become one of aviation's big mysteries - what happened to Flight 370, with speculation ranging from equipment failure and a botched hijacking to terrorism or an act by one of the pilots.

Nine aircraft and eight ships searching the waters off western Australia on Sunday found only "fishing equipment and other flotsam" not connected to the Malaysia Airlines plane, the Australian Maritime Safety Authority said.

But at least four orange objects that were more than 6 feet in size were seen by the crew of an Australian P3 Orion search plane, said the pilot, Flight Lt. Russell Adams, after returning to base.

"I must stress that we can't confirm the origin of these objects," he said, adding that images of the items have yet to be verified, and a GPS buoy was dropped and ships must still investigate.

Adams said it was "the most visibility we had of any objects in the water and gave us the most promising leads."Ten planes and 10 ships were taking part in Monday's search, the Australian maritime agency said, with some parts of the mammoth search zone expected to experience low clouds and rain - similar to Sunday's weather.

"We have got to have conclusive visual evidence of debris," said Cmdr. William Marks, a spokesman for the U.S. Navy's 7th Fleet, appearing on CBS' "Face the Nation." ''That is the most important thing. So we have to keep flying these missions out of Perth."

For a full week, searchers relied on satellite imagery from various countries as they tried to find the plane in a zone to the south of the current area. They abruptly shifted the site Friday after authorities concluded the plane could not have traveled as far as they had thought based on its estimated speed and fuel consumption.

That prompted the change in the search for the plane's likely entry point into the sea and the possible location of its flight recorders, or "black boxes," which should contain clues to what caused the aircraft to fly so far off-course.

The search area is so big that investigators are first hoping to find floating debris so they could set a smaller zone using sophisticated analysis to determine a location from where the pieces drifted. Even if they do that, recovering the flight recorders could be complicated. Despite the huge area, one advantage is the seabed of the search zone is generally flat, with the exception of a steep slope and a deep trench near its southern end.

The area is dominated by a muddy ocean floor known as Broken Ridge, which is actually a plateau where depths range from as shallow as about 2,625 feet to about 9,843 feet.

At the edge of the plateau closest to Antarctica is the Diamantina trench, which has been found to be as deep as 19,000 feet within the confines of the search zone, although it could be deeper in places that have not been measured.

Matthews said the Navy's ping locator has the "capability to do search-and-recovery operations down to a depth of 20,000 feet."

If searchers don't get a location on the pinger, Marks said, "we then have to very slowly use sonar to get an image, a digital image of the bottom of the ocean. And that is incredibly - a long process to go through. But it is possible."

Information on the flight data and cockpit voice recorders may help investigators resolve what happened on Flight 370. Speculation includes equipment failure, a botched hijacking, terrorism or an act by one of the pilots.Capt. Mark Matthews, who is in charge of U.S. Navy salvage operations, said Matthews said the Navy's ping locator has the "capability to do search-and-recovery operations down to a depth of 20,000 feet."

If searchers don't get a location on the pinger, Matthews said, "we then have to very slowly use sonar to get an image, a digital image of the bottom of the ocean. And that is incredibly - a long process to go through. But it is possible."

He warned, however, that the search could go on for years.

"Right now, the search area is basically the size of the Indian Ocean, which would take an untenable amount of time to search," he told Reuters news agency.

Faced with growing anger from relatives of Flight 370's mostly Chinese passengers, Malaysian Prime Minister Najib Razak said the search would go on for as long as it takes.

An official tweet from Najib on Sunday said, "My thoughts are with the family members of #MH370."

He added: "We will not rest until the plane is found."