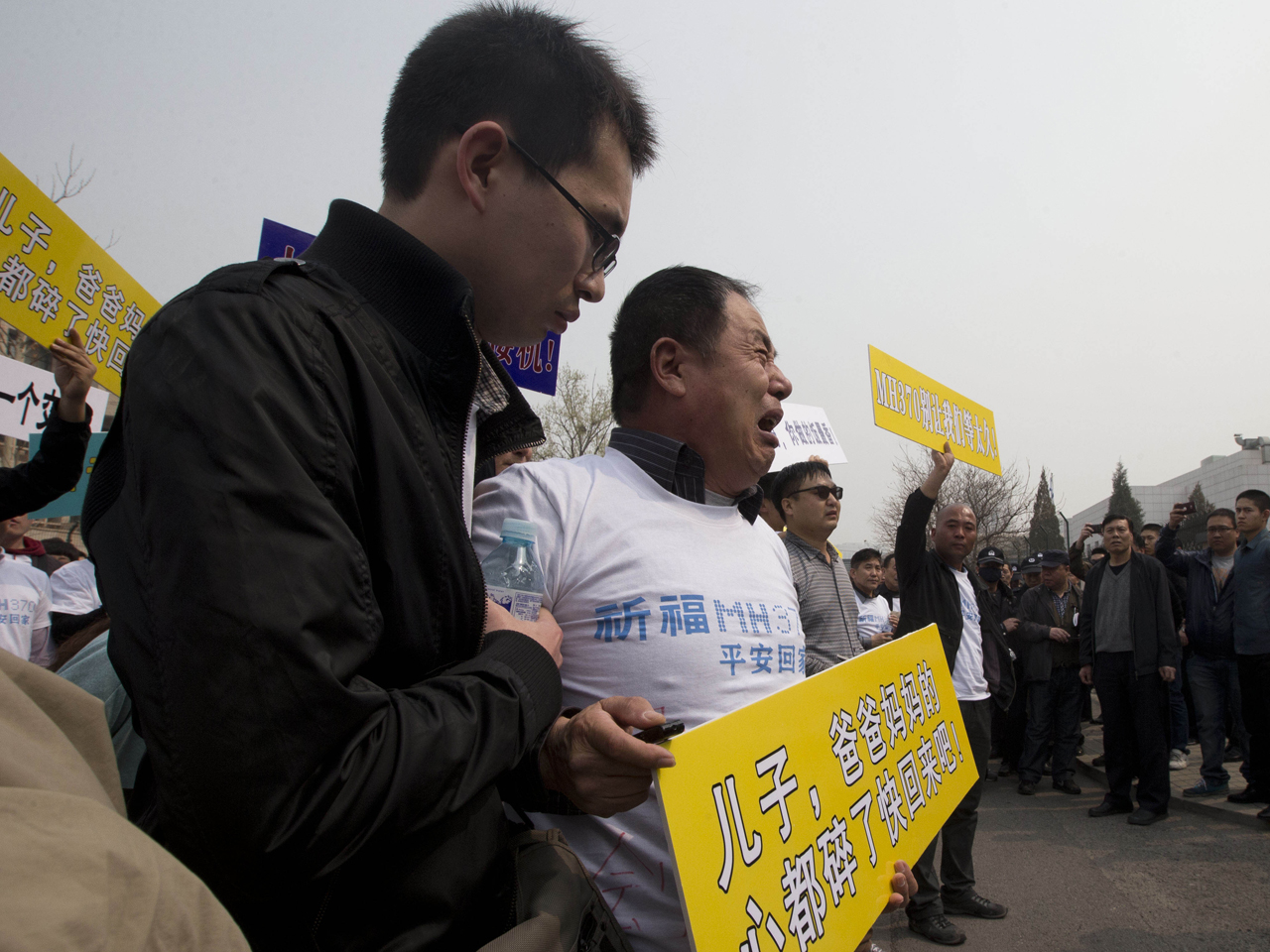 KUALA LUMPUR, Malaysia -- China demanded Tuesday that Malaysia turn over the satellite data used to conclude that a Malaysia Airlines jetliner had crashed in the southern Indian Ocean, killing all 239 on board. Officials sharply narrowed the search area as a result of that assessment, but the zone remains as large as Texas and Oklahoma combined.

Australia said improved weather would allow the hunt for the plane to resume Wednesday after gale-force winds and heavy rain forced a daylong delay. Searchers face a daunting task of combing a vast expanse of choppy seas for suspected remnants of the aircraft sighted earlier.

"We're not searching for a needle in a haystack -- we're still trying to define where the haystack is," Australia's deputy defense chief, Air Marshal Mark Binskin, told reporters in Perth at a military base as idled planes remained parked behind him.

In remarks to the Malaysian Parliament, Prime Minister Najib Razak also cautioned that the search will take a long time and "we will have to face unexpected and extraordinary challenges."

Late Monday, Najib announced that the Boeing 777 had gone down in the sea with no survivors. But that's all that investigators and the Malaysian government have been able to say with certainty about Flight 370's fate since it disappeared on March 8 shortly after taking off from Kuala Lumpur for Beijing. Left unanswered are many troubling questions about why it was so far off-course -- the plane essentially back-tracked its route over Malaysia and then traveled in the opposite direction in the Indian Ocean.

Investigators will be looking at various possibilities including possible mechanical or electrical failure, hijacking, sabotage, terrorism or issues related to the mental health of the pilots or someone else on board.

Monday night's e announcement unleashed a storm of sorrow and anger among the families of the plane's 239 passengers and crew - two-thirds of them Chinese. Family members of the missing passengers have complained bitterly about a lack of reliable information and some say they are not being told the whole truth.

Nearly 100 relatives and their supporters marched on the Malaysian Embassy in Beijing, where they threw plastic water bottles, tried to rush the gate and chanted, "Liars!"

Many wore white T-shirts that read "Let's pray for MH370" as they held banners and shouted, "Tell the truth! Return our relatives!"

There was a heavy police presence at the embassy and there was a brief scuffle between police and a group of relatives who tried to approach journalists.

Deputy Foreign Minister Xie Hangsheng told Malaysia's ambassador to Beijing late Monday that China wanted to know exactly what led Najib to announce that the plane had been lost, a statement on the ministry's website said.

Xu Dengwang, whose wife was a passenger on Flight 370, was reeling from the shock Monday in his room at the Lido hotel in Beijing, where many family members have been waiting for days for news.

"I learned the news from television. I couldn't handle it. I fainted," Xu told CBS News, speaking through a translator. "How can you announce this news to the world without providing evidence?"

Some relatives of Chinese passengers aboard the flight read out an emotional statement Monday, calling for Malaysia Airlines and Malaysia's government to be held accountable, CBS News Shannon Van Sant reported from Beijing.

"Malaysia Airlines, the government of Malaysia... and the military forces of Malaysia have concealed, delayed and hid the truth from the relatives and the peoples of the world," the statement said. "This despicable act aimed to fool the relatives of the 154 Chinese passengers have devastated us physically and mentally, while misleading and delaying the rescue operation, wasting a lot of manpower, material resources and leading to the loss of precious rescue time."

Malaysia Airlines Chairman Mohammed Nor Mohammed Yusof said at a news conference Tuesday that it may take time for further answers to come clear.

He added that even though no wreckage has been found, there was no doubt it had crashed.

"This by the evidence given to us, and by rational deduction, we could only arrive at that conclusion: That is, for Malaysia Airlines to declare that it has lost its plane, and by extension, the people in the plane," he said.

The conclusions were based on a more thorough analysis of the brief signals the plane sent every hour to a satellite belonging to Inmarsat, a British company, even after other communication systems on the jetliner shut down for unknown reasons.

Najib said that an unparalleled study of the jet's last-known signals to a satellite showed that the missing plane veered "to a remote location, far from any possible landing sites" in the southern Indian ocean.

Although there have been an increasing number of apparent leads, there has been no definitive identification of any debris. For several days now, search planes have been scouring seas 1,550 miles southwest of Perth, and have spotted several floating objects, but none have been retrieved or proven to be from the missing plane.

"It is impossible to predict how long this will take. But after 17 days, the announcement made last night and shared with the families is the reality which we must now accept," Ahmad Jauhari, the airline's chief executive, said.

The latest satellite information cannot provide an exact location but just a rough estimate of where the jet crashed into the sea.

Australian Prime Minister Tony Abbott said he had spoken to Najib to offer help with the ongoing search and investigation.

"What up until now has been a search, moves into a recovery and investigation phase," Abbott said. "I have offered Malaysia, as the country legally responsible for this, every assistance and cooperation from Australia."

Several countries had already been moving specialized equipment into the area to prepare for a possible search for the plane and its black boxes, the common name for the cockpit voice and data recorders - needed to help determine what happened to the jetliner.

There is a race against the clock to find any trace of the plane that could lead them to the location of the black boxes, whose battery-powered "pinger" could stop sending signals within two weeks. The batteries are designed to last at least a month and can last longer.

An Australian navy support vessel, the Ocean Shield, equipped with acoustic detection equipment, was expected to arrive in several days in the search zone. And the U.S. Pacific Command said it was sending a black box locator to the region in case a debris field is located.

The U.S. Navy has also sent an unmanned underwater vehicle to Perth that could be used if debris is located, said Rear Adm. John Kirby, a Pentagon spokesman. The Bluefin-21, expected to arrive in Perth on Wednesday, has side-scanning sonar and what is called a "multi-beam echo sounder" that can be used to take a closer look at objects under water, he added. It can operate at a depth of 14,700 feet.

The search for the wreckage and the plane's recorders could take years because the ocean can extend to up to 23,000 feet deep in some parts. It took two years to find the black box from an Air France jet that went down in the Atlantic Ocean on a flight from Rio de Janeiro to Paris in 2009, and searchers knew within days where the crash site was.

"We've got to get lucky," said John Goglia, a former member of the U.S. National Transportation Safety Board. "It's a race to get to the area in time to catch the black box pinger while it's still working."