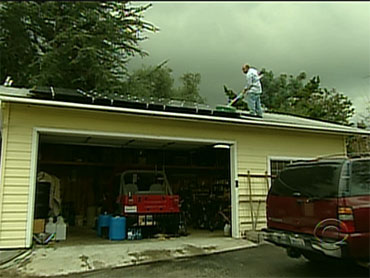 The word "green" is often used as a kind of shorthand for the entire environmental movement. But for some builders and homeowners, "green" can also refer to money - as in, the money they hope certain earth-friendly steps can save them. CBS News correspondent Ben Tracy reports.

Dan Sharp decided it was time to do his part to help save the planet.

"A lot of things we were consuming - ways that we were living - [were things] that we didn't necessarily need to be doing," Sharp said.

For the past five years, he's been systematically turning his century-old yellow house into a green house (without changing the paint color).

Sharp installed solar panels on the roof, added solar tube lighting inside, and replaced the air conditioning system with a giant house fan.

"It's a little louder than a normal air conditioner but it costs much, much less to operate," he said.

Dan's wife, Maya, wasn't so sure about all these eco upgrades - until she saw their annual electric bill.

That type of savings has homeowners jumping on the green bandwagon. A recent survey found that 68 percent of those polled took steps last year to make their homes more energy efficient. Yet 71 percent of them said their No. 1 reason was to save money - not necessarily the environment.

Comstock Homes is building the country's largest solar-powered community just outside Los Angeles. The sun power generated could save homeowners as much as $300 on their monthly utility bills. They think it will also spike home sales.

"By adding the solar to it, it allows us to absorb probably twice as fast the number of buyers that we normally would," said Comstock president Bob Comstock.

Meanwhile, Greenstreet Development - a housing startup in Phoenix - is selling green homes for as low as $115,000. They keep costs down by buying foreclosed properties and renovating them with energy-saving features.

Yet one of the biggest selling points is not the savings inside, it's the savings a couple of blocks away. All of the homes are located within a quarter mile of the city's new light rail line, cutting down on commuting time and cost.

Still, there's a limit on how much consumers will spend to go green.

"When we polled consumers, they're only willing to pay about 2 percent more than the cost of that house would normally be in order to get it green," said Jerry Howard, CEO of the National Association of Homebuilders. "That's a difficult balance for a builder to achieve."

But, "In the long term, you will save money - you will recoup your investment," Sharp said.

And that means Dan Sharp is seeing less of his hard earned money washed away.