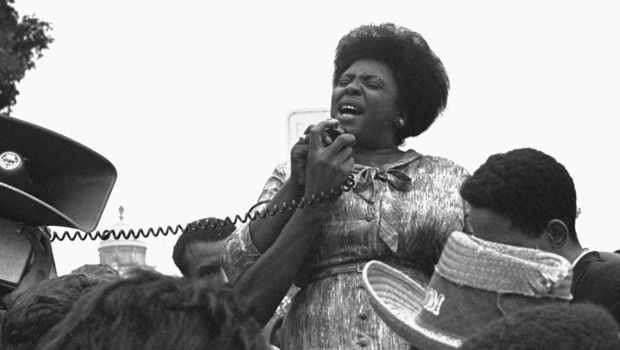 Fannie Lou Hamer is the civil rights worker that influences me because, as a woman and a strategist, it is imperative that I see examples like hers.

As the head of the Student Nonviolent Coordinating Committee (SNCC), she was personally responsible for training many of the civil rights leaders that came up behind her. The way that she did so, in a way that allowed them to have their own agency but also understand the bigger picture so that they could give the best of themselves, is something that I try to incorporate in my work.

Please share an experience in which you realized that the U.S. has/has not achieved equality in race, gender or sexual preference, and its impact on you.

I live and work in one of the country's poorest congressional districts, which also happens to be predominantly Latino and black American. We have high concentrations of unemployment, poor health outcomes, low educational attainment, some of the most under-subsidized housing, and industries that pollute the environment here. We are not on the receiving end of the kind of economic and/or environmental support systems that allow people to move up and out of poverty.

So when I am asked to share an experience that shows that we have not really achieved equality, and in particular in race, I see it not only in the community that I was born and raised in, but also in all the communities around the country that are like the South Bronx. What strikes me is that we have not been able to create the kind of support that allows those kinds of communities to thrive and grow.

I am really dedicated to creating the kind of systems -- starting in real estate development and economic development -- that actually allow people in low-income communities to be full participants as those communities start to quote-unquote change or gentrify; that allows wealth to increase and grow; that allows people to be able to develop into the kind of advocates for their own well-being the way that they can be, but only if they're not poverty-stricken.

So for us the development of tools and economic development that would allow people to move up the economic ladder is precisely the kind of thing that we want to see happen more.