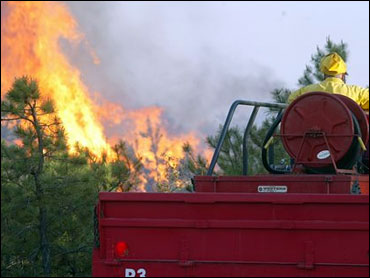 Firefighters made progress Sunday on a 2,500-acre wildfire that chased thousands of people from campsites near Los Padres and Angeles national forests.

"There are a few hot spots, but things are looking pretty good," Brown said.

The 200 firefighters on the lines were helped by lower nighttime temperatures.

More than 3,000 people were evacuated from four campsites in the area between the national forests, Brown said. Authorities said no homes were immediately threatened.

The fire was reported at about 2 p.m. Saturday near the Golden State Freeway about 70 miles north of Los Angeles. The cause of the blaze was under investigation.

Elsewhere, a wildfire that had threatened homes and other structures in two northern Arizona forests was 80 percent contained. Twenty-one evacuees were allowed home Sunday.

The residents had been evacuated Wednesday after erratic winds from two thunderstorms pushed the Promontory fire within a mile of their homes. The fire was burning 18 miles east of Payson.

But fire crews were able to build a line surrounding the fire and hold it over the weekend, said fire spokeswoman Lori Cook. It was 90 percent contained by Sunday night, with full containment expected by Tuesday.

"We feel as though it's going to stay within the perimeter of the fire, so there's not a threat to the homes," Cook said.

Rain also helped firefighters fight a blaze that burned 27 square miles of forest in the dry southern New Jersey Pinelands. At the height of the fire, 6,000 people — many of them seniors — were evacuated and a handful of homes were damaged or destroyed.

However, two heavy rainstorms during a three-day period late in the week helped firefighters contain 90 percent of the blaze by Friday night. And police in Barnegat Township — one of the communities that was hardest-hit by the fire — said it had been declared under control as of late Sunday night.

The cause of the fire remained under investigation Sunday. However, the New Jersey Air National Guard has said one of its F-16s dropped a flare into the tinder-dry Pinelands during a training mission Tuesday afternoon, possibly starting the blaze.

On Friday, the Air Force announced that it has convened an accident investigation board to review how the blaze got started on the 9,400-acre expanse of sand and scrub pine used for bombing practice by military aircraft.

All training at Warren Grove has been suspended until the investigation is complete, officials said. And the military has promised to reimburse those who lost homes or property in the fire if federal investigations pinpoint the jet as the cause of the blaze.