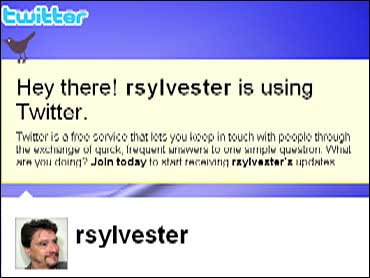 U.S. District Judge Thomas J. Marten gets it. He's the judge who allowed a reporter to Twitter court proceedings in a trial of six Crips gang defendants taking place in his Wichita, Kan courtroom.

Marten told the Associated Press, "The more we can do to open the process to the public, the greater the public understanding," and, when asked about lawyers' concerns that jurors might be influenced by the "tweets," he said jurors are always told to avoid broadcasts, newspaper and online reports.

The tweets are from Ron Sylvester, a reporter from the Wichita Eagle who had previously used Twitter in state courts, but the use of a computer to live blog a federal case is extremely rare. You can follow his tweets here. During Friday's session, he updated about every two minutes - sometimes more often.

Federal court procedures, according to CBS News chief legal analyst Andrew Cohen, generally prohibit cameras, microphones or computers in the courtroom. In an interview with KCBS radio in San Francisco, Cohen said that there is a move to change that, but "it's not part of the federal rules of procedure."

Cohen said there is an effort in Congress to create a rule that would give federal judges the green light to allow cameras if they want to. "It's a matter of convincing the federal courts, which are notoriously slow to move forward on these sorts of things, to finally make the move."

Cohen thinks Federal courts are likely to be less reluctant to allow Twittering and blogging than to permit cameras or microphones. "There is a difference between broadcasting the audio or video of the witnesses testifying and allowing for reporters' perception of that," he said. "The difference between a reporter doing that in the courtroom and a reporter doing it during the breaks and phoning it in is not that great."

I'm no legal expert, but I agree with Cohen. Trials in America are the public's business and, with rare exceptions, what is said in a trial is a matter of public record. Requiring reporters to rely on hand-written notes or their memory and filing reports during breaks does nothing to add to our understanding of what is happening in the courtroom.

Although I'd also like to see live steaming of most trials, I can understand why some lawyers and judges are reluctant to have witnesses testify in front of cameras but I see no reason why they can't be blogged, Twittered or simply covered by journalists using computers and other modern tools of our trade.
By Larry Magid