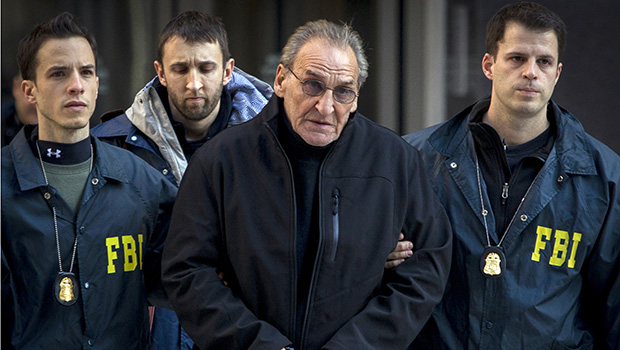 NEW YORK - For decades, prosecutors say, Vincent Asaro managed to keep his role in an infamous mob heist immortalized in the hit movie "Goodfellas" hidden from the outside world while others of his generation were locked up or died gangland deaths.

A frail-looking Asaro finally emerged from the shadows after his arrest last year and will go on trial Monday on charges he pocketed a cut of the $6 million Lufthansa robbery at Kennedy Airport in 1978 - one of the largest cash thefts in American history.

If convicted, he'd become the latest casualty of an erosion of the Mafia's code of silence that has decimated the aging upper echelon of New York City's underworld, sometimes called the "Oldfellas."

Prosecutors at the trial in federal court in Brooklyn will give jurors a lesson in a bygone era when the five Italian Mafia families had a greater appetite for brazen crimes - and deadly payback for betrayals. The defense will counter by accusing the government of using shady turncoat gangsters with faded memories or incentives to lie.

Asaro, 80, who has a history of convictions for lesser mob-related crimes, was arrested again after his cousin, Gaspare Valenti, came forward with new information about the heist and agreed to wear a wire to try to coax admissions out of the reputed longtime member of the Bonanno crime family. Prosecutors haven't revealed why their key witnesses turned on Asaro, though it's believed he may have held a grudge after being cheated out of a cut of Asaro's $750,000 take from the heist, said Jerry Capeci, a Mafia expert who writes the ganglandnews.com web column.

Valenti, a Bonanno associate who has pleaded guilty to racketeering conspiracy, is expected to take the witness stand to testify about Asaro's alleged role in the Lufthansa heist and a gruesome murder of a suspected mob turncoat. Other witnesses will include former Bonanno boss Joseph Massino, the highest-ranking mobster to ever break the mob's oath of omerta by becoming a government witness.

Asaro was a Bonanno soldier, with the Mafia slogan "death before dishonor" tattooed on his forearm, in late 1978 when hooded gunmen looted a vault in the Lufthansa's cargo terminal and stole about $5 million in untraceable U.S. currency that was being returned to the United States from Germany, along with about $1 million in jewelry.

The theft was orchestrated by James "Jimmy the Gent" Burke - a late Lucchese crime family associate portrayed by Robert De Niro in "Goodfellas" - with the blessing of Asaro, whose crime family considered the airport its turf, court papers said. Afterward, higher ranking conspirators were expected to receive $750,000, "but most did not live to receive their share, either because they were killed or it was never given to them," the papers said.

In one of the recordings made by the cooperating cousin, Asaro complained in a profanity-laced rant, "We never got our right money, what we were supposed to get. ... Jimmy kept everything."

But prosecutors claim Asaro indeed got his money, and blew most of it at the racetrack because of a gambling problem, prosecutors said. As evidence of that, another cooperator "is expected to testify that, following the Heist, he saw the defendant regularly at a local track betting larger amounts than usual and extending extortionate loans," the government said in court papers. Asaro gave Massino, his boss in a Bonanno crew, an attache case filled with gold and jewelry from the heist as a tribute, the papers said.

The windfall set the stage for a bloodbath portrayed in "Goodfellas." De Niro's character became irate over fellow mobsters' purchases of flashy cars and furs, fearing they would attract law enforcement attention, and had some of them whacked - a plot twist based on the inside account of Henry Hill, the mob associate-turned informant played in the film by Ray Liotta.

In addition to the real-life heist, Asaro is charged in the 1969 murder of a suspected law enforcement informant, Paul Katz, whose remains were found during an FBI dig in 2013 at a house once occupied by Burke. Asaro told the cooperator that Burke "had killed Katz with a dog chain because they believed he was a 'rat,'" the court papers said.

Valenti, 68, also told investigators that Asaro and Burke brought Katz's body to a vacant home in Queens where it was concealed beneath a cement floor, the paper said. In the 1980s, at the behest of the imprisoned Burke, Asaro ordered the cooperator to dig up the remains - "a human skull, bones and some corduroy clothing material" - and move them to another location, the papers said.

In the years since the heist and the murder, the Martin Scorsese blockbuster was made, books were written and some of the robbers were convicted or rubbed out. Asaro quietly went about his business and, for a time, got away with it, though his criminal career and personal life were rocky, authorities said.

In the 1990s, the then-captain in the Bonanno family was demoted to soldier because of "his gambling problems and failure to repay debts to those associated with organized crime," court papers said. Prosecutors say at one point, he found himself a subordinate of his mobster son, who rose through the ranks with his help - a favor his father regretted.

By 2013, "after a series of high-profile Bonanno family members cooperated with law enforcement or were incarcerated," the defendant had been promoted again to captain and won a position on the "panel" or administration running the Bonanno family, court papers said. But by then, the cooperator had come forward to crack open the Lufthansa time capsule and the feds were closing in.

"Sometimes mob secrets never get told," Capeci said. "And sometimes they get told a lifetime later."