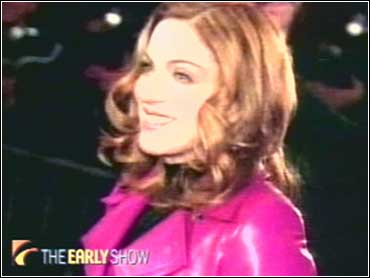 The American singer, whose famous hits include Like a Virgin and Material Girl, filed the complaint in July at the Geneva-based World Intellectual Property Organization against businessman Dan Parisi, who was first to register the Internet address.

A three-member panel at WIPO, the United Nations copyright and intellectual property agency which runs an arbitration system that evicts cybersquatters, ordered Parisi to transfer the site to Madonna.
The panel said Parisi, who is a Web site developer, had no trademark right to the name Madonna and failed to prove legitimate interest in the Internet domain name, which he had registered in bad faith.

Parisi had paid Pro Domains $20,000 for the disputed domain name in May 1998, then registered Madonna as a trademark in Tunisia, the panel found. The site featured sexually explicit photographs and text.

Cybersquatters are people who register famous names as domains in the hope of making a quick profit.

Madonna argued that the site, which initially carried pornography that was later removed, tarnished her name. WIPO noted that the singer had used her name and trademark Madonna professionally since 1979.

WIPO said this was not the first cybersquatting case involving Parisi, who had registered domain names including "wallstreetjournal.com."

As domain names have become more valuable with the meteoric rise of the Internet, a market has emerged for opportunists to grab addresses in the current system -- which is largely first come, first serve.

WIPO's fast-track arbitration system allows firms and individuals to avoid costly lawsuits in cases when mischief is obviously involved or large amounts of money are at stake.

WIPO has received more than 1,000 cases related to disputed domain names since its arbitration system began last year. Decisions were made in more than half of the cases, some 80 percent of which went in favor of the complainants.

A number of celebrities have already won back their names through the process, including actresses Julia Roberts, Isabelle Adjani and comedienne Rita Rudner.

Others have been less successful. The singer Sting was denied transfer of the name "sting.com" on the grounds that it was not his real name and was a common English word.