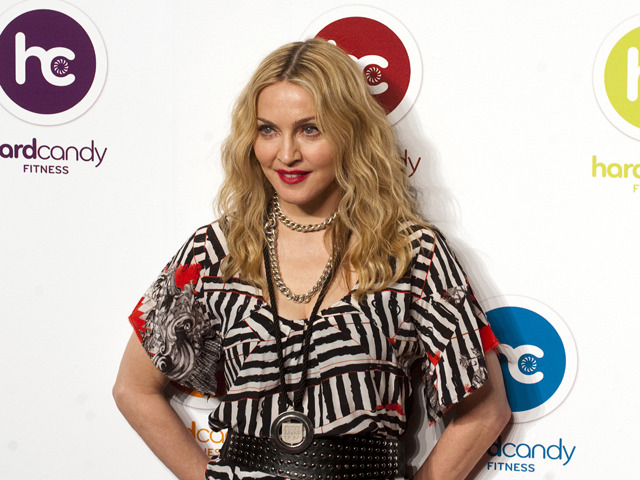 MEXICO CITY (CBS) Shrugging off threat of general Mexico violence, Madonna flew into Mexico City Monday and embraced a throng of fans and fitness fanatics at the opening of her new Hard Candy Fitness gym.

"No Sweat, No Candy," read one of the slogans in the luxurious three-story, 32,000-square-foot gym, which also featured a whole wall of Andy Warhol-style pictures of the singer, in the uspcale Lomas Altas neighborhood of Mexico City.

The singer was greeted by Marcelo Ebrard, mayor of Mexico City, with his actress wife, Mariagna Pratts, and other Mexico City luminaries and investors.

Minutes before meeting Madonna, I was standing behind the mayor, who was busy updating his Twitter account via his BlackBerry. "On behalf of us all, I thank Madonna for her presence and for having chosen us as the first city with one of her gyms," the m

Despite the country's raging drug war, the 52-year-old mother of four said she picked Mexico City because of her love for the country.

"I've come to Mexico for years to do research, I love Mexican culture, architecture, food, music and art," she said to Mexican newspaper Milenio.

Security was intense surrounding the opening. Police helicopters hovered above the gym and a whole street was cordoned off an hour before Madonna made her appearance.

"A lot of places I go to are considered dangerous whether that's Tel Aviv or Rio, that never stops me from going somewhere to put on a show. I'm not hindered by that. I have good security and I'm not worried about it," Madonna said as she walked down the red carpet.

A crowd of nearly 700 new members awaited the singer inside. New eliptical training machines jostled for space amid the impromptu Grey Goose vodka stands. At the start of the night, most members were drinking Gatorade.

Oscar Salazar, one of the gym trainers who was handpicked by Madonna to dance along in a specially choreographed dance class by her following the opening of the gym, said he wished Madonna would influence more Mexicans to get fit.

"We have a growing obesity problem in Mexico," Salazar said as he showed new members around the gym. "You should've seen some of the police officers who came to check out the location before Madonna arrived - they could hardly fit into their uniforms!"

Amid the well-groomed and hyper rich sophisticated Mexico set, I found Benjamin Cardozo, a 29 year old singer and dancer who told me, "I've joined the gym just so I could attend this party, I can't really afford it, but I had to see Madonna in the flesh."