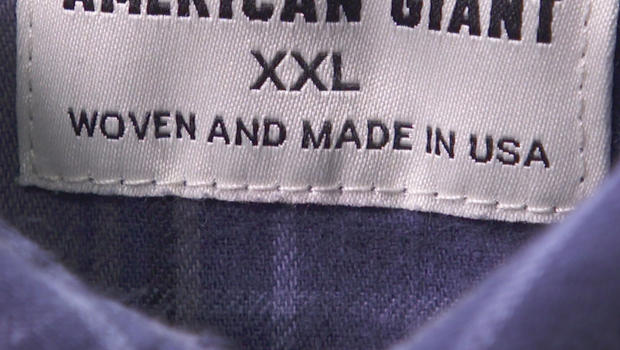 In 1980 almost 80% of clothing bought in the U.S. was made in America. Today, it's around 3%. Winthrop says while globalization and trade deals made goods cheaper, they also brought decades of lay-offs and plant closures.

"I'm a free-trade person," Winthrop said. "But I also am a believer in saying, 'Wait a second, you cannot gut a bunch of communities in the U.S. and move to Bangladesh and then import all those goods back again and sell them at the local Dollar Store to all these people that now no longer have jobs.'"

Winthrop's previous experience had been on Wall Street and in Silicon Valley, but he started his own clothing company with a big name – American Giant – and an even bigger goal: making everything, from start to finish, in the United States.

Like a few other clothing companies trying to manufacture in the U.S., American Giant faced a big challenge: all those closed factories have left a threadbare infrastructure for actually making apparel, like the company's flannel shirt.

"So, this was an art that had almost died in America?" asked correspondent John Blackstone.

"Well, it had effectively died," Winthrop said. "We actually had to bring one of the great yarn dyers effectively out of retirement to come back and help deliver this program."

Creating work meant creating a supply chain, involving multiple steps. Blackstone followed the chain for American Giant's hoodie, and learned the jobs are not what they used to be.

The seeds of Winthrop's big idea are found on farms like Jerry Hamill's in Enfield, North Carolina, where cotton is planted in the spring. Hamill is looking for help, but says few are up to the job.

"The labor force here, the ones that will work are working," he said. "And some are not gonna work. It makes no difference what they are offered, what kind of money, what kind of benefits. They just are not going to work."

So, each season Hamill hires men from Mexico on temporary worker visas. Come fall they'll pick the cotton and transfer it to the local gin, which removes the seeds.

The next stop is Parkdale Mills in Gaffney, South Carolina, where raw cotton is cleaned and spun into yarn. Parkdale Mills has more in common with Silicon Valley than it does with the mill seen in the 1979 movie "Norma Rae."

Blackstone said, "I come into your mill, I expect to see Sally Field, and I see robots instead."

"To stay in business today, you have to automate," said Parkdale CEO Andy Warlick. "And we couldn't survive competing against the world if we weren't automated. Probably have more robots here than we have employees. But the employees are well-trained to operate those robots. And it's been the key to our survival."

In the 1960s a mill like this would have employed 2,000 workers; today, about 125 work here producing about 2 million pounds of yarn a week.

It's then knitted into fabric and sent a few miles away to Carolina Cotton Works, where it's dyed and dried.

Founder Page Ashby and sons Hunter and Bryan started working with Winthrop in 2013 after realizing he wasn't the typical client.

"It contradicted the conventional thinking of taking cost out and offering something cheaper than everybody else," said Bryan. "And on top of everything else, he's going to make it a couple hundred miles from here in North Carolina. My response was, 'This is the guy we've been dreaming about. Where's he been for the past 15 years?'"

For the final stop, the finished fabric goes to the knitwear plant Winthrop helped buy, Eagle Sportswear, where it's cut and sewn into actual clothing.

Winthrop said, "The sweatshirt is so complicated, there are so many parts, that each modular line is only making a part of the sweatshirt."

To improve productivity, Winthrop replaced the traditional assembly lines with groups of sewers working in teams. They get extra pay for exceeding daily quotas.

Thelma Agular, who has worked here for 21 years, is part of a three-woman modular sew line, who are exceeding their expected output of units by 123%.

"Yeah, they changed everything," Agular said of the process. "And you can make more money."

"So, you try to be very efficient all day?" asked Blackstone.

"Yeah. So, I'm holding you up from meeting your goal there?"

Blackstone asked Winthrop, "You have to pay these people a good deal more than you would if they were sewing in China or Vietnam."

"Yeah. I would just argue that's a good thing, right?" he replied.

Keeping this final step here in the U.S., Winthrop says, adds as much as $17 to the total cost of the hoodie. To reduce overhead, American Giant sells almost entirely online, with only two brick-and-mortar stores.

So, the final price tag for the hoodie Blackstone followed from the cotton fields to the gin to the mill to the dyer to the knitwear plant to the store, is no bargain: $108.

Winthrop justified the expense: "What we really want to do with this particular item is make something that you are going to have for decades."

In this era of fast fashion, Winthrop may seem out of step. But despite its lofty price tag, his hoodie has been selling well ever since the digital magazine Slate called it "the greatest hoodie ever made."

"The article came out, and within 24 hours, we'd sold everything we'd ever made," he said.

Bayard Winthrop wants to inspire other companies to manufacture here. For him the "Made in U.S.A." label creates both jobs and pride.

Blackstone asked, "So, are you selling an idea, an image, as much as clothing?"

"I think we're selling a value system," Winthrop said. "Stand for some things that matter, stand for American manufacturing, stand for the people that are making stuff. And when we buy things, when we do it consciously, when we do it with an eye towards understanding how these little votes that we make have an impact attached to them, we'll be better off."