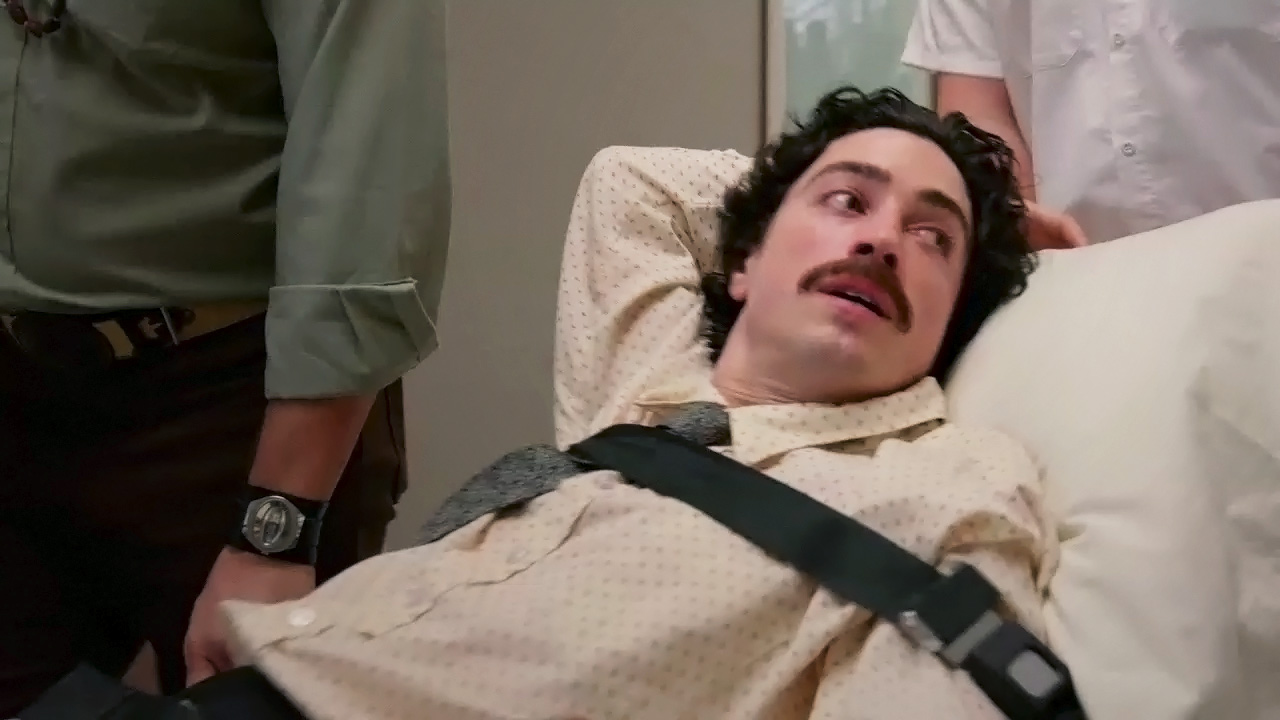 Sunday night's episode of "Mad Men" was filled with plenty of surprises both inside and outside the office of Sterling Cooper & Partners. But for many viewers, none quite compared to the shock Peggy Olson received when she opened a gift box from her increasingly erratic colleague, Michael Ginsberg. Inside she found his severed bloody nipple, which the disheveled and talented copywriter had cut off and presented to his boss as a sort of peace offering.

At that moment it becomes astutely clear that Ginsberg has a devastating mental illness. In retrospect, the clues to his unraveling had been accumulating for some time.

Ginsberg's delusions center around the new computer in the office, a loudly humming room-size machine which has displaced him and his creative team and sent them to a tiny claustrophobic work office. He tells Olson the computer's noise is too distracting for him to work and that the "machine makes men do unnatural things" by turning them all into homosexuals. He tells Olson his nipple is the computer's valve and he's removed it to relieve the pressure.

Ginsberg's psychosis reflects a phenomenon detailed last year in an article that appeared in "The New Yorker."

"Shifts in technology have caused the content of delusions to change over the years: in the nineteen-forties, the Japanese controlled American minds with radio waves; in the fifties, the Soviets accomplished this with satellites; in the seventies, the CIA implanted computer chips into people's brains," explained Andrew Marantz in his story.

In Marantz's reporting he found that today's common delusions frequently recreate the concept of the "Truman Show," in which the person believes they are a star of their own reality television show and cannot escape the scrutiny of cameras and an international around-the-clock broadcast of their life.

In Ginsberg's mind, the fear that computers will change, replace and control humans -- worrisome to many at the time -- is the centerpiece of his psychosis.

Actor Ben Feldman, who plays Ginsberg, says he was stunned when he first learned of the plot line. "(Mad Men's creator) Matt Weiner and I sat down a few weeks before that episode and he told me everything that was gonna happen and my jaw just dropped to the floor," the actor laughed.

A few seasons ago, when a more stable-seeming Ginsberg first entered the fray, he confessed to Olson that he was a child of the Holocaust, born in a concentration camp during World War II. Now in hindsight, this may also explain much about his current state of health. "That machine came for us," he tells Olson.

Many refugees of the war were plagued by debilitating post-traumatic stress disorder and other forms of mental illness, compounded by the lack of social services provided to survivors who often experienced high levels of paranoia, anxiety and fear of future persecution.

At the end of this week's episode, Ginsberg is wheeled out of the office on a gurney. It's unclear what will become of him. However, it's worth noting the historical context, since the realities for the characters closely reflect the social and political climate in which they live. Ginsberg may be in for an uphill battle, and his copy writing days very well could be over.

It's currently the year 1969 on "Mad Men." The late 1960s marked a turning point for the rights of mentally-ill people, an extension of the volatile Civil Rights Movement. In 1967, lawmakers in the state of California passed the Lanterman-Petris-Short Act, essentially the first stab at a bill of rights for the mentally ill, which attempted to enforce some protection within the legal system and communities in the state, both for the patient and society as a whole. The legislation, signed by then-governor and future president Ronald Reagan, would later inform mental health policy in other states and on a federal level. But not for a while.

Serious mental illness was still frequently dealt with by institutionalization, although by the mid-1960s the number of people in psychiatric hospitals had started to decline from a peak in the 1950s.

This is not the first time "Mad Men" has addressed the taboo topic of mental illness. In earlier seasons, Don Draper's ex-wife Betty sought help for her clinical depression and weight gain through psychotherapy and pills -- a reference to the plight of suburban moms in 60s and 70s. It was not uncommon for "happy homemakers" of those eras to try to quell their depression with a few pills, or as the Rolling Stones song called them, "Mother's Little Helper."