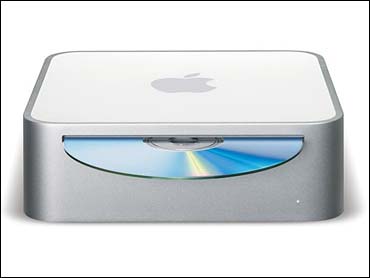 Hearing the hype about Apple's new $499 Macintosh gave me pause. Could Apple, which is known as the BMW of computer companies, really come out with a machine cheap enough to tempt Windows users yet still "Mac" enough to satisfy Macintosh aficionados? After unpacking and setting up the new machine, the answer is a qualified yes.

Before I get into the evaluation, here are the basics. Aside from being the cheapest Mac, the Mac Mini is also the smallest. In fact, it's the smallest full featured desktop powered PC from any major computer maker. It measures only 2 inches by 6½ inches square though it comes with an external power adapter that's just as long and more than a third as wide as the computer itself. I could easily see someone taking this machine back and forth between home and work.

The standard issue $499 unit comes with 256 megabytes of memory, a 40 gigabyte hard disk, a "combo" drive that reads DVDs and both reads and writes CDs and a 1.25 gigahertz PowerPC G4 processor. The G4 is not as fast as the G5 processor that's included in Apple's other desktop machines, including the $1,299 iMac, but it's fast enough to run just about any application most consumers would want to use.

The new Mac doesn't come with a keyboard, mouse or monitor. When Steve Jobs introduced it at MacWorld Expo on January 11th, he joked "We call it BYO DKM ... Bring your own display, keyboard and mouse."

It does have two USB (2.0) ports, a FireWire port for digital video cameras or other high-speed external devices, a port for a VGA or digital video (DVI) monitor, a phone/modem port and an Ethernet port for a wired local area network. I used both USB ports to connect the keyboard and the mouse. I later plugged in a USB 2.0 hub (about $20) so I could connect my digital camera, iPod and external hard drive.

In keeping with Jobs' BYODKM suggestion, I cannibalized some of my old Windows PCs to come up with a Gateway monitor, a Dell mouse and a Compaq keyboard, all of which worked perfectly with the new Mac. That's no accident. Apple hopes to win over frustrated Windows users who already have these peripherals connected to an old PC. If you had to go out and buy all of these items you'd wind up paying about $30 for a keyboard and mouse and another $150 to $400 for a monitor, depending on whether you opt for an LCD flat panel display (starting at about $250) or an inexpensive CRT (TV-like) screen.

Speaking of extra expenses, $499 gets you a bare bones machine. It's usable — once you plug in the required peripherals — so there's no bait and switch here. However, most users will be better off spending an extra $75 for a unit with 512 megabytes of memory and, while you're at it, you really ought to consider getting the $599 version that has a roomier 80 gigabyte hard drive and a slightly faster processor. By the time you equip that with 512 MB of memory, you're up to $674. If you want the Apple keyboard and mouse, add another $58. The SuperDrive (that also writes DVDs) adds another $100 so — for many buyers — this "$499" Mac will wind up costing $832 plus another $300 or so for a flat panel monitor. In other words, by the time you're out the door, you could easily wind up spending more than $1,100. For a couple of hundred more you could buy an Apple iMac with the faster G5 processor and a built-in 17 inch flat panel display.

Still, you can get away with spending a lot less, especially if you already have your own keyboard, monitor and mouse, but it's far from the cheapest computer on the market. Dell offers a $349 system that comes complete with a 17 inch CRT monitor, 512 MB of RAM and a 40 GB hard disk.

So how did the Mac stack up? Apple sent me the basic $499 system except it was upgraded to 512 megabytes of memory, which turned out to be more than enough for every thing I threw at it, including Adobe PhotoShop — a professional photo editing program that's far more demanding than Apple's iPhoto and other personal photo editing programs. Microsoft Office (which includes Word, Excel and PowerPoint) ran just fine, as I expected. To my pleasant surprise so did PhotoShop. Patrick Cashmore, a Palo Alto photographer and designer, a "power user" who owns the latest Apple gear, was "impressed with the speed of applying complex PhotoShop filters to an image."

Of course, most consumers wouldn't use PhotoShop but would opt for iPhoto, Apple's excellent personal editing and photo organizing program that comes free with the new Mac. The Mac Mini also comes with the rest of Apple's highly regarded iLife programs that also include the latest versions of iTunes, iMovie, iDVD and GarageBand.

In keeping with the theme of encouraging Windows users to switch, I configured the Mac Mini to access files on my Windows network and copied over hundreds of digital photos, Excel spreadsheets, Microsoft Word documents and music files. The Word files worked fine with the version of Mac Word while iPhoto did a fine job handling my PC's pictures. iTunes, as advertised, works on the Mac, just as it does on the PC.

While the Mac Mini won't suddenly make Macs a more popular platform than Windows, I think it may tempt many Windows users who are curious about the Mac and/or frustrated with Windows which is far more prone to spyware, viruses and security problems. Some Windows users might wind up liking the Mini so much that they wind up becoming life-long Mac users while others may use it as their second computer — perhaps to surf the web, check email and edit digital photos.

Now my home office — with its Widows machine and Mac Mini — is a little like my friend Peter's garage that houses a Mercedes and a Ford. I'll leave it up to you to decide which computer most resembles which vehicle.