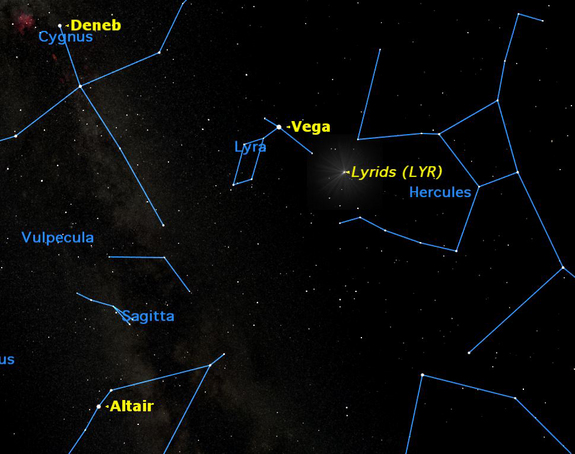 (SPACE.com) The week ahead promises to be a perfect time to observe meteors. That's great news since the Lyrid meteor shower peaks on Sunday (April 22), but any night this week should be a good night to see meteors.

Meteors are visible every night of the year, but some nights are better than others. The best nights are those with no moon in the sky during one of the many meteor showers that take place during the year.

A meteor occurs when a tiny fragment of interplanetary material, known as a meteoroid, enters the Earth's atmosphere and is heated to incandescence. This usually occurs at an altitude between 47 and 62 miles (75 and 100 kilometers). Most meteoroids are vaporized in the process; only the largest survive to reach the surface of the Earth, where they are called meteorites.

A meteor shower occurs when the Earth passes through a swarm of meteoroids. These are usually debris from a comet, spread out along the orbit of that comet. The Lyrid meteor sky map associated with this guide shows where to look to see the celestial display.

From our location on the surface of the Earth, when we look in the direction of that orbit, we see the meteors in that shower as streaks of light appearing to radiate from the line of that orbit. That point in the sky is called the radiant of that shower, and usually the shower is named for the constellation in which the radiant is located.

The Lyrid meteor shower consists of remnants of Comet C/1861 G1 (Thatcher). The orbit of this comet appears to lie in the constellation Lyra, close to the border of Hercules; hence these meteors are called the Lyrids.

It helps to think of the comet orbit as a railroad track. If you're standing close to a railroad track, a train coming towards you will have little apparent movement. A train passing on the track right in front of you will seem to move very quickly.

On a typical night, you might see half a dozen meteors in an hour of watching, or one meteor every 10 or 15 minutes. On a shower night you might see double that number, still not very many.

You can increase the number of meteors you might see by watching after local midnight. That's because the Earth is heading into the meteor stream after midnight, so that the meteors are more frequent and faster.

But don't expect to see the sky full of meteors--meteor storms like that are a once in a lifetime experience.

To maximize your Lyrid experience, dress warmly, make yourself comfortable on a deck chair or chaise langue. Take the time to let your eyes to adapt to the dark, then just relax and take in the sky. You don't need any optical aid, because that would limit your field of view. Meteors move too fast for you to aim binoculars or a telescope.  Don't worry about looking at the radiant, because the fastest brightest meteors will be away from the radiant. The only reason for knowing the radiant is so you can tell which meteors belong to the shower and which do not, what we call sporadic meteors.

Don't worry about observing at the right time. Although a meteor shower peaks at a certain hour, there are still plenty of meteors earlier and later, often by days. But do try to observe after local midnight, because that will guarantee a better mentor count.

Remember: Most areas are now on Daylight Saving Time, so local midnight is actually 1 a.m. DST.

Towards dawn, you will probably see some artificial satellites, perhaps even the International Space Station. These are easily distinguished from meteors by their slow staedy movement, taking a few minutes to cross the sky. Meteors, on the other hand, move very quickly and are gone before you can even say "Oh!"

If you snap an amazing photo of the Lyrid meteor shower or other skywatching target and you'd like to share it for a possible story or image gallery, please contact managing editor Tariq Malik at tmalik@space.com.

This story was corrected to reflect the altitude at which meteors typically occur.

This article was provided to SPACE.com by Starry Night Education, the leader in space science curriculum solutions. Follow Starry Night on Twitter @StarryNightEdu.