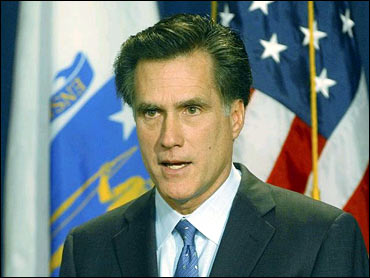 Massachusetts Governor Mitt Romney may be just another white male on the national stage, but he's one step ahead of John Roberts already.

In a speech at a Manhattan Institute-sponsored lunch at the Harvard Club in New York City on Monday that sounded like a toned-down 2008 stump speech, Romney smartly noted that he had been instrumental in fighting for women's bobsledding in the Salt Lake City Winter Olympics (which he organized). That information -- combined with his refusing to roll into his speech without introducing his wife and daughter-in-law -- makes clear that Romney knows the way it is. He doesn't need to get the scoop from John "Neanderthal" Roberts.

Introduced as a "compassionate conservative" by former Indianapolis mayor Stephen Goldsmith, Romney presented himself today as a practical problem-solver who got a deficit-ridden commonwealth to show a surplus -- without raising taxes, cutting education, or cutting funds for the homeless. What Romney did instead was slash inefficiency in government.

In broad strokes, Romney then addressed the war on terror -- saying that "I do not believe that we should cut and run" in Iraq. He talked about the need to focus more resources on preventative homeland-security and intelligence reform. The governor -- also a businessman who at one point was part of a Domino's Pizza company purchase from its founder Tom Monaghan -- also talked about the economic war with China.

He hit on old standbys -- the tax structure is "burdensome," the tort system is "confiscatory." He emphasized personal responsibility, pointing out the difference between Massachusetts' helping someone who has been "knocked down" in Louisiana get back up vs. handouts to residents of his own state. In the latter case, he said, a "we'll take care of you [for] the rest of your life" mentality on the part of government is "deadening to [recipients], their children, and society."

And speaking of children and society: His "family" talk was there but light, his battles over marriage and culture-of-life issues understated on this lunch menu -- likely because he knew his audience. Rudy zone.

There was, of course, the question of the moment: Romney, when asked, emphasized that he's "not a candidate for anything but governor," though clearly not indicating that he was actually running for reelection for governor of Massachusetts. He gave away nothing: "Time will tell what the future holds."

The governor managed to get in the names of other possible 2008 contenders Jeb Bush and Rudy Giuliani during the course of his speech. He mentioned Governor Bush only in a reference to Tim Russert debates -- a reminder that Romney, too, has been in that hot seat? And Romney mentioned Rudy in the course of pointing out that he himself -- like Rudy as mayor of New York, -- aimed for accountability in government. When he became governor, Romney said, he asked: "Where are the monthly reports?" So Romney instituted regular "benchmark" reports: the kind of thing lifelong bureaucrats rarely think of but problem-solving businessmen do.

Without naming names, Romney criticized the response to Hurricane Katrina. While not exonerating anyone, he noted the "apparent absence of someone who was calling the shots" at the local level. "The governor of a state is responsible for homeland security and emergency response" in that state, Romney said: When the state can't meet the need, you get help from your neighboring state or the federal government. What's needed most, though, is "leadership."

The Massachusetts governor wrapped up his non-stump stump speech by declaring that he is "very optimistic about this land and its future." So what was the point of the Big Apple lunch? Well, if the affluent, seasoned man-about-town sitting next to me who didn't know who Romney was is any indication, just getting himself in front of this crowd. Name recognition is what this pol with charm and experience needs.

And, not that this is rocket science (but when is politics, really?): Speaking at a Manhattan Institute luncheon as part of a day in the capital of the world (capped off with an off-the-record evening session with a gathering of the NYC chapter of the Vast Right Wing Conspiracy) gains you nothing if you're running for governor of Massachusetts -- except grief for spending time out of state. But it's a start if you're thinking about running for president.