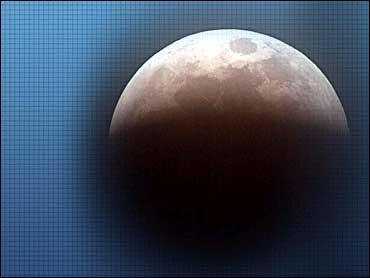 Stargazers across North and South America, Europe and Africa will watch the full moon dim into a dark, ruddy orb over the weekend as the moon drifts through Earth's shadow in the latest celestial event this year to pull eyes skyward.

Astronomers who scrutinized Mars this summer during its closest approach to Earth in 60,000 years were more recently awed by red and green aurora displays as far south as Florida thanks to big explosions on the sun.

And now more heavenly happenings are on the way.

Saturday's lunar eclipse will be followed by the Leonid meteor shower, a total solar eclipse over the southern hemisphere — and a chance for more auroras if the sun stays active. Another eruption Tuesday on the sun may rank among the most intense solar events ever recorded. But the explosion was aimed away from Earth, meaning it would have little impact here.

Still, the otherworldly event the public has the best chance of seeing is Saturday's total eclipse of the moon. At its peak, the moon will hang eerily in the night sky like a dark, reddish-orange coal.

Unlike unpredictable comets and meteors, the moon is a reliable show, said Stephen Maran, a spokesman for the American Astronomical Society.

"Nowadays people who've grown up in the city or suburbs have never seen the Milky Way, but even in the most light-polluted place I've ever been — downtown Los Angeles — you can see the moon," he said.

Weather cooperating, people in the eastern United States, South America, Europe and Africa will witness the entire eclipse; it will already be under way when the moon rises around sunset in the western United States, and it will not be visible at all in Asia and Australia.

The eclipse reaches totality at around 8:06 p.m. EST Monday. That stage — when the moon, Earth and sun are lined up precisely and the moon passes through the darkest part of Earth's shadow — lasts just 24 minutes.

Unlike eclipses of the sun, which can damage viewers' unprotected eyes, lunar eclipses are safe to watch with the naked eye or binoculars.

Total lunar eclipses come in many colors, from dark brown and red to bright orange, yellow and even gray, depending on how much dust and clouds are in the Earth's atmosphere at that time, Maran said.

In ancient times, the phenomenon was believed caused by some unseen monster bloodying the moon, an omen of disaster.

If clouds blot out Saturday's event, disappointed viewers won't have to wait long before the annual Leonid meteor shower arrives.

The shooting star display will peak first for viewers in western Asia, Indonesia and Australia before dawn on Nov. 14th. For western Africa, western Europe, North America and western portions of South America, the display peaks a few days later, on Nov. 19.

Viewers will be able to see 100 or so meteors per hour, some of them fireballs, said Stuart Levy of the Champaign-Urbana Astronomical Society in central Illinois.

Levy's views of spectacular Leonid showers during the past few years were ruined by clouds, but he'll be trying again this month.

"I've missed the best, when people were seeing hundreds of meteors an hour. If I see 100 an hour this time around I'll be happy. It might be a really good show, with luck," he said.

Nov. 28 also will bring a total solar eclipse, although seeing it will require a bit of travel. It will be visible only in Antarctica.