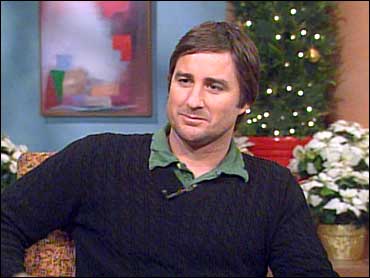 Actor Luke Wilson is keeping busy these days with four films ready to be released in 2006. But before they arrive, there's "The Family Stone," the holiday movie in which Wilson plays a slacker who goes home for the holidays and meets his brother's new girlfriend.

The actor appeared on The Early Show to talk to co-anchor Harry Smith about his latest role.

Much of the romantic comedy "The Family Stone" revolves around the reaction of Wilson's hippie-dippy character to the uptight businesswoman played by Sarah Jessica Parker, whose arrival turns an eccentric extended family upside down.

In the movie, his laid-back character tries to teach the wound-up over-achiever how to relax.

"I think my character, Ben, just kind of responds to the fact that everybody is so hard on her, that she's resilient and keeps trying to make an effort," says Wilson.

The movie has an impressive cast that includes Diane Keaton, Dermot Mulroney and Claire Danes.

Wilson confides that director Thomas Bezucha made the cast play charades during rehearsals to get to know each other.

"I was completely uncomfortable," he says. "I'm not even that good at charades with my friends, but it was fun."

His next movie, "The Wendell Baker Story," is a genuine family affair. In his return to writing and as director, Luke Wilson plays a good-hearted ex-con who gets a job in a retirement hotel and befriends three elderly residents, who help him win back his girlfriend and fight corruption at the hotel. His brother, Andrew Wilson, is co-writer and director, and brother Owen Wilson has a role, too.