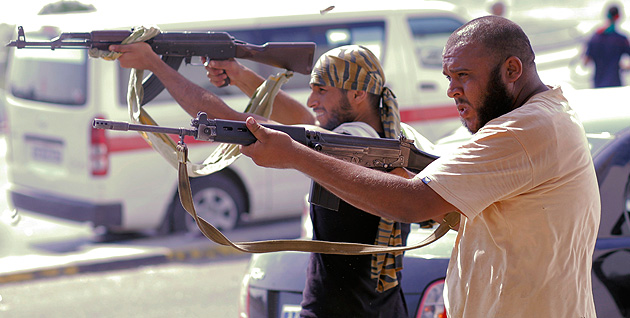 Libyan rebels claimed to be in control of most of the Libyan capital on Monday after their lightning advance on Tripoli heralded the fall of Muammar Qaddafi's nearly 42-year regime. Scattered battles erupted, and the mercurial leader's whereabouts remained unknown.

Rebel spokesman Mohammed Abdel-Rahman, who was in Tripoli, warned of pockets of resistance and said as long as Qaddafi remains on the run the "danger is still there."

Clashes broke out early Monday at Qaddafi's longtime command center known as Bab al-Aziziya early Monday when government tanks emerged from the complex and opened fire at rebels trying to get in, according to Abdel-Rahman and a neighbor. An AP reporter at the nearby Rixos Hotel where foreign journalists stay heard gunfire and loud explosions from the direction of the complex. Electricity and cell phone service are reported out.

"Bab al-Aziziya and the surrounding areas are still out of our control," said rebel leader Mustafa Abdul-Jalil at a press conference Monday in Benghazi. "We have no knowledge of Qaddafi being there, or whether he is still in or outside Libya."

A Pentagon spokesman has told CBS News the U.S. does not believe Qaddafi has left Libya, and that while U.S. surveillance flights will continue, the current position is that there will be no U.S. boots on the ground in a post-Qadaffi Libya.

The Rixos hotel also remained under the control of Qaddafi forces, with two trucks loaded with anti-aircraft machine guns and pro-regime fighters and snipers posted behind trees. BBC News said there are reports the power is out at the Rixos, where many foreign correspondents are trapped.

Al-Arabiya is reporting clashes in central Tripoli between rebels and troops controlled by one of Qaddafi's sons.

The rebels' top diplomat in London, Mahmud Nacua, said opposition forces controlled 95 percent of Tripoli. He vowed "the fighters will turn over every stone to find" Qaddafi and make sure he faced justice.

But Qaddafi's former right-hand man, who defected last week to Italy, said the longtime leader would not go easily.

"I think it's impossible that he'll surrender," Abdel-Salam Jalloud said in an interview broadcast on Italian RAI state radio, adding that "He doesn't have the courage, like Hitler, to kill himself."

A rebel field commander said reinforcements were arriving in Tripoli by sea from the north, south and southeast. "Our fighters are coming from all directions and, God willing, today we will liberate the whole city," the commander, Suleiman Sifaw, told The Associated Press.

Moammar al-Warfali, whose family home is next to the compound, said there appeared to be only a few tanks belonging to the remaining Qaddafi forces that have not fled or surrendered.

"When I climb the stairs and look at it from the roof, I see nothing at Bab al-Aziziya," he said. "NATO has demolished it all and nothing remains."

The rebels' Abdel-Jalil said Monday, "The real moment of victory is when Qaddafi is captured." He vowed to give the Libyan leader a "fair trial with all legal guarantees."

On Monday, rebels erected checkpoints on the western approaches to the city, handing out candy to passengers and inquiring about their destination. Cars leaving the city were subjected to more rigorous checks.

The rebels' leadership council, based in Benghazi, sent out mobile text messages to Tripoli residents, proclaiming, "Long live Free Libya" and urging them to protect public property. Internet service returned to the capital for the first time in six months.

The startling rebel breakthrough, after a long deadlock in Libya's 6-month-old civil war, was the culmination of a closely coordinated plan by rebels, NATO and anti-Qaddafi residents inside Tripoli, rebel leaders said. Rebel fighters from the west swept over 20 miles in a matter of hours Sunday, taking town after town and overwhelming a major military base as residents poured out to cheer them. At the same time, Tripoli residents secretly armed by rebels rose up.

State TV broadcast bitter audio pleas by Qaddafi for Libyans to defend his regime as the rebels advanced on Sunday. Opposition fighters captured his son and one-time heir apparent, Seif al-Islam, who along with his father faces charges of crimes against humanity at the International Criminal Court in the Netherlands. Another son was under house arrest.

"It's over, frizz-head," chanted hundreds of jubilant men and women massed in Green Square late Sunday, using a mocking nickname of the curly-haired Qaddafi. The revelers fired shots in the air, clapped and waved the rebels' tricolor flag. Some set fire to the green flag of Qaddafi's regime and shot holes in a poster with the leader's image.

Below: YouTube video of celebrations in the streets of Fashloum overnight.

But Qaddafi's defiant audio messages raised the possibility of a last-ditch fight over the capital, home to 2 million people. Qaddafi, who was not shown, called on supporters to march in the streets of the capital and "purify it" of "the rats."

Government spokesman Moussa Ibrahim also claimed the regime has "thousands and thousands of fighters" and vowed: "We will fight. We have whole cities on our sides. They are coming en masse to protect Tripoli to join the fight."

South Africa, which led failed African Union efforts to mediate between the rebels and Qaddafi, refused to offer support to the rebels on Monday, saying it wants to see a unity government put in place as a transitional authority. But speaking to reporters, Foreign Minister Maite Nkoana-Mashabane said she did not envision a role for Qaddafi on such a transitional body, saying he had told AU mediators four months ago he was ready to give up leadership.

Nkoana-Mashabane also said repeatedly that South Africa has sent no planes to Libya to evacuate Qaddafi, has received no request from him for asylum and is involved in no efforts to extricate him.

Nkoana-Mashabane also said, "We don't know his (Qaddafi's) whereabouts. We assume he is still in Libya."