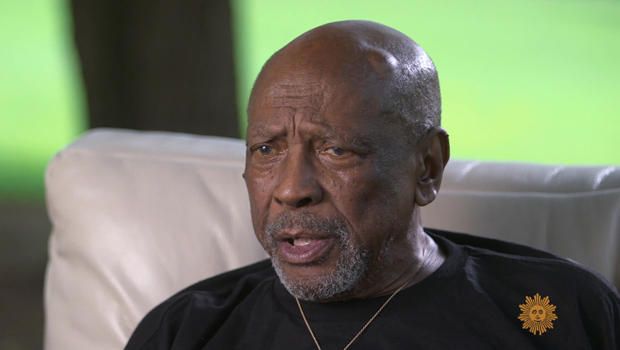 Louis Gossett Jr. has made a career out of commanding performances. As Richard Gere's drill sergeant in "An Officer and a Gentleman," he turned basic training into a master class.

A working actor since the early 1950s, Gossett has played hundreds of roles over the decades, including Anwar Sadat, a fighter pilot, a musician, and even an alien.

"Seventy years, that is a long time."

Miller asked, "I take it retiring isn't something you're considering?"

"As long as I'm here, there is a job to do for the benefit of us all, for what it's worth," he said.

Born in 1936, Gossett grew up in the melting pot of Coney Island, New York, surrounded by friends and families who cared for one another, especially around dinnertime.

"We had nothing. That's what we thought we had," he said. "And if my parents didn't get home in time, I had a choice: I could have gefilte fish, I could have lasagna, have menudo, corned beef and cabbage – depends on who was home."

He had dreams of being a doctor or athlete, but a high school English teacher saw something else in the class president: "He used to say, 'Louis, I see they're looking for a young man to play a lead in a Broadway show. I know you never saw a play. But tell your mother to take you down there Sunday. What can you lose?'"

He got the part, on Broadway, at 17. And by 23 he was already working with legends, as an original cast member in "A Raisin in the Sun," Lorraine Hansberry's tale of a black family on the south side of Chicago.

Gosett said, "I'm fortunate to have worked with Sidney Poitier, Diana Sands, Ruby Dee. What a pleasure. Showed me what was good and what was bad. They taught me about that. And I fell in love. It's in my bloodstream."

And soon he set his sights on Hollywood – but it wasn't open arms that awaited him.

Miller said, "So, then your agent gets you a role on television and you fly out to L.A. First day in L.A., what happens?"

"Oh, Sam Cooke was doing the thing within five minutes!"

Gossett was driving down the road listening to the radio, when he was stopped by police. "So, I turned it off and I looked at the cops and they said, 'Who are you?' And I said, 'Louis Gossett, I'm here to do –'  'Just shut up.' Took me outta the car and put me on a curb. And they looked at me. And I had never had that done to me, even though I'd been in the South. …

"After about 25 minutes, 'Behave yourself and turn that music down.' Get back in the car and go another ten feet." A siren!  He was stopped again.

"'Get out.' Now I'm on the ground in front of my own car. They're still looking for something. Another 15 minutes. They came back and handcuffed me to a tree for three hours. 1966.

"Something happened to my system. You know, have to look over and be careful. Because that sensation did damage to me. So, when they say Black lives matter? All lives matter, because not only did they hurt me, but they hurt themselves."

While the experience changed him, it would not stop him. Gossett kept working, and in 1977 landed the pivotal part of Fiddler in "Roots," which at the time was the most-watched TV miniseries in history.

The character of Fiddler was thought of by some as an "Uncle Tom."

"Yeah, it was a mistake," Gossett said.

"A mistake? He's not an Uncle Tom?" asked Miller.

"No, there was no such thing as an Uncle Tom. Without that survival thing, I wouldn't be sitting here talking to you. We have to find a way to get our needs met."

Of the character he said, "We look for those magic moments as actors and actresses, when there's lightning in the bottle."

"Roots" was big. But what came next made history. With his riveting portrayal in "An Officer and a Gentleman," Gossett earned rave reviews … and became the first Black American to win the Academy Award for Best Supporting Actor.

Miller asked, "When your name is actually called, did you believe it?"

"No, I didn't," he said. "My agent hit me in the chest and said, 'They mentioned your name!' And I had to look at him 'cause I thought I was asleep. And I looked around and there was applause. Not supposed to be possible. So, that's a piece of history."

But with success came excess – and Gossett would fall victim to his own fame and addiction.

"I'd get all the good reviews, which I did. And then finally, the field was set and fertilized with the people that I thought were having the best fun, Black and White. They were laughing a lot, had all the girls, Studio 54, all the nightclubs, all the Playboy mansions and stuff.

"They invited me in. I thought that was it. Turned out that was not it. I got caught with all that stuff. And with each time I did it, I got worse. So, thank God I was able to correct myself and turn it around."

Clean and sober, Gossett continues to act. He's in HBO's "Watchmen," and has two new films out this year, including "The Cuban," where he plays a man with Alzheimer's disease.

Louis Gossett Jr. is committed to his craft, but the greatest advice he says he gives isn't about acting; it's about understanding.

"We better take care of ourselves and one another better," he said. "Otherwise, nobody's gonna win anything. We need each other quite desperately for our mutual salvation."

To watch a trailer for "The Cuban" click on the video player below: