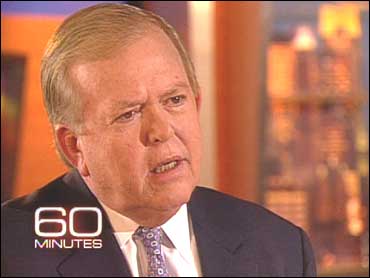 For over 20 years, as the host of "Moneyline" on CNN, Lou Dobbs all but created television business reporting. He was seen as a booster of capitalism, and of the corporate executives he covered.

But today, that mild-mannered friend of CEOs has morphed into an anti-business champion of the middle class – and a "Johnny One Note" on the evils of illegal immigration.

The more he rails, the more his audience grows; his ratings have nearly doubled in the last two years.

As correspondent Lesley Stahl reports, his supporters want him to run for president, his critics want CNN to fire him, and some in Congress just want him to be quiet.

If you're looking for your traditional, detached, impartial news show, do not come knocking on Lou Dobbs' door. His show on CNN has become a nightly rage fest.

If you had to describe Dobbs today, you'd say he's a mad-as-hell anti-establishmentarian. But didn't he used to be exactly the opposite?

When he was the popular anchor of CNN's "Moneyline" in the 1980s and 90s, he was one of the reasons CEOs became celebrities. But when the corporate corruption scandals broke in 2001, Dobbs says he felt betrayed and began attacking those CEOs for, their "greed" and for selling out American workers by outsourcing jobs overseas.

"Think about the words we don't hear any longer in this from corporate America: 'corporate citizenship,' 'empowerment of employees,' 'doing good for the community,'" Dobbs tells Stahl.

"This was a big, huge transformation," Stahl remarks. "It's like somebody invaded you."

"Well, here's what they say about you: that you distort the figures, that you exaggerate and that you aim to inflame just to get ratings," Stahl says.

"Oh, really?" Dobbs replies. "That's fascinating, because what I can't understand is why other journalists would not take on the issues of free trade, illegal immigration, outsourcing—all of these rather sexy topics … which I've been covering for years."

"Reporters don't 'take on' issues. Reporters 'report' issues, and there's a big difference there," Stahl says. "Do you think you're a journalist?"

"Absolutely," Dobbs says. "I may be an advocacy journalist, but I'm a journalist."

One of the issues he tackles relentlessly is illegal immigration. And on that, his critics say, his advocacy can get in the way of the facts.

Following a report on illegal immigrants carrying diseases into the U.S., one of the correspondents on his show, Christine Romans, told Dobbs that there have been 7,000 cases of leprosy in the U.S. in the past three years.

60 Minutes checked that and found a report issued by the U.S. Department of Health and Human Services, saying that 7,000 is the number of leprosy cases over the last 30 years, not the past three. The report also says that nobody knows how many of those cases involve illegal immigrants.

"Well, I can tell you this. If we reported it, it's a fact," Dobbs replies.

"You can't tell me that. You did report it," Stahl says.

"How can you guarantee that to me?" Stahl asks.

Says Dobbs, "Because I'm the managing editor. And that's the way we do business. We don't make up numbers, Lesley."

"That's a strange attitude for a reporter to have, 'I don't need anymore facts. I know what the truth is,'" says Mark Potok, who monitors hate groups for the Southern Poverty Law Center.

Potok charges that Dobbs is a fear monger. "The impression you get, pretty strongly I think, day after day, is that sort of all 11 million illegal aliens are bringing leprosy, they're bringing crime, they're bringing all these terrible things to the United States," he explains.

"If these people have come into this country illegally, what is so wrong with somebody taking it up as an advocate?" Stahl asks.

"But that does not sort of give one the go-ahead to say that, you know, 'These are a group of rapists and disease-carrying people who are coming to, you know, essentially destroy the culture of this country.' You know, I think that's a long leap," Potok says.

Dobbs says he's actually for immigration, and that his focus—almost every night—is on illegals and how the government isn't securing our borders.

"Let me ask you about repeating the same topics over and over. Do you does your audience ever get tired of it?" Stahl asks.

"It's interesting you say repeating it," Dobbs remarks.

"Yeah. Over and over," Stahl says.

"I consider it thorough and on-going," Dobbs replies.

It does appear he is hitting a nerve. Dobbs gets 2,000 e-mails a day. He's a new kind of anchorman, less Walter Cronkite than Bill O'Reilly.

Dobbs has described himself as a populist. Asked what he means by that, he says, "An anti-elitist."

Dobbs grew up as far from the centers of power as you can get: in rural Texas and Idaho. He says the family was poor; he picked beans alongside migrant workers in the summers. But he did well in school and ended up going to Harvard University.

"That must've been culture shock, to say the very least. Did the kids make fun of your accent?" Stahl asks.

"I wore cowboy boots, I wore my jeans, I was going to be who the hell I was and as a result, some folks made fun of me," Dobbs recalls.

One day in class a professor asked him where he was from. "And the professor said, 'Idaho?' And he lifted his eyebrows and said, 'Mr. Dobbs, that's the cultural wasteland of America,'" Dobbs remembers. "And the truth of the matter is, he had me pretty well pegged, but he didn't have to say it out loud. You know."

One thing's for sure: Dobbs never left that farm-boy behind. He lives on a 300 acre farm in New Jersey and commutes three hours a day—every day—to and from CNN in New York.

"Are you a gentleman farmer? Is that the right expression?" Stahl asks Dobbs, during a walk on his farm.

"Well, the word would be half-ass farmer," Dobbs says.

The farm is sort of a compound. He lives there with 25 horses, four dogs, a cat, his wife, his 97-year-old mother, and his wife's parents, the in-laws.

Dobbs met his wife Debi at CNN when she was a sportscaster; they've been married 25 years. "He's a small-town boy, country boy. He used to say he was a country boy who's been to the big city," she says.

Dobbs' wife acknowledges her husband is an incredibly tough debater. Asked if she ever wins arguments with her husband, she tells Stahl, "Do I ever win? Of course, Lesley. … Most of 'em."

But she says she tends to agree with what Lou says on his show.

"You never watch him and call him on the phone or wait till he gets home and say, 'Now Lou, tonight you just went too far?'" Stahl asks.

"We do discuss the show. But in terms of going too far, no. Usually, I'll say, 'You didn't go far enough,'" Debi Dobbs says.

There are many who do think Dobbs goes too far. He has become such a scold on the subject of illegal immigration, comedians like Stephen Colbert have teased him about it.

"How do you like our fence?" Colbert asked Dobbs during an appearance on "The Colbert Report," while showing off a prop fence.

"It's very impressive. And better than some of the fence along our border now," Dobbs replied.

"I'm a border fence fan," Colbert said. "I just think we haven't done enough. …Flaming trenches filled with fire-proof... No. No. No. Lou."

But there's little humor on Dobbs' show, with his assaults on the estimated 11 million illegal immigrants, who he says are endangering the American way of life.

"I happen to think that it is necessary, given the fact that the federal government won't control immigration and won't control our borders," Dobbs says.

"But if you cut off the social, health services, things like that, education … for the kids, do you create a whole other crisis if you do that?" Stahl asks.

"Medical services, no one wants to end," Dobbs says. "But going to food stamps, should taxpayers be paying for food stamps? Should taxpayers be burdened with schools that are overcrowded? Their children therefore are being denied education. Those are very serious issues."

He all but campaigns against the president's guest worker proposal, and seems to suggest that all illegals should be rounded up.

"I wonder if you think that we can possibly deport all of those people. Is that something…," Stahl asks.

"I've never called for their deportation," Dobbs says. "But at the same time, when this president and open-borders, illegal-alien-amnesty advocates say, 'You can't deport them,' my answer is, 'You wanna bet?' Because this is the United States."

"We can't even find them," Stahl points out. "How're you going to round them up? I'm serious. If you think it's possible. How's it possible?"

"I think this country can do anything it sets its mind to," says Dobbs.

It's that kind of talk that has Hispanic groups calling on CNN to fire Dobbs and accusing him of racism. That, he says "really gets to him."

"Lesley, I have worked with migrant workers in the fields. I'm probably one of the few people in the debate who actually has. I've got the greatest respect for those folks. Hard-working, decent, and back-breaking work," Dobbs tells Stahl.

If that pat on the back is surprising, given the tone of his show, there's something even more surprising, something he never brings up: the fact that his wife Debi is Mexican-American.

Dobbs was not amused when he met with the Congressional Hispanic Caucus in Washington.

"Did they accuse you of being anti-Hispanic?" Stahl asks.

"That was the implication without question," Dobbs says. "And I was asked if I'd ever eaten a taco before, for God's sake. Pretty amazing stuff."

"They asked you if you'd ever eaten a taco?" Stahl asks.

"Yeah. And an enchilada. These are new things to me," Dobbs says.

(Editor's Note: After Lou Dobbs told Lesley Stahl about a meeting he had with the Congressional Hispanic Caucus, Rep. Luis V. Guitierrez, a member of the caucus, wrote a letter to 60 Minutes, responding to Dobbs' characterization of the meeting. Click here to read the letter.)
Given his family, the crusade against illegal immigrants may seem like a disconnect. But Dobbs is full of contradictions: he's pro-abortion rights, but against gun control; a fiscal conservative who supports government regulation. He was a registered Republican.

He admits he is not a fan of President George W. Bush. "Whether it's outsourcing, the war in Iraq, just disregard for our middle class…," Dobbs says.

"I'm sitting here saying to myself, 'This man runs a news show? … And you can just tell me you don't like the president. Woo," Stahl remarks.

"I, matter of fact, insist that the audience know where I come from," Dobbs says.

"What about fair and balanced?" Stahl asks.

"I've never, Lesley, found the truth to be fair and balanced. I've found it to be…," Dobbs remarks.

"But, that's, but wait, what's the definition of 'journalism?' That that's in there. That has to be part of what a journalist is, is fair and balanced," Stahl remarks.

"But, it's your reality," Stahl remarks.

"It is my reality," Dobbs acknowledges.

Dobbs scoffs at suggestions that his "advocacy" tarnishes his credentials as a journalist. "The idea that a reporter should be disqualified because he or she actually cares, actually isn't neutral about the well-being of the country and its people, that's absurd," he says.

The coronavirus variants experts are most concerned about