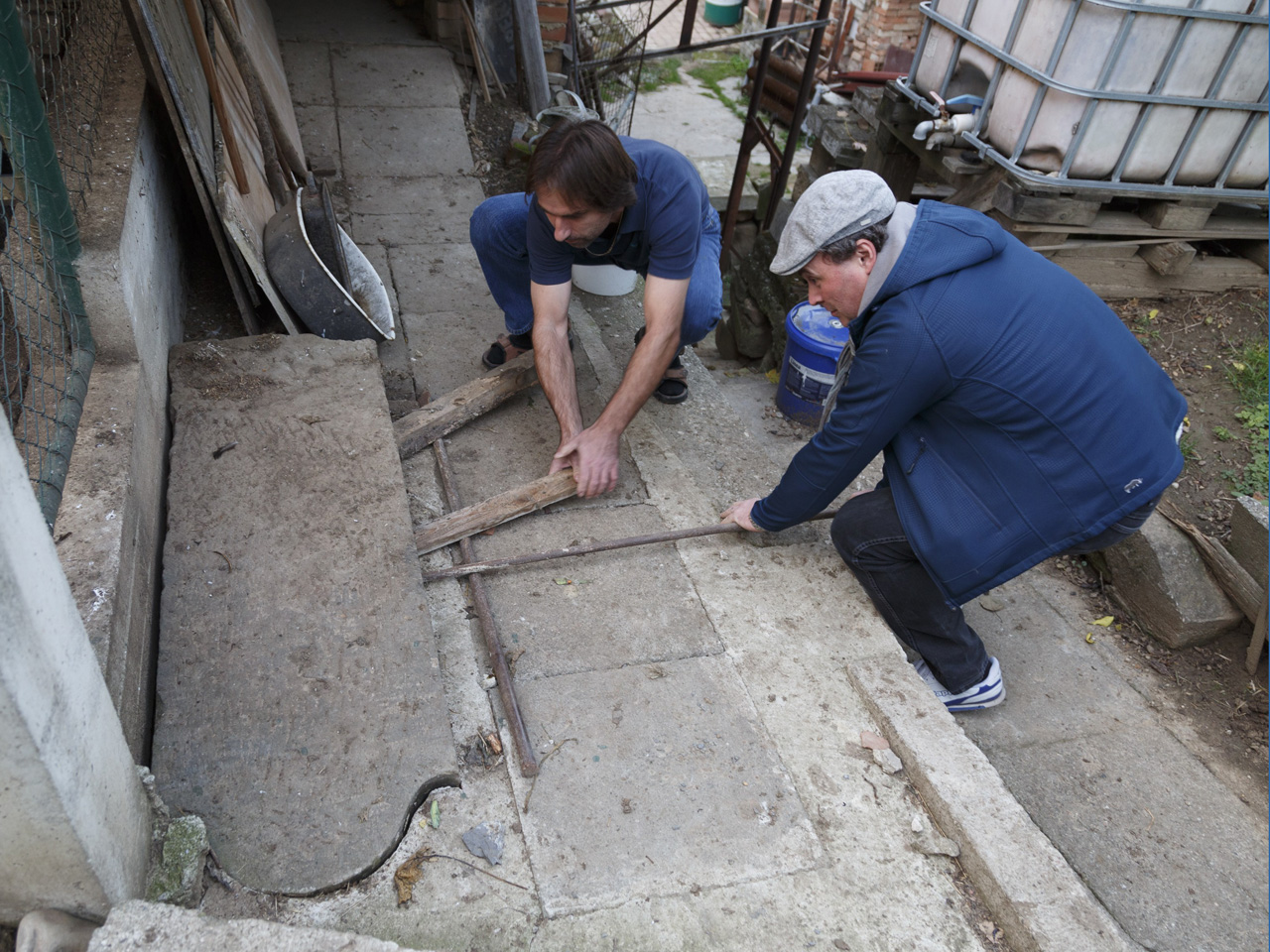 PROSTEJOV, Czech Republic -- There was no mistaking what the stone slab was, only the spot where it lay was somehow not fitting. Instead of marking a place of the departed, the tombstone served as a doormat to a henhouse in a small Czech village.

Confronting the dark legacy of the Holocaust, a small team of researchers has been working to reassemble a Jewish cemetery in the eastern city of Prostejov that was destroyed during the Nazi occupation. The Nazi death machine killed 6 million Jews in the Holocaust, wiping out a third of world Jewry - and didn't even let those already dead rest in peace.

The discovery of Prostejov's lost graveyard was a result of efforts to find roughly 2,000 tombstones that were desecrated and disappeared more than 70 years ago in what was then Czechoslovakia. Dozens of Jewish cemeteries faced the same eradication as the one in Prostejov.

Turned upside down and after a bit of cleaning, the tombstone found at the entrance to the henhouse, in a village outside Prostejov, revealed a Hebrew inscription that was hidden for decades.

Bearing the name Juli Rosenthal, it reads: "Here lies a modest and righteous woman, Mrs. Yittel, the wife of our dear teacher Mr. Leib Rosenthal, may he be long alive, who passed away 76 years old."

New York philanthropist Louis Kestenbaum first drew attention to the cemetery when he was looking for the tomb of Prostejov Rabbi Zvi Horowitz, who died in 1816.

"His writings are still revered in Jewish communities throughout the world," Kestenbaum told The Associated Press by email. "For Rabbi Horowitz and other great rabbis from the region, Prostejov is known as a major seat of Jewish learning and culture. This makes the cemetery an important monument in both Jewish and Czech history."

Indeed, Prostejov was for centuries home to one of the most significant Jewish communities in the eastern part of the country known as Moravia. The Jewish philosopher Edmund Husserl was born here, and his relatives were buried at the town's Jewish cemetery, as were family members of celebrated author Stefan Zweig.

The local Jews used the cemetery from 1801 until the beginning of the 20th century. Before the Nazis took over, the Jewish community rejected proposals from City Hall to sell the site. After the transport to the Terezin concentration camp of nearly all the town's 1,442 local Jews, as well as 250 others who came as refugees, the graveyard was doomed to destruction, said Marie Dokoupilova, a historian in the local museum. Only some 200 of those sent to Nazi camps survived the Holocaust, and most of them left the country to live in Israel and elsewhere. Today, there are less than a dozen Jews living in Prostejov.

Dokoupilova, who wrote the only Czech study about the site, said all 1,924 tombstones were desecrated, likely in 1943, and no documents are available to clarify their fate. The search for a site that disappeared such a long time ago in the wartime chaos looked like mission impossible at the beginning, said Tomas Jelinek, who is leading the cemetery effort.

"At the start, we had no clue, experts knew nothing," he said. "But we thought that it was impossible for such a big numbers of stones, and some of them were quite big, to completely evaporate without a trace."

That hunch was proven right after they published an announcement about the project in a City Hall newspaper. The team didn't have to wait long for responses from people with information about stones they had in their homes, or tips on where they could be found.

Since the project kicked off in July, Jelinek and his collaborators have tracked down about 150 tombstones or their fragments: "I consider it a small miracle," Jelinek said. "It's a huge surprise."

Preserved plans and details of the cemetery, including the inscriptions stored at the archive of Prague's Jewish Museum, make it possible to identify the people they belonged to. Their living relatives now have an unexpected chance to rediscover their family past - previously considered lost forever.

"I was surprised when I heard about the tombstone," Andrew Koss from Colorado Springs, Colorado, told the AP by email. His great-grandmother Hana Fleicher was buried in Prostejov in 1852, and a part of her tombstone was reported found by in the village of Seloutky - the first piece recovered following the newspaper announcement.

Many of the tombstones were smashed up and used for building. In the village of Zesov, an entire cellar was built of them in the same garden where Mrs. Rosenthal's tombstone had lain. David Hanousek, the owner, had no problem agreeing to return all the tombstone pieces found on his property. "I have no intention to keep them," Hanousek said.

In a recent discovery, a whole backyard of a house in Prostejov was paved with some 50 large tombstone blocs. Anna Holestova said she moved to her grandmother's home 25 years ago, and was told her grandfather brought the stones there since they were given out for free during the war.

"It feels weird to walk on them," Holestova said. "They should be taken to the place they belong to."

After the war, the cemetery was used as a sports ground. In the 1950s, it was an amusement park for a while. Today, it is a public park where local residents walk their dogs.

"In Jewish law and tradition, cemeteries are sacred places that must not be disturbed," Kestenbaum said. "The site is a cemetery, plain and simple, and it needs to be preserved as such in keeping with Jewish tradition."

Jelinek believes that can happen.

In December, a new design for the Jewish cemetery will be presented to local authorities.