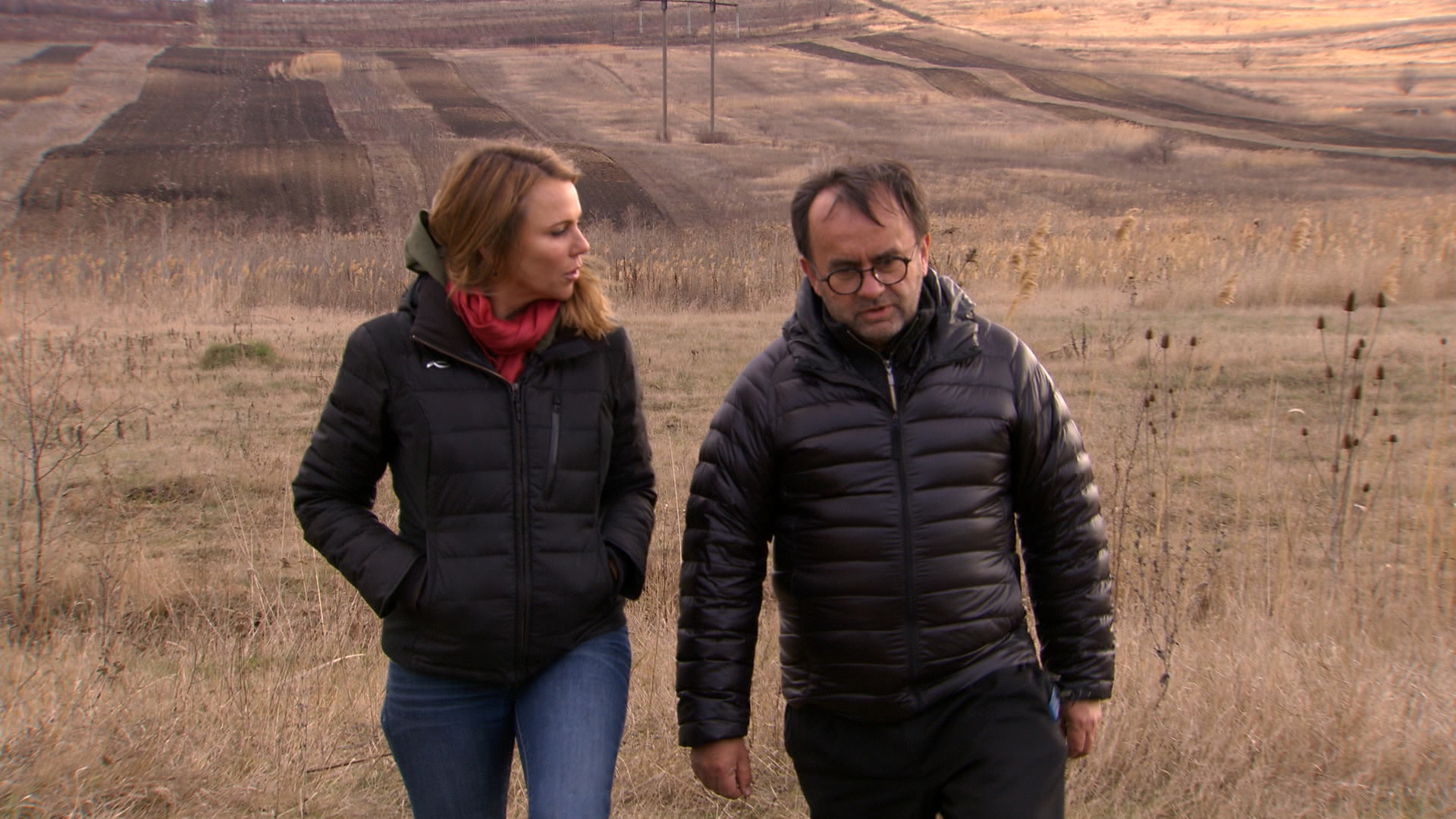 The following is a script from "The Hidden Holocaust" which aired on October 4, 2015. Lara Logan is the correspondent. Alan Goldberg, producer.

The Holocaust is marked and memorialized at places like Auschwitz, Bergen Belsen, Dachau. But nearly half of the six million Jewish victims were executed in fields and forests and ravines, places that were not named and remain mostly unmarked today. They were slaughtered in mass shootings and buried in mass graves in the former Soviet Union, where until very recently, little had been done to find them.

Our story is about a man who's brought these crimes of the Holocaust to light. He is not a historian, or a detective or a Jew. He's a French Catholic priest named Father Patrick Desbois. And for the past 13 years, he has been tracking down the sites where many of the victims lie and searching for witnesses who are still alive; many of whom had never been asked before to describe the horrors they had seen more than 70 years ago.

Father Desbois: The general order was to eliminate the last Jew, even the baby, even the old mommy. They never left anybody.

Lara Logan: So it was a policy of total annihilation.

Father Desbois: Total annihilation. And if Hitler didn't lose the war, I think today will not be one Jew alive.

Father Patrick Desbois is on a mission across Eastern Europe to find Hitler's hidden killing fields. Before him lies a continent of extermination.

Lara Logan: These mass graves and extermination sites, many of them are invisible?

Lara Logan: And many of them would never be recorded.

Father Desbois: And never be recorded and still buried like animals.

We traveled with Father Desbois to the former Soviet Republic of Moldova, where in one day he took us to four unmarked mass graves. In this field, he told us, 60 Jews beneath this farm, 100 above this city, under this hill, a thousand.

Lara Logan: A thousand bodies, do you think they're still here?

Thousands of eyewitnesses, millions of documents and 15 years of investigating have led him to more than 1,700 execution sites. Once in Ukraine, under the supervision of a rabbi, he excavated one. Jewish tradition forbids moving the dead once buried and the evidence was just beneath the surface.

Father Desbois: And, it was officially a place where no Jew have been killed, and we found 17 mass graves.

Lara Logan: And what did you find when you excavated?

Father Desbois: You find everything. You see a mother with handing his boy until the end. And the boy try to go out. You see that another one was buried alive so she had the mouth open because she was buried with the earth.

In June, 1941, Hitler invaded the Soviet Union. Just behind his frontline troops were mobile death squads known as the Einsatzgruppen, whose job was to hunt down every last Jew. They methodically entered villages, rounded up Jewish families, and marched them to freshly dug graves. Some of the remains are buried beneath this mound in Lithuania. The assassins reached even the most remote corners, like Hiriseni, a tiny village in Moldova.

Lara Logan: So when the killers came here, they really had only one purpose.

The village is virtually unchanged since the Nazis stormed through here. Father Desbois' team had gone ahead of us, searching for eyewitnesses to a 70-year-old crime. They were led to an 85-year-old named Gheorghe, still working in this vineyard. Father Desbois told us the first question they ask is always the same...

Gheorghe was eleven years old then. And he still remembers what he witnessed.

Gheorghe: As soon as they came, they locked everyone up. I saw them taking them away.

He asked him where the Jews were killed.

Gheorghe: It's a ravine over there, come and see if you want.

Lara Logan: So what you're learning here is completely unrecorded?

Father Desbois: Yeah, if we didn't come, we'll never know they killed Jews. These Jews would have never been counted as dead, never known, and the mass grave is totally unknown.

Gheorghe brought us down this road where, he said, all the Jewish families from the village were taken. He told us the day of the shooting he was tending to cows nearby. Now 70 years later, we watched as he traced the victims steps to the edge of the ravine.

Lara Logan: He said it was a beautiful day exactly--

Lara Logan: With the sunshine.

Father Desbois: With the sunshine, yeah.

Lara Logan: When you're doing this, when you're here and in a place like this, do you ever stop and think how did I get here?

Father Desbois: No, always I say to people, "Finally we found you. Finally we came back."

Father Desbois leads no congregation, he considers his search for these Jewish victims his calling.

Lara Logan: You're not your typical priest.

With the blessing of his cardinal and the Vatican, he created, in 2004, the organization Yahad-In Unum, "Together as One."

Father Desbois: We began, so the first thing is to get the map...

Based in Paris, his team begins by combing through millions of pages of German documents; comparing them to Soviet archives that only became available after the collapse of the Soviet Union. They search for clues that lead them to villages where witnesses point them to mass graves. They always record and archive the witness testimonies.

[Woman Witness: The day we came to see they brought a lot of Jews here...]

To date, they have recorded over 4,000 witnesses who were children at the time.

[Oleksiy, Ukraine: The Germans started to drink and after, they fired again over the pit.]

Many were recruited by the Nazis or local police to dig the mass graves or to take the gold teeth, jewelry and clothing of the victims.

[Vladimir, Ukraine: The pit was barely covered so we could even see their legs and arms.]

[Jan, Poland: We could see the blood bubbling.]

[Anna, Ukraine: They were screaming, the children were crying. When the pit was full they filled it with little earth. For three days the ground moved. Some were still alive.]

Lara Logan: What have we learned about the Holocaust that we didn't know before you began your investigations?

It was a dramatic finding: that villagers chose to watch people being lined up and murdered; a revelation he would never have come to were it not for his grandfather Claudius Desbois. He was held as a prisoner of war in a Nazi camp in the Ukrainian village of Rawa Ruska. But he never wanted to talk about it. Father Desbois was drawn to the village to find out what happened there. He made repeated trips, but no one would talk to him, until one night when the mayor took him to the edge of the forest where 50 elderly villagers were waiting.

Father Desbois: And he said, "Patrick, I bring you at the mass grave of the last 1,500 Jews of Rawa Ruska." Like in a movie.

Lara Logan: One by one, they told you their stories, what they witnessed.

Lara Logan: Fifty of them.

Lara Logan: You believed that the Jews were killed in secret.

Father Desbois: Yeah, because everybody told me, and I have read many books about the secret of Holocaust. And in Soviet Union, everybody told me they knew nothing and-- because it was secret.

What he learned disturbed him. The killings were spectacles; they took place in broad daylight, in front of entire villages.

Father Desbois: They were fighting to have a good place like for circus.

Lara Logan: There's no way you couldn't have known.

Father Desbois: Not only that, but they were running when they heard when they were killing Jews, to see, to try to catch a coin, to check out your clothes, to take a picture. They wanted to be there.

This photo of a mass shooting is from the Imperial War Museum Archives in London, dated September 14, 1941.

Father Desbois: And it's a ditch. Here we have a woman with a child.

You don't see any spectators, but Father Desbois suspected the crowd was just outside the frame. He followed the picture to the town of Dubassary and it brought him to the home of 81-year-old, Anatoli who was 8 back then. He said he was at the massacre, alongside his mother.

Anatoli:We were standing somewhere here. And here were the trenches, here they were falling.

The carnage lasted two weeks. Dimitri, then 16, said he was there too. He told us he watched from a tree as the Nazis and collaborators fired on groups of 20 people at a time.

Father Desbois: And he thinks how many Jews have been killed like that?

Dimitri: It was about 18-and-a-half thousand people--

"[Father Desbois] has opened the door to the use of multiple sources to understand what really happened on the ground in a big part of Europe."

A number much higher than the official records; which doesn't surprise Father Desbois who says the death tolls are often under reported. The bodies are right behind Dimitri's house in these 11 mass graves...one of the few Jewish sites in Eastern Europe that's marked and protected.

Father Desbois: I never saw one like that among the 1,700 extermination sites where I've been.

No one has shined more light on this dark chapter than Father Desbois according to Paul Shapiro, the director of the Mandel Center for Advanced Holocaust Studies at the United States Holocaust Memorial Museum, who also sits on Yahad's scientific board.

Paul Shapiro: The method that he's used, extraordinary. We can understand minute-by-minute what happened in hundreds of localities where before we just had fog.

Lara Logan: How reliable is his work?

Paul Shapiro: He has opened the door to the use of multiple sources to understand what really happened on the ground in a big part of Europe.

Father Desbois: The babies were shot too?

We found Father Desbois a cautious and skeptical interviewer.

Dimitri: When a woman with a baby would approach the pit, they forced her to hold the baby in sight, first they shot the baby and then her.

He never judged or showed emotion as he listened to the darkest accounts of humanity. And if he suspected a witness was holding back or lying he returned to question them again. Father Desbois insists that every killing site they find is memorialized by recording the GPS coordinates. They never physically mark the graves because he says people would loot them.

Father Desbois believes when his work is finished the number of Jewish victims will total more than has been previously documented. But the number, he says, is less important than giving meaning to their lives. Sometimes in a small village, he'll find a witness, like 80-year-old Anatoly, who remembers not only the death of his Jewish neighbors but their names.

Father Desbois: It's like if he was waiting for us in 70 years and now we are here. Every time I come with my team, I say, "They are waiting for us."

Lara Logan: It did seem like he was waiting for you--