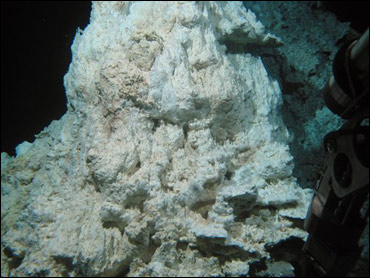 A strange world of see-through shrimp, crabs and other life forms teems around a newly explored field of thermal vents near the middle of the Atlantic Ocean, scientists report.

Towering white mineral chimneys mark the field, named the Lost City, a sharp contrast to the better-known black smoker vents that have been studied in recent years.

The discovery shows "how little we know about the ocean," lead researcher Deborah S. Kelley of the University of Washington said.

"I have been working on black smokers for about 20 years, and you sort of think you have a good idea what's going on," she said in a telephone interview. "But the ocean is a big place and there are still important opportunities for discovery."

The Lost City was discovered by accident in 2000 as Kelley and others studied undersea areas near the mid-ocean ridge.

They returned to the area in 2003 to analyze what they had found and were startled to learn how different the new vent environment and its residents were from the ones studied before.

Their findings are reported in Friday's issue of the journal Science.

Black smokers are chimney-like structures that form when very hot water - reaching 700 degrees Fahrenheit - breaks through the ocean floor and comes into contact with frigid ocean water. The minerals that crystallize during the process give the chimneys their black color.

At Lost City, on the other hand, the temperature of the escaping fluids is 150 degrees to 170 degrees. The environment is extremely alkaline, compared to the high acid levels at black smokers.

A variety of unusual creatures have been discovered around black smoker vents, including tubeworms that can grow as long as eight feet.

At first the scientists thought there were few animals in Lost City. Then they vacuumed the surface of the white vents and found large numbers of tiny shrimp and crabs, mostly transparent or translucent and less than a half-inch in size, that had been hiding in nooks and crannies, Kelley said.

The total mass of life around the Lost City vents is less than at the black smokers but there is just as much variety, she added.

Microbes found in the chimneys at Lost City - named for the research vessel Atlantis - appear to live off large amounts of methane and hydrogen. There is little or no carbon dioxide, the key energy source for life at black-smoker vents.

There is also little hydrogen sulfide and only very low traces of metals, on which many of the microbes at the black smokers depend.

The report offers the first detailed portrayal of a new type of ecosystem that may be widespread, said Antje Boetius of the Max Planck Institute for Marine Microbiology in Bremen, Germany.

Boetius, who was not part of the research team, said in a commentary on the paper that the amount of living organisms found inside the chimneys at the city was astonishing.

While the black smokers, first discovered in 1979, form at volcanic areas along the oceanic ridges, the Lost City formation was found about nine miles to the side of the ridge. The formation is at latitude 30 degrees north, roughly the same as that of
Jacksonville, Fla.

Also participating in the study were researchers from Duke University; ETH-Zentrum in Zurich, Switzerland; Woods Hole Oceanographic Institution; the National Oceanic and Atmospheric Administration; and the Massachusetts Institute of Technology.

The complicated connection between IQ and prejudice
Thanks for reading CBS NEWS.
Create your free account or log in
for more features.
View CBS News In
CBS News App Open
Chrome Safari Continue
Be the first to know
Get browser notifications for breaking news, live events, and exclusive reporting.