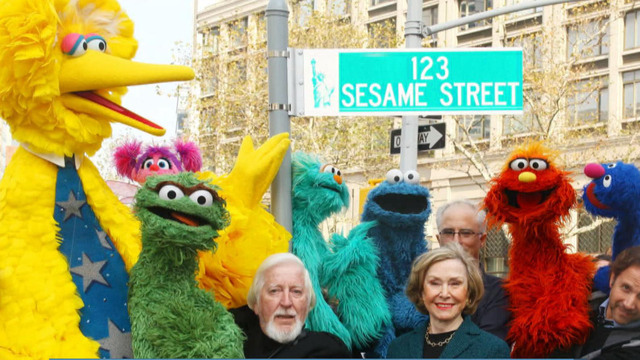 "I'm Puerto Rican, born in New York, watched a lot of television in the fifties, never saw anybody who looked like me on television... If you're not reflected in society, you feel invisible. And I wondered, how was I going to contribute to a society that didn't see me?"

With that in mind, fresh-faced 22-year-old Sonia Manzano showed up at One Lincoln Plaza on New York's Upper West Side one day in 1972. She was performing in the original Broadway production of "Godspell" and was auditioning for one of the most revolutionary shows of the time. It took place in an inner-city. The main characters were minorities, a giant bird and a grumpy puppet in a trash can.

Sonia was auditioning for "Sesame Street."

"My first day on Sesame Street was terrifying," Manzano remembers. "It was a terrifying day. To add to my chagrin and horror, Big Bird stood next to me and said, 'Don't be nervous, there's only going to be millions and millions of people seeing this.'"

It's hard to believe that it's the 45th anniversary of Sesame Street. While many of us grew up with Sesame Street and its zany Muppet residents, very few of us grew up on it. Sonia Manzano was cast as Maria after that audition, one of her first, and never stopped playing the role. She became one of the first Hispanics ever to be on television, one of many ways that "Sesame Street" broke new ground.

"Sesame Street came out of the tumultuous 1960s," Manzano says. "Head Start was seeing kids in a new light. The Civil Rights movement was at its fervor and the idealistic show was going to close the education gap. It was geared towards inner-city kids in the hopes that they would learn basic cognitive skills and then they would start school on an even level with their middle class peers."

The show's idealism became part of its charm.

Children fell in love with "Sesame Street" and it became a cultural icon. In 45 years, the show has won 159 Emmy Awards. Celebrities are a staple on the show. The last four First Ladies have made appearances. In 1996, the Tickle-Me-Elmo doll hit the stores and made $30 million in revenue.

"When I first got on Sesame Street, I had tried to compete with the Muppets, which was futile," Manzano says. "You're not going to be funnier than a Muppet because Muppets can be thrown across a room and still be okay."

Manzano certainly didn't think the show would last this long.

"I think one of the most surprising parts about 'Sesame Street' is that though it's a very American show and we deal with addressing the needs of American children, it is beloved all over the world."

That was apparent to Manzano on set.

"Children really believe in the Muppets," Manzano says. "That was proved to me on the day that Carol Spinney -- who is a light-haired man in his late sixties, early seventies -- took the top half of his Big Bird suit off. There was a little kid in the studio and the little kid turned to me and says, 'Maria, does Big Bird know there's a man in him?'"

Manzano's character, Maria, is based loosely on her life. She has been married and pregnant on the show. But over the years, Manzano says the show has become more Muppet-heavy as opposed to the human stories which pervaded the beginning. But the show has also changed because the needs of children have changed.

"When we started in '69, we presented this idealistic world," Manzano says. "We taught kids basic skills and knowledge about how the world works in the hope that they would grow up and create their own world. Now we are helping kids live in the world that exists for them that adults have created. I think kids have more to deal with now than the creators ever could have imagined."