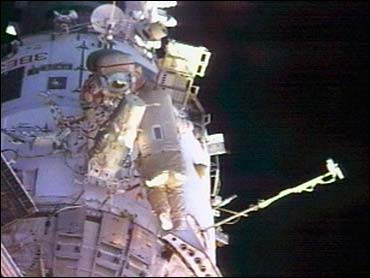 The two space station astronauts left their orbiting home in the hands of ground controllers Wednesday and floated outside to install an experimental robotic arm and inspect vents that might be causing air-supply equipment breakdowns.

The spacewalk — unable to be completely televised because of a cold station antenna — was the first in Leroy Chiao and Salizhan Sharipov's mission, now at the 3½-month point.

"Hello, space, my old friend," Chiao, a veteran spacewalker, said as he exited.

A little earlier, flight controllers teased Sharipov for singing as he got ready to make his first-ever spacewalk. "You could hear that, huh?" he asked with a laugh. The singing and humming continued outside.

Chiao and Sharipov spotted a residue of some sort on and around a trio of vent ports on the exterior of the Russian command module Zvezda that might shed light on past problems with the space station's air rejuvenation system, reports CBS News Space Consultant Bill Harwood.

Extra time was built into the spacewalk schedule to give Chiao and Sharipov time to inspect the vents, which are used to dump trace contaminants and other byproducts overboard from the station's carbon dioxide removal system and its Elektron oxygen generator.

The Elektron, which generates oxygen by breaking down water molecules with electricity, shut down recently because of air bubbles in the system. It later was restored to service, but similar shutdowns have occurred before and engineers are trying to figure out what might be responsible.

Whether the residue spotted Wednesday is a factor, or at least a clue, is not yet known.

"The area of some 15 centimeters in diameter around the vent, black, brownish residue," Sharipov reported through an interpreter. "Elektron vent is all covered, like honeycomb. ... It looks like when the fluid was being dumped, the water evaporated but the solid components got solidified, not only on the vent but at the vent base as well."

The spacewalkers photographed the vents for later transmission to Russian experts on the ground.

Because of the grounding of NASA's shuttle fleet, the international space station has been limited to two residents, one fewer than usual. As a result, no one was left inside during the spacewalk to monitor station systems — flight controllers kept tabs on things, an increasingly common practice in the wake of the Columbia disaster almost exactly two years ago.

Controllers did not get to see the start of the spacewalk 225 miles up because of an unusually cold dish antenna, which was parked in a fixed position at the station. They settled for audio only and said they would view the videotaped event later, after the sun had warmed the antenna.

But the antenna warmed up sooner than expected, and live TV images of the station filled Mission Control's screens less than an hour into the spacewalk. The crisp images lasted only minutes, however, and reappeared sporadically.

Chiao, the American commander, and Sharipov, a Russian, set up the mini robotic arm that arrived on Christmas Day along with much-needed groceries. Food and water were running so low that the spacemen went on a lengthy diet that ended only when the supply ship showed up.

They had a month of hearty eating to beef up for the 5½-hour Russian-managed spacewalk, which involved hauling the robotic arm and its platform over 100 feet.

Germany's $10 million arm — a 20-inch device featuring two joints, two cameras and a fingerlike pin at the end — is a smaller, simpler version of what engineers hope will lead to satellite-repair robonauts in perhaps a few years. An advanced version also could be placed on a rover and assist astronauts on the moon or Mars by collecting rocks and performing other chores, said Klaus Landzettel, project manager at the German Aerospace Center near Munich.

For now, the objective is simply to see whether the arm can move along a 28-inch curved track and survive for a year in the vacuum of space, Landzettel said.

During the spacewalk, flight controllers noticed a repeat of the same mysterious forces that tilted the station on previous astronaut outings. Wednesday's odd, off-center nudges forced the Russian thrusters to temporarily take over steering control from the U.S. gyroscopes several times; the crewmen stayed clear of the thruster firings.

Given Tuesday's late afternoon wake-up, it was expected to be a 20-hour workday for the spacemen, a flight rule violation but a situation that NASA considers unavoidable at times with only two people on board. Flight surgeons vouched for the crew's motivation and strength, even after the mandatory dieting.

One more spacewalk is on tap for Chiao and Sharipov in March, one month before they return to Earth in a Russian capsule.

Since the Columbia disaster, the station has been staffed by rotating two-man crews, one less than usual. Because a third crew member isn't available to monitor the station's systems during spacewalks, precautions are taken to prevent problems.

"We don't have the third crewmember inside to respond to unexpected failures or circumstances that may happen, although unlikely, during the spacewalk," said Derek Hassmann, Expedition 10 EVA flight director. "In a typical situation when we aren't doing a spacewalk, the crew is the first line of defense for critical failures such as, for an example, loss of cabin pressure or a fire or a significant problem with a coolant loop. But of course with both crewmembers outside doing the spacewalk, we don't have the crew to help us respond.

"So one of the things we do is ... set up cameras in the spacecraft that we can use from the ground to remotely monitor the interior of the vehicle while the crew is outside."