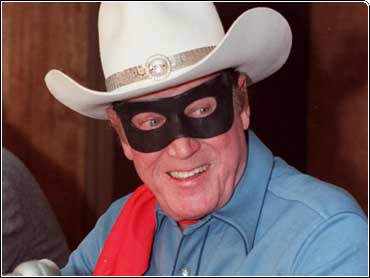 They wore black hats but they were there to honor a good guy.

Hundreds of fans, some in full cowboy dress, showed up Sunday for a public tribute to the late actor Clayton Moore, who portrayed the Lone Ranger on television in the 1950s.

The trademark black mask, white hat and silver bullets Moore used in the TV role were displayed outside the Autry Museum of Western Heritage.

Moore's daughter, Dawn Moore, said she had not intended to hold a public memorial but changed her mind after she was deluged by letters and e-mails from fans.

"I felt very overwhelmed by the show of love for him, and I thought it wasn't fair of me to be selfish and have him to myself, and (not) allow that final goodbye to be said by everyone," she said.

During its heyday, the Lone Ranger series was seen by millions and is still in syndication. Children around the nation could identify the character's "faithful Indian companion, Tonto" - played by late actor Jay Silverheels - and the driving theme music of the William Tell Overture.

Actor Bruce Boxleitner, who played a space commander on the Bablyon 5 TV series, said he and other Americans of the era learned right and wrong from the Lone Ranger and other cowboy shows.

"It was those heroes that gave us that moral strength that we knew our cause was right," he said. "We were the cowboys. We were the Lone Ranger."

Moore played the role on television and in several films beginning in 1949. Friends and family said he preached and lived the Lone Ranger's creed of fair play, self-reliance and self-sacrifice.

Black Stetsons, shiny boots, even a few spurs and dusters were in evidence at the tribute for Moore, who died Dec. 28 at age 85.

Richard Mendez, 48, of Ontario, had a six-shooter on his hip. He belongs to a group that re-enacts Western gunfights and said the Lone Ranger's values are as important now as ever.

"Today, I think we need people that are honest like him, that are for the little guy, that represent the type of goodness that we need out there."

By Robert Jablon
©2000 The Associated Press. All Rights Reserved. This material may not be published, broadcast, rewritten, or redistributed