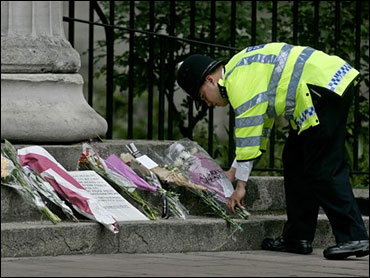 London began the difficult journey toward healing on Friday after in deadly bombings struck its transport system. Commuters cautiously returned to the subways, Muslims wary of a backlash held Friday prayers, and the fabled entertainment districts that canceled shows resumed performances.

But much of the city remained eerily quiet. Bombed subway stations were shrouded in security curtains and refrigerated trucks waited outside to cart away bodies still trapped in the city's deep tunnels.

Police said the bodies of 49 people had been recovered but warned the death toll would rise. An estimated 22 people were in critical condition and many were reported missing, although emergency management officials would not give specific numbers.

"We didn't know where to go," said Sasha Vargas, 22, a college student from San Diego, California who was on her first trip to London when the blasts struck Thursday.

British Transport Police, who oversee the Underground, said crews were still working around the wreckage of a subway train near Russell Square where at least 22 people died. Crews had reached the carriage and had seen other bodies but it could take days to recover them, said Deputy Chief Constable Andy Trotter. Many of the tunnels are more than 100 feet deep and rat infested.

"This is an enclosed tunnel and it is very difficult conditions and it's a bit dangerous," he told reporters. "It will take some time before everyone is removed from there."

Forensic experts have been combing the sites even as the bodies were being removed. CBS News Correspondent Mark Phillips reports that somewhere amid the rubble, there are clues to who did this.

Investigators were sifting through wreckage, poring over hours of closed-circuit TV footage and interviewing witnesses to find answers behind the deadliest attacks the city has seen since World War II. The process could take months.

"Consider the number of routes, the number of scenes, the opportunities which they present, and which is then complicated further by a bus that is moving," Assistant Police Commissioner Andy Hayman said of tracing the attackers movement on surveillance tapes.

"It's almost impossible to stop something like this, at least in my opinion," Mike Adams tells CBS News. "People walk around with backpacks all over the place.

"We're carrying one now. You can't check every single person - it's impossible."

Sir Ian Blair, commissioner of the Metropolitan Police, said he expected the toll to rise but doubted it would reach triple digits.

In an echo of Sept. 11, 2001, Roberts reports there are pictures of the missing. Impromptu shrines display notes of sorrow and outrage.

More than 700 were injured in Thursday's attacks on London — the worst attack in the city since World War II, Blair said, adding that the injured included citizens of at least five countries in addition to Britain — Sierra Leone, Australia, Portugal, Poland and China. One person died in the hospital, where 100 victims spent the night, Blair said.

Authorities have said the attacks bore the signatures of the al Qaeda terror network and current and former American counterterrorism officials said they were taking seriously an Internet claim of responsibility by a group calling itself The Secret Organization of al Qaeda in Europe.

Little was known about the group, but a Web statement in the same name claimed responsibility for the last major terror attack in Europe: the bombs on commuter trains in Madrid in March 2004, that killed 191 people.

In claiming responsibility, the group said the bombings were punishment for Britain's involvement in the war in Iraq and invasion of Afghanistan. It threatened to attack Italy and Denmark for their support of the U.S.-led coalitions in both countries, too.

A senior U.S. counterterrorism official said Thursday that the Internet posting was considered a "potentially very credible" claim, in part because the message appeared soon after the attacks and didn't appeared rushed. The officials spoke on condition of anonymity because investigations were ongoing.

Blair, the police commissioner, said there was no evidence that the attacks involved suicide bombers but that officials hadn't ruled out the possibility.

Weekend concerts by Queen and REM in Hyde Park also were postponed by a week because of safety concerns.

Hayman said officials believe the bombs were placed on the floors of the three subway cars that were hit. He said the initial investigation suggests that each bomb had less than 10 pounds of explosives. The weight of explosives was smaller than recent bombs detonated in the Middle East.

Based on evidence recovered from the rubble, investigators believe some of the bombs were on timers, a U.S. law enforcement official said. The official would not describe the evidence further.

Investigators doubt that cell phones — used in the Madrid train attacks a year ago — were used to detonate the bombs in the Underground because the phones often don't work in the system's tunnels, the official said.

Police denied reports that they had found any unexploded devices. Two suspicious packages in other areas were destroyed in controlled explosions, but Blair said they turned out to be harmless.

Security officials locked patrons inside the British Museum briefly Friday after guards spotted two suitcases found chained together inside the museum. Visitors were let out after they located the bag's owners, two tourists.

Thursday's subway blasts went off over an 18 minute timeframe, starting at 8:51 a.m. An explosion ripped the roof off a double-decker bus less than an hour after the first bombing. The attacks came as world leaders were opening the G-8 summit in Scotland.

Prime Minister Tony Blair, who just the day before had been basking in the glory of Britain's successful Olympics bid,

condemened the attacks
and blamed Islamic extremists. Foreign Minister Jack Straw said the attacks bore the hallmark of al Qaeda, the group responsible for the Sept. 11 attacks in New York and Washington.

Ten of London's 12 subway lines reopened Friday, though service on three was restricted. Bus service was running through central London, except for diversions around blast sites.

Aldona Mosjko, a 21-year-old bagel shop manager from Poland, was among those too frightened to take public transportation Friday. "Normally, I take the bus, but today, I took a taxi. I was a bit afraid," she said.

"But those who perpetrate these brutal acts against innocent people should know that they will not change our way of life," she said.

Some commuters commented on what appeared to be a light police presence at some Underground stations.

"Everyone is very quiet, everybody is a bit anxious," said Anil Patel, 40, a banker. "An obvious (police) presence would have settled your nerves."