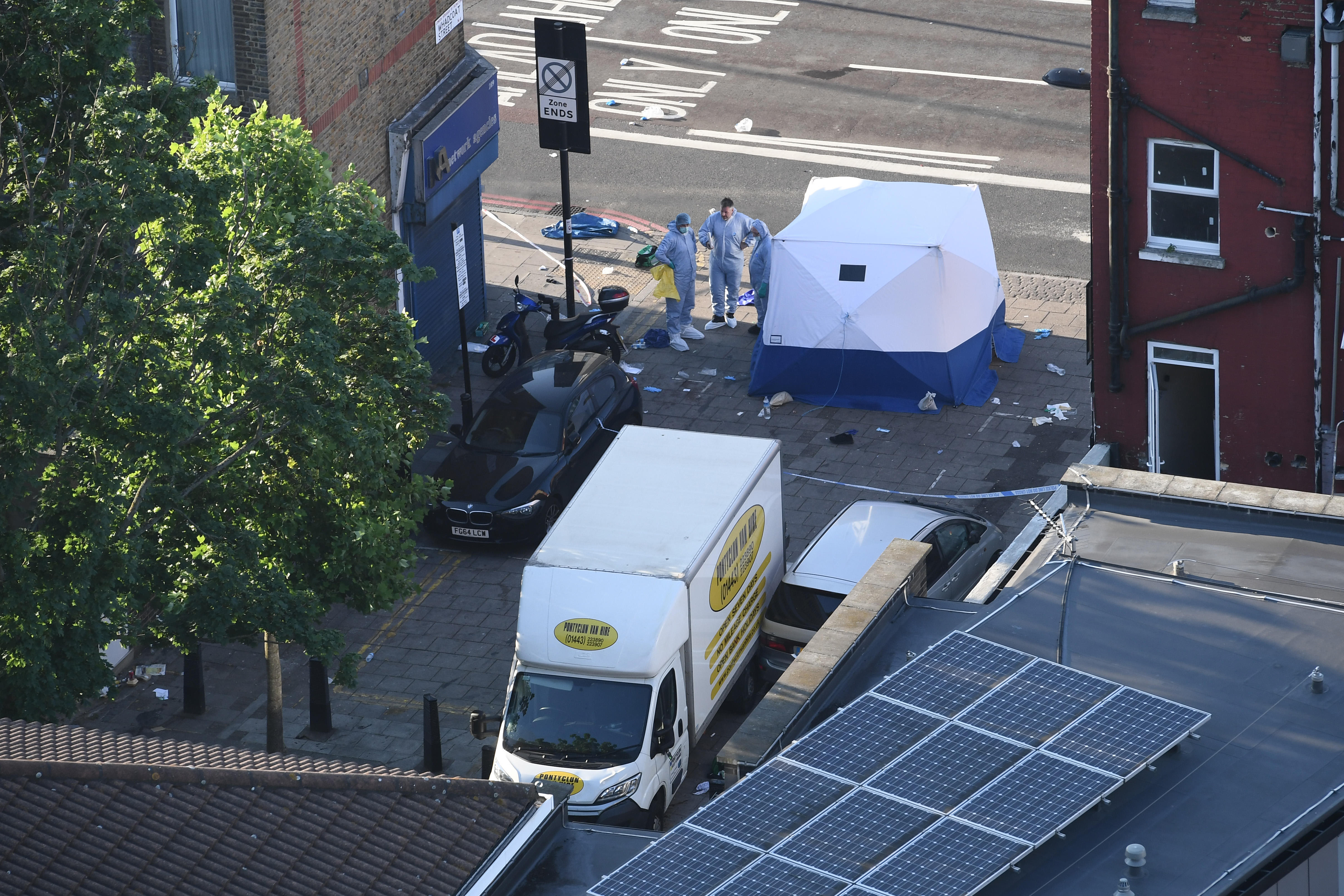 LONDON -- A man slammed a van into a crowd of worshipers leaving a London mosque after midnight Ramadan prayers on Sunday morning in what Prime Minister Theresa May has called "another terrorist attack" in the British capital.

CBS News correspondent Elizabeth Palmer reports one person died at the scene, but police said it was unclear whether his death resulted directly from the vehicle attack.

Ten other people were injured by the van driver, and police were investigating the crash as a terrorist attack.

The driver, identified by May only as a 48-year-old white male, tried to run away but was held by onlookers until officers arrived.

Those targeted in the attack were leaving the local Finsbury Park Mosque and the neighboring Muslim Welfare House, another community Islamic center, just after midnight following Ramadan prayers.

A man who said he helped tackle the van driver to the ground and hold him there until police arrived said the suspect kept shouting that he "wanted to kill more Muslims."

Another witness, Khalid Amin, told the BBC that as members of the public seized the driver, "he was shouting, 'all Muslims, I want to kill all Muslims.' Literally, he said that. Word by word."

Many people at the scene credited the Imam of the Muslim Welfare House, Mohammed Mahmoud, with calming the situation as bystanders held the suspect before police arrived. Mahmoud was heard trying to protect the van driver from some in the crowd who had directed their anger at him.

One man was pronounced dead at the scene and eight more were taken to three separate hospitals with injuries. Two other people were treated at the scene for minor injuries but walked away.

Police later said it was unclear whether the deceased man might have died of an unrelated condition or injuries, as he was already on the ground being treated by bystanders after an apparent collapse when the van drove onto the sidewalk.

"The van literally turned left with no indication, like suddenly, just deliberately left, and then just hit the people," witness Khaled said. "One of them, he was under the van, people were gathered around the van to actually lift the van up to get this guy up from under the van."

Bystanders rushed to pin down the driver of the rented van and held him until the police arrived. The 48-year-old suspect was treated for unspecified injuries before being placed under arrest on suspicion of attempted murder.

Eight other people remained in the hospital on Monday morning.

"Given the methodology, given what's occurring, the tragic incidents across the country, this had all the hallmarks of a terrorist incident," Metropolitan Police Deputy Assistant Commissioner Neil Basu said.

In her remarks outside her official 10 Downing Street residence on Monday, Prime Minister May said the attack was a clear example that "terrorism, extremism and hatred take many forms."

She said the suspect's goal was the same as those who wield violence against civilians in the name of Islam; "to drive us apart."

"We will not let this happen," May said.

London Mayor Sadiq Khan, a Muslim, offered his "thoughts and prayers" on Twitter to the victims of what he called a "horrific terrorist attack on innocent people."

"While this appears to be an attack on a particular community, like the terrible attacks in Manchester, Westminster and London Bridge it is also an assault on all our shared values of tolerance, freedom and respect," he said. "The situation is still unfolding and I urge all Londoners to remain calm and vigilant."

In the hours immediately following the attack, there was anger from some members of the Muslim community in London who felt it took police and government officials too long to declare the incident terrorism.

A young man who spoke to Sky News argued that if it had been a Muslim attacking others in the city, it would have been labelled terrorism more quickly, and he called for "equality" in the way both the authorities and media handle such incidents.