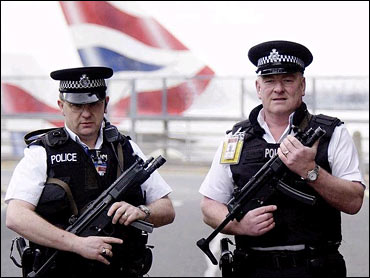 A much-disrupted British Airways flight from London to Washington, D.C. has been canceled again over security fears, the airline said Thursday.

British Airways said Flight 223 from Heathrow to Washington's Dulles Airport would not fly on the coming Sunday. Monday's Flight 263 from London to Riyadh, Saudi Arabia also was scrapped.

The airline said the decision "follows government advice to cancel those flights for security reasons." The 184 people booked on the Washington flight and 149 Riyadh passengers would be rebooked on other flights or given a refund, the airline said.

BA said the return flights to London would operate as scheduled.

Flight 223 has been delayed or canceled eight previous times this year because of U.S. security alerts. Saudi flights also have been canceled several times.

Officials in Britain have refused to say what intelligence prompted them to advise cancellation of the BA flights, but U.S. authorities have spoken of a "specific and credible" terrorist threat to international flights.

Security experts outside government speculate that concern focuses on the timing of the specific flight: when they would be in the air over major cities and the nagging worry it might still be possible for terrorists to smuggle explosives on board a commercial jet, CBS News Correspondent Richard Roth reports.

"We take our lead from the advice we take from the government as to what action to take," a BA spokesperson told the BBC.

Disruption to flight 223 began Dec. 31, when the plane was kept on the tarmac at Dulles for several hours after landing, while U.S. authorities questioned passengers and crew.

BA scratched the same service the following two days and several times after that, most recently on Feb 2. When the flight has gone ahead, it has sometimes been delayed for hours for stringent checks on passengers. The carrier's two other daily flights to Washington have not been affected.

Last August, BA suspended service to Saudi Arabia, where the British government warns of "a continuing threat of terrorism," after local authorities broke up a cell that reportedly was plotting an attack on a British plane. Service was restored in September.

Several Paris-based Air France flights to the United States and a Continental Airlines Glasgow-to-Los Angeles flight also have been canceled in the past few weeks.

Air France said Thursday that its flights were running normally and there had been no cancellations for security reasons.

Some European officials have questioned the need for the flight disruptions, and Britain's pilots' union has expressed concern over the "erratic" nature of the intelligence leading to the cancellations.

On Thursday, the group's general secretary, Jim McAuslan, accused U.S. officials of overreacting. "Safety and security is our priority but we now believe that the United States intelligence service is jumping at shadows," he said.

A U.S. request for armed "sky marshals" to travel on flights thought to be at risk also has caused friction, with Britain's Air Line Pilots' Association expressing strong opposition to the idea.

British Airways said marshals might be acceptable in some circumstances, but that it would scrap flights if there were concerns about security.

A spokesman said the government had not requested sky marshals for the two canceled flights.