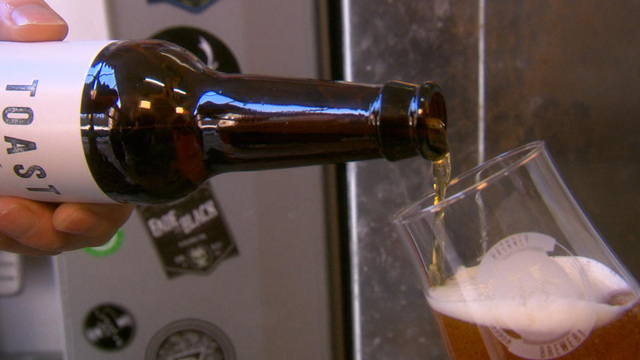 Inside a craft brewery in East London's Hackney, good old-fashioned beer is being paired up with another classic ingredient.

In the hands of Swain and his partner Tristram Stuart, unused bread is getting a second chance at life.

Each bottle of their beer, Toast Ale, contains one heel of bread -- the last slice of the loaf no one ever eats.

London sandwich makers toss tons of fresh heels away, which got Stuart thinking.

"They were throwing away 13,000 slices every single day of operation. The way we're doing it, that's 13,000 bottles of beer that could come out of that factory every single day," Stuart said.

Stuart is a global food waste activist. His organization, Feedback, draws attention to the growing problem.

One-third of the world's food goes to waste every year, and bread is among the worst offenders. In the U.K. alone, 44 percent of perfectly good bread is tossed.

Now, that waste is going to good use.

Swain took CBS News on a tour of his brewhouse to show how Toast is made -- from the moment the fresh bread arrives, is collected, then weighed, direct from sandwich shop kitchens.

After boiling the brew to kill any bacteria, the recipe of bread -- hops, malt and yeast -- takes several days to ferment, with taste tests conducted along the way.

After six days, beer and bread, the two major food groups, have joined together. Toast is fully mature, and the final product is ready.

The unique flavor is bottled and sold with all of the proceeds going directly to Stuart's organization.

"We've had interest from Peru, Switzerland, Czech Republic, up and down the United Kingdom, Iceland," Stuart said. "This is an idea that really does work in so many different cultures -- you need a culture that eats bread and one that drinks beer, and that's pretty much everywhere."

"We want to kick off a local craft brewing revolution at the same time as kicking off a food waste revolution," Stuart said.

It's a sobering message in a bottle -- served up one slice at a time.

Harris: Biden "in command" at State of the Union despite GOP "gamesmanship"