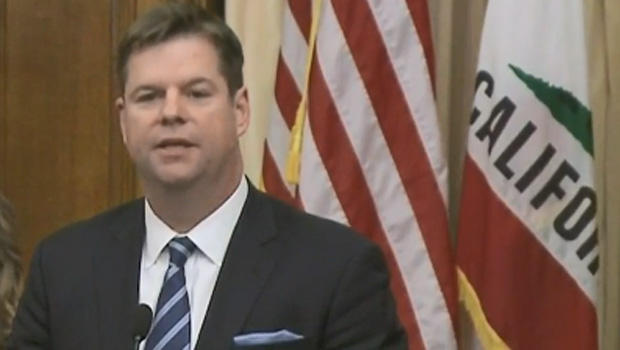 SAN FRANCISCO -- The San Francisco Board of Supervisors on Tuesday appointed one of its members, Mark Farrell, to serve as interim mayor until a new mayor is chosen in a citywide election in June.

Farrell was approved for the role 6-3 after the board voted down its president, London Breed, who had been serving as acting mayor following the unexpected death of Ed Lee in December. Farrell was sworn in soon after.

The vote came after hours of impassioned public comment from San Francisco residents, many of them saying racism was behind the board's moves to have someone serve as acting mayor instead of Breed, who is a black woman.

Some of those commenters booed, jeered and yelled "shame" when the board chose Farrell, a white man who represents an affluent part of the city.

The decision drew an angry response from the audience, which was stacked with dozens of Breed's largely African-American supporters who had lined up to speak in her favor during several hours of public comment before the vote, reports CBS San Francisco.

Critics, including some on the board, said that Breed, who is running for mayor, shouldn't have a leg up on the other seven candidates in the June 5 contest. Farrell isn't on the ballot.

Some also said they were uncomfortable with Breed serving as both mayor and board president, and some residents of her district complained they want a supervisor fully dedicated to their needs.

Kim also was nominated Tuesday night for interim mayor, but declined the nomination.

The mayoral election had been scheduled for November 2019 but was moved to June after Lee, a Democrat, died of a heart attack in December. The winner will serve out the rest of Lee's term.

The city's next mayor faces discontent in a city that's thriving economically but plagued by excessive property crime and high housing costs. The median home value is nearly $1.3 million and the median rent is $4,400.