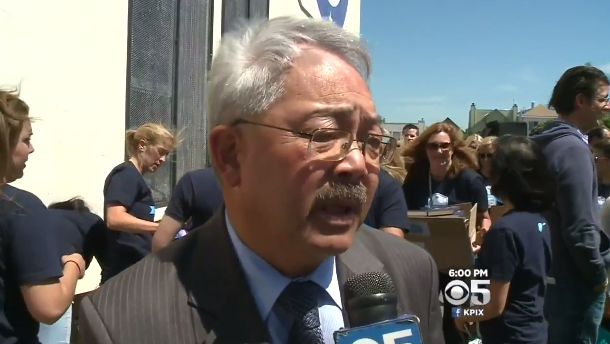 In a short news release, officials said Lee passed away on Tuesday, December 12 at 1:11 a.m. at Zuckerberg San Francisco General Hospital. Family, friends and colleagues were at his side.

Former San Francisco Mayor Willie Brown, a close personal friend of Lee's, said the mayor was shopping at Safeway when he collapsed last night and rushed to the hospital.

"Anita sent him to do his family chores," Brown said. "He never moved away from being a husband and a father as a mayor."

His death was announced by officials early Tuesday.

"It is with profound sadness and terrible grief that we confirm that Mayor Edwin M. Lee passed away," the statement read. "Our thoughts and prayers are with his wife Anita, his two daughters, Brianna and Tania, and his family."

Lee was appointed as mayor by the Board of Supervisors on January 11, 2011 after Newsom resigned to become Lieutenant Governor. He won election on Nov. 8, 2011 and was re-elected in 2015.

Lee was among four candidates to replace Newsom, but initially said he was not interested in the job. At the urging of Brown, the late Chinatown power broker Rose Pak and Sen. Dianne Feinstein, he tossed his name into the selection process.

"Those of us who helped orchestrate his selection as interim mayor knew he was going to be an important figure," Brown told CBS San Francisco.

"Those of us who helped orchestrate his selection as interim mayor knew he was going to be an important figure," Brown said. "He clearly was important in the symbolism of the mayorship. His being the first person of Asian descent in a major American city in this nation was in and of itself decisive."

As he talked about Lee, who was head of purchasing and public works for the city when Brown was mayor, his voice cracked with emotion.

Over the last year, Lee has been at loggerheads with President Donald Trump over immigration. San Francisco, under Lee, has been a leader among American cities in the Sanctuary City movement.

Lee served was a director of San Francisco's Human Rights Commission from 1991 to 1996 and served Newsom as the City Administrator from 2005 to 2011. He grew up in public housing in Seattle and worked early in his career as a civil rights attorney often representing low-income tenants.