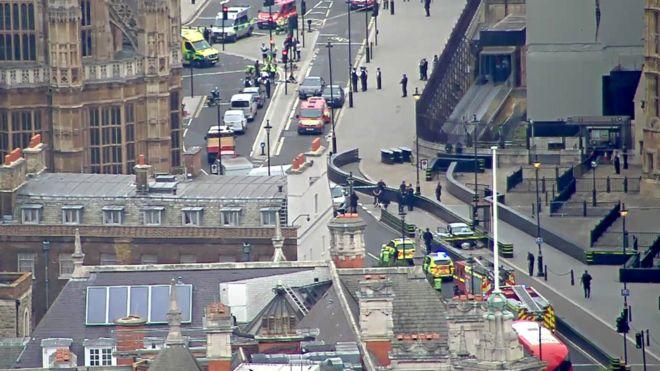 LONDON -- London's Metropolitan Police said Tuesday that a man was under arrest on suspicion of terrorism after driving through a group of pedestrians and then ramming a gate outside the Houses of Parliament in the British capital. Police said they were treating the crash as a terrorist incident, and noted that the investigation was being led by their counter-terrorism division.

"The driver of the car, a man in his late 20s, was arrested at the scene by armed officers... He was arrested on suspicion of terrorist offences," the Metropolitan Police, also known as the Met and Scotland Yard, said in a statement, adding that there was nobody else in the vehicle at the time of the crash and that no weapons were found.

"At this stage, we are treating this as a terrorist incident and the Met's Counter Terrorism Command is now leading the investigation," the police said.

Streets in the area surrounding the British legislature were cordoned off and closed to traffic during peak morning rush hour and there was a heavy police presence. London's ambulance service said it treated two people at the scene that they were taken to an area hospital for further evaluation, but their injuries were not believed to be serious.

Witnesses told British television networks that they saw the car driving toward Parliament at high speed. Video captured by a security camera with a high vantage point, aired by BBC News, shows the small car abruptly turning across several lanes of slow-moving rush hour traffic and entering the security channel outside parliament, appearing to accelerate before slamming into the barrier.

Assistant Commissioner Neil Basu, head of Scotland Yard's Counter-Terror Command, told reporters later Tuesday morning that only one of the three pedestrians injured in the incident remained in hospital, with non-life-threatening injuries.

Basu said that it was being treated as a "terrorist incident" as it "appears to be a deliberate act" at an iconic site, but he added that, "no other suspects have been identified or reported to police" and that there was not believed to be any further danger to the public in connection with the incident. He said the priority for investigators was to identify the suspect and his motives, but that he was "not fully cooperating" with police.

Two vehicles, which appear to be police vans with their lights flashing, can be seen behind the car shortly before the crash in the video of the incident aired by the BBC. Basu said the suspect's car was not being followed just before the incident.

"I think it looked intentional - the car drove at speed and towards the barriers," Ewalina Ochab told Britain's Press Association. "I was walking on the other side (of the road). I heard some noise and someone screamed. I turned around and I saw a silver car driving very fast close to the railings, maybe even on the pavement," she said.

Barry Williams, another witness, told CBS News partner network BBC News that he saw the silver car "heading towards cyclists" while driving on the wrong side of the road. He said the cyclists were waiting for the lights to change, adding: "He hit the cyclists and then swerved over towards the safety barrier... and accelerated and hit it at quite high speed."

"I don't know whether he meant to hit the cyclist, they may just have been in the way, but he accelerated hard towards the barrier," Williams told the BBC. He said the car "actually came off the ground and landed again" as it slammed into the barrier and there was "a lot of smoke."

Williams said there were, "about 10 cyclists waiting for the lights to change, I don't think he hit all of them, he hit about four or five," one of whom Williams saw get up and start "to chase the car."

The vehicle involved, a small silver Ford hatchback, could be seen with its front end smashed into the security barrier at a vehicle security checkpoint in the parliament perimeter fence.

Westminster station on the London Underground, or Tube network, the closest station to the Houses of Parliament, was closed for about five hours due to the incident but was reopened later Tuesday afternoon.

CBS News correspondent Debora Patta notes that most British lawmakers were not at work on Tuesday, on their summer vacations, and that the area would normally have been much busier.

President Trump also reacted to the incident, calling it "yet another terrorist attack in London," and calling for "these animals" to be "dealt with through toughness and strength."

The crash comes about a year and a half after a terrorist drove his car into a number of people outside parliament and then attacked others with a knife, leaving a total of four people dead. Police said Khalid Masood -- a 52-year-old Briton with convictions for violence who had spent several years in Saudi Arabia -- was believed to have acted alone in the attack, but that he may have been inspired by others.

The Islamic State of Iraq and Syria (ISIS) claimed Masood was a "soldier" responding to its repeated calls for attacks on western nations. Police said, however, that they found "no evidence" of any links to ISIS or al Qaeda.

Masood was killed by police after fatally stabbing an officer and running down pedestrians with his rented SUV. It was the deadliest extremist attack in Britain in 12 years.