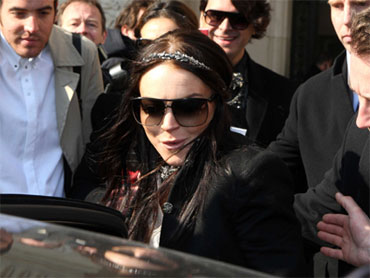 Lindsay Lohan's father wants her forced into rehab, but not jail, according to his lawyer, Lisa Bloom, who happens to be a CBS News legal analyst.

Lindsay is currently on probation for a 2007 DUI conviction, but has said publicly she's sober,

The letter, Bloom observed, asks that "in the event that Lindsay is in violation of the term of her probation, namely that she attend weekly alcohol education classes, then Michael would like the judge to order her into a residential rehab program. And he's done extensive research behind-the-scenes and found a program that he thinks would be the best for her. It's close to her family on Long Island. The family could all participate in family therapy. She could be given appropriate treatment for what he thinks are her problems, namely prescription drug abuse."

How can any judge tell whether Lohan has indeed violated the terms of her probation?

"It's a simple matter," Bloom replied, "and we have (from) credible sources that she has missed a couple of classes. The judge's order was very clear that she had to attend once a week. The alcohol education program will submit a report to the court as to whether she's in violation or not by the next hearing date, which is May 20.

"Michael Lohan does not favor incarceration for his daughter. Instead, he wants her to go to rehab."

Bloom says a move like the one Michael Lohan is making isn't unusual, pointing out that, "Family members weigh in frequently when a close family member, a defendant, is facing sentencing or facing additional terms of their probation. We saw that in the celebrity case recently where Michael Douglas weighed in the sentencing of his son. And Michael and Lindsay do have a relationship. They text. They do speak to each other occasionally, and he loves his daughter very much. For his shortcomings and his flaws and his mistakes that he's made in his life, which he freely admits (he's been in jail himself; he's been clean and sober for six years), he loves his daughter and he wants the best for her."

"He's not seeking to control her or control her estate. If you read the letter that we wrote on his behalf, he's asking that she be ordered to residential rehab. He certainly wouldn't get any money from that in any way. He's also asking that, if the judge does not see fit to order that, that she be subjected to random drug testing as an additional term of her probation, as many people who are on probation for drug offenses are."