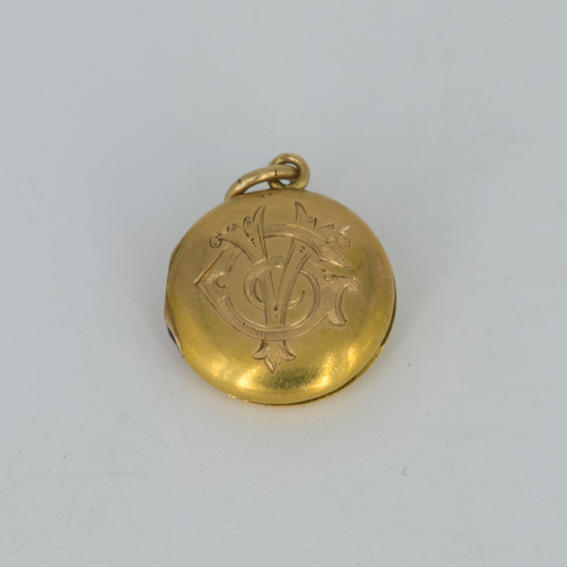 NEW YORK -- Unlike the fictional film character Rose, Virginia Clark’s love story started before she boarded the Titanic in 1912. But Clark’s story shares one devastating similarity to the fictional character: it ends in tragedy -- as she, too, said goodbye to the man she loved that night.

Clark also left behind an 18-carat gold locket, which was discovered inside a small carry-on bag that was recently recovered from the Titanic’s wreck site.

Poker chips, several pieces of jewelry and a gold-plated toiletry item were also found inside the bag that belonged to Clark and her husband, Walter.

Walter, his father and his uncle, prominent U.S. Senator William Andrews Clark, were mining magnates in Los Angeles in the early 1900s. They built a railroad that facilitated shipments of metal ores between Los Angeles and Salt Lake City, Utah, with a connecting point in Las Vegas, Alexandra Klingelhofer, vice president of collections for Premier Exhibitions, Inc., told CBS News.

He met his bride while visiting his home state of Montana.

The first-class passengers boarded the “ship of dreams” at a port in Cherbourg, France, as a belated honeymoon trip. They booked a trip on the Titanic in hopes they would make it home in time for their 2-year-old son’s birthday.

“Sadly, Walter did not make it, but Virginia did,” Klingelhofer said.

Working as a historian, curator and researcher, Klingelhofer has been helping identify lost artifacts from the wreck of the RMS Titanic for more than eight years. This recent discovery was easy to put together, given Clark’s unusual initials, “VC,” which are engraved on the locket.

It’s also known, according to Klingelhofer, that Clark ran to find her husband after she felt the ship hit an iceburg. Walter was playing poker with friends in a smoking lounge at the time.

“When we found those poker chips, everything kind of looked right,” Klingelhofer added.

Like most of the the other male passengers, Walter helped his wife onto lifeboat No. 4 and stayed behind.

“There was room for him,” Klingelhofer said. “When you get down to the water you can see there was room, but it’s too late at that point.”

The intials “S.M.” were also found on a gold-plated toiletry item. The “M” likely stood for “McDowell,” Clark’s maiden name. Klingelhofer believes it was meant to be a present for a relative.

An online database of information about the Titanic and its passengers claims Clark died on December 21, 1958, so there’s not really a direct line to her relatives, Klingelhofer explained.

The Clarks’ story and other items from the Titanic will be on display on April 12 at Titanic: The Artifact Exhibition inside Las Vegas’ Luxor Hotel and Casino ahead of the 105th anniversary of the ship’s sinking on April 15, 1912.

Klingelhofer said she has a rewarding task of looking at pieces closely and seeing if she can find ways to identify where they came from, where they were made and who they belonged to.

“It’s a very rewarding task and it allows me to contribute also to the legacy of Titanic in a personal way,” she said.